In an ideal world, it probably wouldn’t be necessary for the BBC to advertise itself like this.

Blame Trainspotting: Lou Reed’s “Perfect Day,” arranged and produced in 1972 by Mick Ronson and Bowie, had a second life a quarter of a century later, thanks in part to Danny Boyle’s film. As Boyle used it to score a heroin overdose sequence, “Perfect Day” was subsequently interpreted by an entire generation as being a song about scag.

Sure, maybe it was: you could read the song that way. But it’s more interesting to take “Perfect Day” at its word. An alienated, drugged-out wastrel spends a day in the park with his girlfriend or boyfriend. He does “normal” things—goes to a zoo, sees a film, has a picnic—which seem surreal to him. His life is so bent out of shape, his way of viewing the world so corroded, that banal existence has become strange and beautiful. The perfect day for him is one that the good and prosperous people of the world would forget about in a week. And what to make of the closing line? You’re going to reap just what you sow, Reed sings sweetly and ominously. Has he reformed? Or is he just clearing his head to ruin his partner’s life with greater force?

A few months after the first Labour parliamentary victory in nearly 20 years, the BBC made a celebration and a justification of itself, a four-minute promotional film featuring the stars of pop, country, R&B, jazz (well, they got Courtney Pine) and classical. All singing lines from “Perfect Day.” The promo film was masterfully shot and cut (Simon Hanhart produced the music), making a smooth whole out of what could have been an ungainly patchwork. There was a clamoring for the track to be released as a single, and soon enough it was, with all proceeds going to Children in Need: it would be Bowie’s last (collaborative) #1.

Jane Frost, the BBC’s head of corporate marketing, was the force behind it. After tenures in marketing for Lever Brothers and Shell, Frost was recruited by the BBC in 1995: her main job was to explain the service’s role to a new generation, using the language of pop videos and advertisements. The BBC had just won a battle to raise its license fee (the fee for color TVs would increase from £71 in 1990 to £104 in 2000) and in Frost’s words, it wanted to remind viewers what they would miss if it ever went away (“if it disappeared, you really would be losing something”).*

Assembling an all-star cast to sing Reed’s “Perfect Day” was Frost’s first big set-piece. “The production values are high, because we want to catch people’s attention—they’ve got to be a cut above the standard of the old public information films,” she told the Guardian in 1999. “But you’d be surprised how cheaply you can make something when the goodwill is there.” Most performers accepted standard minimum Equity payments of £250, while Bowie went one further: he waived his fee, citing the “years of pleasure” given to him by The Flower Pot Men. 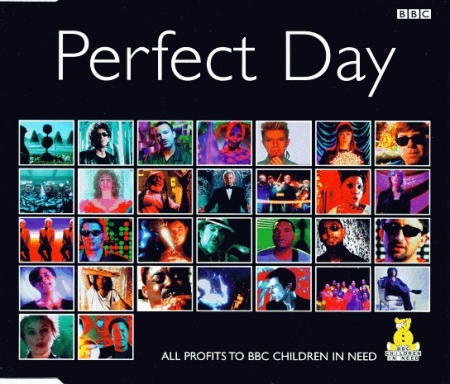 As for the production itself, it’s easy enough to criticize: its overstuffed wedding cake of an arrangement, the pomposity of some of its performers (Bono, giving off a comfortable smugness here, takes the crown, though Huey Morgan is a viable contender), its inadvertent comic moments (Reed apparently doing a Stevie Wonder impersonation; a ludicrous Evan Dando cameo). For Bowie fans, his two lines, which he sings with a trace of wry bemusement, was evidence that Bowie should’ve covered the song himself, though there’s no evidence he ever considered it.

Still, of all the Bowie collaborations, “Perfect Day” contains the greatest amount of sheer vocal talent (Tammy Wynette, Heather Small, Emmylou Harris, Gabrielle) and it’s the only Bowie duet, if only by montage, with the likes of Brett Anderson, Boyzone, Dr. John, Shane MacGowan (appearing with great comic timing) and Tom Jones, the latter filmed singing “you’re gonna REEEAAAAP” as if auditioning for the part of Galactus.

Amid all the exquisitely-framed shots and cheery goodwill and sense of “culture,” was there someone forgotten? The man from Hull who, sitting down and hearing Reed play “Perfect Day” on guitar at Trident Studios, had suggested it would work better as a piano song? And who’d then played the piano line himself, and later scored the strings? So take the Beeb’s “Perfect Day” for whatever you’d like—as a fine or a ludicrous spectacle, as a pleasant way to support charity, as a latter-day career boost for Reed, as a fine public service message. I’ll take it as a secret requiem for Mick Ronson; a world’s worth of performers unknowingly singing their respects to him.

* In this context, a few critics at the time noted an implied threat in the increasingly ecstatic repeats of “you’re going to reap what you sow.”

Covering “Waiting For the Man” gave the young David Bowie a hint of street cred, covering “White Light/White Heat” just gave him power. As Bowie and the Spiders honed their live act, they swapped out the likes of “Starman” and “Andy Warhol” for bruising workouts like “White Light,” whose relentless drone rhythm and severity of design (mainly just thrashing on G and D chords, then thrashing on F at the end) made it a hard contrast to the more fanciful Hunky Dory and Ziggy Stardust songs. It was a staple of the Ziggy tour by May 1972, and Bowie would play it for decades.

Giving prominence to “White Light/White Heat” and “Waiting for The Man” also helped Bowie bring Lou Reed into his rapidly-expanding sphere of influence and in July 1972, Reed played his first-ever UK concert as Bowie’s guest. Bowie and Mick Ronson produced Reed’s Transformer* over a manic six weeks in the summer of ’72, working with Reed during the day, playing concerts across the UK at night. Reed, drugged into near-catatonia, needed a translator to understand Ronson; Bowie sometimes was found in the studio bathroom weeping; Ronson did much of the work and his touches are all over the record, like the soaring string arrangement on “Perfect Day.”

“White Light/White Heat” is mainly about the joys of speed, though VU chronicler Richie Unterberger said in a Well interview last year that another possible influence was Alice Bailey’s “A Treatise on White Magic,” which delves into astral projection “all down a stream of pure White Light.'” (Reed reportedly mentioned the book in radio interviews and Unterberger interviewed a fan who recalled Reed babbling about psychic healing via “light projection.”) Bowie likely had no clue about this when he covered the song, though it’s fitting given his own interest in astral projection (“Did You Ever Have a Dream”). “White Light” was transcendence, chemical or no.

Bowie recorded two versions of “White Light/White Heat” in May 1972 for the BBC, and the song was central to the 1972-1973 Ziggy tours; a recording from the last Spiders concert in July 1973 was issued as a single a decade later (RCA 372) to promote the concert film Ziggy Stardust: the Motion Picture. Bowie recorded a version of “White Light” in 1973 for his covers LP Pin-Ups but eventually scrapped it, with Ronson using the backing track for his own cover on 1975’s Play Don’t Worry.

* It’s been repeatedly claimed, even in credible Bowie biographies like Strange Fascination, that Bowie secretly wrote “Wagon Wheel,” a forgotten track on Reed’s Transformer. To my knowledge, this is bunk (seriously, “Wagon Wheel”?), and there appears to be some proof dispelling the rumor—a tape allegedly exists of Reed singing “Wagon Wheel” in New York in 1971, a time when he had only met Bowie once at a nightclub—but doubtless this bizarre legend will persist for decades to come.