In the Heat of the Morning 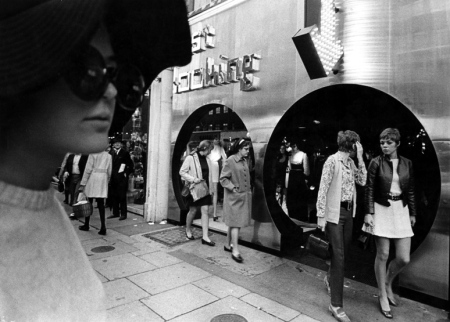 This marks the end of the line for David Bowie and his label Deram: it was the second single Bowie recorded that Deram rejected, despite the fact that, as with “Let Me Sleep Beside You,” Bowie was writing more commercial songs than he had in the past. It didn’t matter: Deram just wanted rid of him and Bowie left the label in April 1968.

So “In the Heat of the Morning” is a fragment of an uncompleted work. It was meant to be the centerpiece of Bowie’s second Deram LP, and Bowie and Tony Visconti do their best to shine it up: another luxurious strings arrangement, some odd instrumentation (guitar doubled with the Sooty Pixie Xylophone, the latter played by Tyrannosaurus Rex’s Steve Peregrin Took, who dubbed it the “Pixiephone”) and a Bowie vocal that’s ditched the Anthony Newley-isms for a sultrier, more commanding tone. Like “Sleep Beside You,” it’s basically a come-on with pretensions, but, hey, those can work sometimes.

First recorded in a BBC session on 18 December 1967, though the lyric was different and worse (“where cunning magpies steal your name“) and the opening riff hadn’t been developed yet. The proposed Deram single version was cut on 12 March 1968 and another BBC version was recorded a day later (as with “Karma Man,” the BBC version of this song might be its definitive recording—there’s more guitar, and Bowie’s vocal and the beat are much stronger, IMO). On Deram Anthology. Covered by The Last Shadow Puppets on their 2008 EP “The Age of The Understatement.”

Top: Shopping on King’s Road, 1968 (Another Nickel In the Machine).

The much-discussed surrender of John, Paul, George and Ringo to the soothing influence of the Maharishi Mahesh Yogi makes, in my view, depressing reading…The unfortunate Beatles, like many of us, it seems, are in grave danger of coming into contact with the Spirit of Universal Truth, an unhelpful tipple which has in the past turned the great mind of Aldous Huxley to mystical blotting paper.

There’s high, and there’s high, and to get really high—I mean so high you can walk on water, that high—that’s where I’m going. The answer’s not pot, but yoga and meditation, and working and discipline, working out your karma.

All at once, or so it seemed, the pop aristocracy of the UK turned to “Eastern” religion. Seemingly everyone was now devising his or her personal path to enlightenment: Pete Townshend with Meher Baba, Richard Thompson with Sufi Islam, even Dave Davies was reading Vivekananda’s Rajah Yoga. And of course The Beach Boys, Donovan and The Beatles had found the Spiritual Regeneration teachings of the Maharishi, a sort of pop fusion of Buddhism, Hinduism and even stray bits of American “power of positive thinking” boosterism.

The mystery is explained in part when you consider that many of these people had been taking LSD in great doses for a long time (Tony Visconti and his wife tripped once a week for a whole year, for example, and Visconti eventually became a Tibetan Buddhist). Eastern teachings resounded with celebrities who were trying to make sense of a world in which “all limits had been magically removed” (Bernice Martin). Also appealing was that many of the Eastern religion varietals on display didn’t require much in terms of material renunciation or moral strictures from novitiates.

The “new” religions also had appeared in somewhat of a vacuum. Since the late ’50s, there had been a general falling off in religious observance among the young in the UK (you might recall John Lennon’s infamous “we’re more popular than Christ” comment was specifically about British teenagers). So Buddhism, Confucianism and Hinduism, particularly the watery blends offered by various celebrity mystics and sages, found little competition. Buddhism in particular was hip with the young because it had no ruling omniscient god who mandated antiquated moral codes, and its priest caste was best known for a) protesting war and b) wearing colorful psychedelic outfits. It was seemingly devoted solely to the “now,” and was misinterpreted as something of a Pop religion.

David Bowie had been studying Tibetan Buddhism since 1965, if not earlier. So while his “Karma Man,” which he cut a few days after The Beatles and their spouses had decamped (in a blaze of press coverage) for Bangor, Wales, to be initiated into the Maharishi’s teachings, may have seemed like a trendy affectation, it was actually a sequel to Bowie’s earlier Tibetan homage “Silly Boy Blue.”

That said, by late ’67, Tibetan Buddhism was just as trendy as the rest of the lot. For many weekend Buddhists, “Tibet” was something of an Atlantis in the mountains, the land of Shangri-La, the site of the Lost Continent of Mu; it was a magic kingdom in which everyone was holy and wasn’t hung up on material things. ITC’s 1968 TV drama The Champions, for example, featured secret agents crashing their plane in Tibet and being healed (and given superpowers) by lamas. (Identifying as a Tibetan Buddhist would eventually become a political act, as taking the side of the Tibetans drew down the wrath of the student Maoists of 1968, some of whom heckled Bowie’s mime performance Yet-San and the Eagle, which featured “Silly Boy Blue.”)*

So something has changed since the days of “Silly Boy Blue,” which was a realist attempt to depict Tibetan culture, to the point where it sounded a bit like a National Geographic article turned into a pop song. “Karma Man” is nowhere as literal—its title figure, clad in saffron robes and kneeling on the floor in meditation, is something of a Buddhist superhero (even the name’s right out of Doctor Strange). He seems akin to Ray Bradbury’s Illustrated Man, with sigils and runes tattooed on his skin that offer lost wisdom and future prophecies. Bowie’s Karma Man is also now set in opposition to the West—the deceived and the blind mock him, consider him a carnival freak, and keep trying to slow him down.

Recorded on 1 September 1967 as the proposed B-side to “Let Me Sleep Beside You” (an attempt at nirvana for the flip side of an ode to maya); on Deram Anthology. A live recording (a BBC session arranged by Visconti on 13 May 1968 and available on Bowie at the Beeb) is so superior to the studio take that I think of the latter as merely a rough draft. A version was allegedly recorded for Toy: one of the few recordings from those sessions yet to leak.

*A point originally made by Tat Wood and Lawrence Miles, in About Time 2, a study of cultural influences on Patrick Troughton-era Doctor Who.

Let Me Sleep Beside You

Tony Visconti, a 22-year-old bass player from Brooklyn, came to the UK in April 1967 to illegally work as an apprentice record producer. He managed to convince Customs that he was traveling with four guitars because he was a dedicated vacationing musician who had to practice on each guitar daily. In New York he had caught the eye of British producer Denny Cordell by writing a complete arrangement for a Georgie Fame overdub session in an hour’s time, and once in the UK Visconti was put to work on tracks by The Move (“Cherry Blossom Clinic,” “Flowers In the Rain,” “Mist on a Monday Morning“) and Manfred Mann (“So Long Dad“).

Soon after David Bowie’s LP was released in June ’67, Visconti met Bowie at the office of David Platz, Cordell’s business partner and Bowie’s song publisher. Platz thought the two might hit it off as Visconti already had a reputation of being able to work with “hard to understand” artists (e.g., Marc Bolan, whose band Tyrannosaurus Rex Visconti would soon convince Cordell to sign). The first thing Visconti noticed was that Bowie had different-colored eyes. The two talked about American music for hours (both were fans of Ken Nordine‘s Word Jazz LPs), went for a walk in Chelsea, saw Roman Polanski’s Knife in the Water together and had become fast friends by the end of the day. So when Bowie went in to record a new prospective single for Deram at summer’s end, he asked Visconti to arrange and produce it.

Bowie often has been reliant on his producers, using them as interpreters, mirrors, secondary composers, performers, muses and casting directors. Along with Gus Dudgeon, Visconti was the first of the major Bowie producers, and where Dudgeon’s work is that of someone fleshing out an unusual, occasionally brilliant sketchwork (the role George Martin often played with John Lennon), Visconti’s style is both practical in its studio realism and aggressive in its scope: feeding, then realizing, Bowie’s nascent ambitions.

Visconti helped convince Bowie to push “Let Me Sleep Beside You” as his next single, flattering Bowie by pronouncing the song “almost American.” Also, Bowie was dead broke—his LP had stiffed—so “Sleep Beside You” was a bald attempt to ape the success of the Stones’ “Let’s Spend the Night Together” (blunt requests were in vogue). It marks a turn away from the eccentricity and provincial theatrics of Bowie’s earlier Deram material, as “Sleep Beside You” is a basic rock & roll sex song, just sweetened up and given to putting on airs.

It’s a fairly basic composition—the chord progression of the verse (C-Bb-F)  has become so cliched that it’s simply dubbed “the classic rock progression” in Richard Scott’s music theory guide (it’s used in everything from The Who’s “Won’t Get Fooled Again” to ZZ Top’s “Sharp Dressed Man”). Visconti offers stage settings and mood lighting: a cello section; a dominant bass that doubles Bowie’s initial sung hook; and drums (by Alan White, later of the Plastic Ono Band and Yes) that serve as accents and occasional fireworks—the acoustic guitar (Bowie?) is what really drives the track. The strings are a moody, luxurious contrast to the wind-based arrangements that had dominated Bowie’s first LP and “Laughing Gnome” single. In the first verse, the strings repeat a five-note pattern, then offer a series of long-held notes until, after the song peaks with the bridge, Visconti gives the cellists a whole eight-bar verse to sweep through.

What works is the restraint: Bowie and Visconti set up hooks but don’t overuse them (the opening distorted guitar riff (likely played by John McLaughlin) doesn’t appear again until the fadeout, for instance), while Bowie’s figured out how to best display his voice—go low on the verses, high and imperious on the bridge, where he’s trying to close the sale.

“Let Me Sleep Beside You” is a rake’s come-on in the well-worn style of Andrew Marvell and Robert Herrick—the singer frames his seduction as being empowering, the rake merely serving as a means of liberation. He appeals to youth’s vanity; he flatters his conquest with the promise of her alleged maturity: “Brush the dust of youth from off your shoulder/because the years of threading daisies lie behind you now,” Bowie murmurs, keeping a straight face. “Lock away your childhood…child, you’re a woman now/your heart and soul are free.” (Neil Diamond’s “Girl You’ll Be a Woman Soon” had been released as a single in April ’67, and so might have been an influence, but then again the late ’60s were rife with “girl, you’re a woman now” type of lyrics.)

It’s the most lustful Bowie song since “Liza Jane,” but as the track goes on, its aim seems less about Bowie bedding the girl than Bowie wanting to convince the listener that he really is a seductive, charismatic rock star (the promo film for the song, made in early 1969, has Bowie burlesquing the image of rock-star-as-sex-god, years before Ziggy). Bowie’s at last hit on the idea that a reflection, perfectly arranged, of an Elvis-Jagger figure will serve just as well as the original.

Recorded on 1 September 1967. Deram’s review board uniformly rejected it as a single, and it wouldn’t be released until the 1970 patchwork LP World of David Bowie that Deram issued to cash in on Bowie’s post-“Space Oddity” fame; on Deram Anthology.