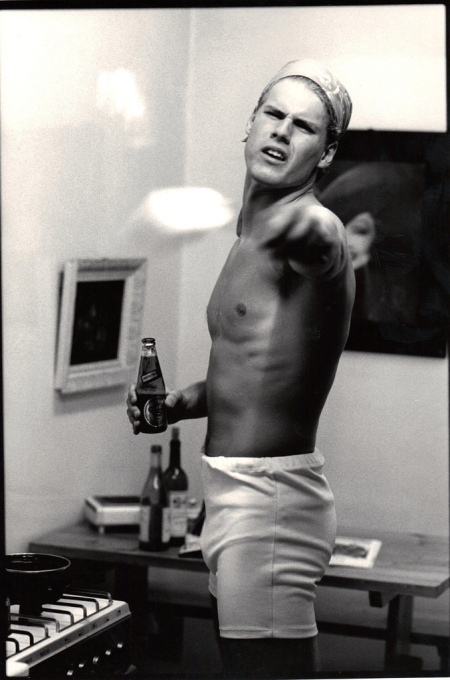 It helps that Bowie undermines “Stateside”‘s gassy blooze rock with some gonzo contributions (he’s credited as co-writer of both words and music). There’s his squib of a saxophone solo, Bowie hardly bothering to come up with a melody, his tone so dwarfish that it sounds as though he’s tootling on a plastic toy. It seems a mockery of the cliche wailing sax middle-eights of Eighties power ballads and bar-belters. Better still is the Bowie-penned bridge (repeated towards the close), which ridicules Hunt’s homeward longings, offering a Trash Americana landscape: inflatable Marilyn Monroe dolls and Kennedy convertibles (still blood-stained?), with lines pilfered from Gershwin/Heyward’s “Summertime,” “Home on the Range,” and, naturally, the band America itself.

“Stateside” is also of meager interest for being one of the few “straight-up” unironic R&B tracks that Bowie ever recorded (even here, he still spoofs it). Ever since “Liza Jane” Bowie had tried to find (or piece together) some dialect of R&B that he could converse in. He had loved the music, had spent his youth delving into it, but found he couldn’t channel it directly—he had to approach at an angle. Ziggy Stardust is in part James Brown as Pierrot. And Bowie’s two main offensives were the harrowed soul and funk of Young Americans and Station to Station, and the brighter Let’s Dance, which, as Bowie said in 1991, was the “rediscovery of white-English-ex-art-school-student-meets-black-American funk, a refocus of Young Americans.” These records would have been inconceivable without the agency of Luther Vandross, Carlos Alomar, Dennis Davis, George Murray, Omar Hakim and Nile Rodgers. In a way, Bowie considered them the control, his own relentlessly ironic persona the experiment: the albums were the transcripts of their collisions.

So “Stateside” offered a cheap alternative, for once. The Saleses had cut their teeth playing R&B, and “Stateside” is meat-and-potatoes white “trad” R&B, of the sort that you can hear in some biker bar in South Carolina on any given evening. It drags along, satisfied with its loping pace, Tony Sales occasionally walking his bass. Reeves Gabrels’ two lengthy, awful solos are the variable—are they in quotation marks, intentionally meant be the sort of garish cliche-strewn lead lines that you’d hear from Blues Hammer, or is Gabrels just saying, “fuck it, it’s Hunt’s song,” and plowing away without taste or inspiration? Either interpretation works.

Pure album filler, “Stateside” passes without too much pain. Live, it was toxic. Extended beyond its already-elephantine length, inflicted upon an unwilling audience by its author, who had the tenacity and taste of a drunken wedding toastmaster, “Stateside” became hateful. (Bowie often checked out during performances—you’ll see in the clip above that he takes a cigarette break during one of Gabrels’ solos). I wouldn’t be surprised if one reason Bowie broke up Tin Machine was his desire to never play the thing again.