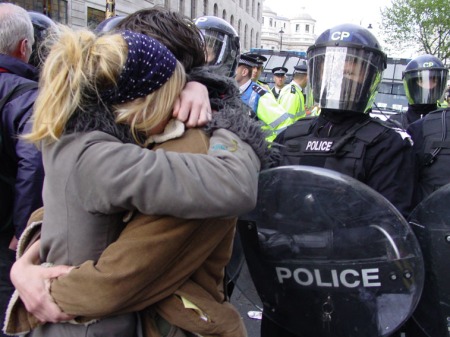 At his final (to date) Tibet House benefit concert in February 2003, Bowie duetted with Ray Davies on the latter’s “Waterloo Sunset.” Soon afterward Bowie recorded a cover of the song, at first slotted for Reality and ultimately issued as a bonus track. Apart from his cover of “Where Have All the Good Times Gone?” on Pin Ups, it’s Bowie’s only overt Kinks homage,* but Davies was far greater an influence than this suggests. He was a fundamental element for Bowie; he’s in the bedrock of Bowie’s songwriting.

Bowie had met Davies in 1964, when the former’s King Bees were on the same bill as the Kinks for a brief tour of southern Britain, and for a time Bowie and Davies shared a producer in Shel Talmy. But Davies existed more as a guide on records for Bowie, teaching him how to structure songs, write top melodies, set up riffs, spin lyrical scenarios. You see it anywhere you look in Bowie’s Sixties work, from how the lovelorn “Baby Loves That Way” answers the Kinks’ “Nothing In This World” to how “See My Friends” haunts “The London Boys,” from the Davies-esque third-person character pieces of Bowie’s debut LP to the melodic and harmonic flavors from Kinks songs that turn up in later Bowie pieces (e.g., Iggy Pop’s “Baby,” which Bowie co-wrote, has bits of “Dead End Street” and “Sunny Afternoon” in it).

Yet covering “Waterloo Sunset” was still rather ambitious for Bowie: it would be like attempting to finally crack “A Day In the Life” in late middle age. “Waterloo Sunset” was a Kinks masterpiece, a capstone for an era. “I started writing a song about Liverpool that implied that the era of Merseybeat was coming to an end, but I changed it to ‘Waterloo Sunset’ not only because that gave me a bigger canvas to work on but because it was about London, the place where I had actually grown up,” Davies wrote in his “autobiography” X-Ray.

He’d felt possessive of the song as he wrote it, refusing to let his bandmates hear his lyric until backing tracks and backing vocals were cut.** “Even when the record was finished, it felt like a secret,” Davies wrote. “It was like an extract of a diary nobody was allowed to read.” When asked by a critic what the next Kinks single was, Davies pretended to have forgotten the song’s title. 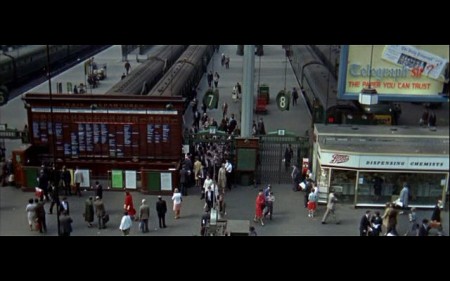 It came from a teenage memory: Davies standing on Waterloo Bridge, watching the brown Thames flow beneath him, having a vision of the river cresting its banks and submerging the Houses of Parliament.*** Many of his great Sixties songs share the sense that an older, homelier England is getting washed away by a fresh tide, leaving the “common” British man or woman stranded and wondering how to get home (if home’s even still there). While often using his large, ructious family as characters (Rosy, or his brother Dave as his swinging sister), Davies used for his lead actors in “Waterloo Sunset” the actors Terence Stamp and Julie Christie, beautiful gods of Swinging London (if there was a Wicked + Divine set in Sixties London, they’d be in the pantheon for sure). He cast himself as narrator, a shut-in who spends his days in his flat, watching life go by, turning the nameless people he sees into stories.

So “Waterloo Sunset” is a songwriter’s workbook. The composer sits at home alone, watching the young go about the business of life as he scratches out ideas in his notebook. There’s too much relentless life out there: the dirty river, flowing ever eastward to the sea (counterpoint to the lazy old sun, ever ballooning westward). The millions of people entering Waterloo Station, pooling from all across London and streaming in veins outward to the suburbs. Waterloo Bridge itself (the opening and closing scene of Alfie), its name Britain’s fading glory, now a commuter’s walkway and a meeting place for lovers, a still point for old dreamers.

Davies was often depressed in the Sixties, worn down by band and managerial politics, struggling with financial problems (he was writing #1 hits yet was often broke). He said he felt he was supposed to have given up years before. The Kinks were just meant to get a few top hits and break up, letting the record company move on to brighter things. But he kept at it. In 1967 he was still writing songs in the shadow of the favored likes of the Beatles. The Beatles promised the world could be new; Davies stayed home to keep a record of what was being decommissioned: steam trains, china shops, Victoriana, palais halls, dance bands. Must you keep flowing? As long as you have one corner of London to claim, you’re not dead yet. Sunset’s the end of the day, but it lingers for a while in the summer.

The Kinks’ recording of “Waterloo Sunset” was marked by happenstance and their typically erratic studio habits. After puzzling how to process Dave Davies’ lead guitar, they wound up piping it through tape delay (“almost like a Fifties-type ‘triplet’ delay,” Dave recalled) while Ray’s rhythm guitar was a scrappy undercurrent in the mix, barely audible at times. The song’s beautiful melancholia was in the backing vocals–the Davies brothers and the essential Rasa Davies, the grace of many Sixties’ Kinks tracks—which soar upward while the chromatic bassline trudges downward.

Having sung “Waterloo Sunset” as a joyous full-band piece at the Tibetan concert, with Bowie serving as the high end of the harmonies, Bowie crafted a bright, even peppy version of the song in the studio. Why he felt the need to chase away the blues of the song, to make essentially a “Waterloo Sunrise,” is another question. There was something of a precedent: a Kinks TV version from 1973 with horns and a host of singers, where the refrains were a carnival retort to Davies’ humble verses.

But Bowie mainly just scrubbed away the soot, his embellishments including a nagging two-note synthesizer riff, a handclap-fattened Sterling Campbell hitting on every beat in the intro, and a “theremin” squiggle to transition back to verses. The song hustled, sparkled; it pushed you along. Bowie discarded most of the Kinks’ harmonies, only doubling himself at the octave in refrains (one of his voices was almost conversational). He wrote a new set of backing vocals for the last verse, some “ooh-LA-las” in slight debt to the Beatles’ “You Won’t See Me.” Only in the coda did he finally bring in the echoing, plangent harmonies of the original. He sounded as if he was in competition with himself.

The Kinks’ “Waterloo Sunset” offered that in a world consumed with movement, often going nowhere, sometimes you could find an escape hole, like Terry and Julie do (were they catching a train out of town?) Bowie’s version has no need for hideaways. It’s the sound of a winner’s Sixties, a flattened Sixties; it seems intended as cheery in-flight music for Virgin Airlines. 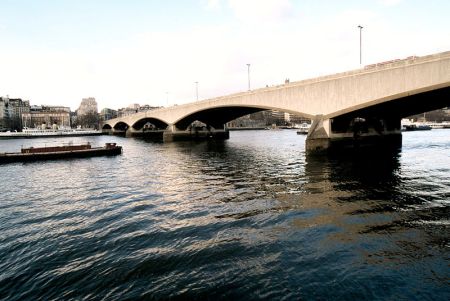 Bowie and Davies’ performance was at Carnegie Hall, 28 February 2003. Bowie’s version was recorded ca. January-April 2003, Looking Glass Studios, NYC. Released 10 November 2003 as a “cyber-single” download in the UK (some BowieNet members got the track earlier on a promo CD), and also included on the “tour” edition of Reality, which included a DVD with the entire album sequence played live at Riverside Studios in Sept. 2003.

* Bowie also played Kinks hits on stage with the likes of the Manish Boys and the Lower Third in the mid-Sixties, and he’s thrown in bits of “All Day and All of the Night” in a few live performances over the years.

** Likely some poetic license here on Davies’ part (X-Ray is far from an “official” autobiography), as his brother recalled Ray playing the developing “Waterloo Sunset” to him and “we started ad-libbing vocal parts around the chorus.”

*** Davies described the Thames as “bright brown, almost red…like blood flowing through a great vein,” which does suggest another lament for a “lost” England, Enoch Powell’s “rivers of blood” speech from 1968.

People Have the Power/ Get Up Stand Up

Among the most sublime live performances Bowie gave in the early 2000s were at a trio of concerts for the Tibet House Benefit. Held annually at the end of the long New York winter at Carnegie Hall, the benefit shows have had the likes of Lou Reed, Philip Glass, Iggy Pop, Patti Smith and Bowie as performers and arrangers.

Bowie’s three consecutive appearances (2001-2003) produced the most striking arrangements of his later performing years. “Silly Boy Blue,” sung with the Tibetan monk chorus that he’d always envisioned for the song, was a marvel, one of the song’s finest performances, while the Scorchio Quartet-dominated version of “Heroes” is one of that warhorse’s more haunting interpretations.

In 2002, Bowie sang the as-yet-unreleased “I Would Be Your Slave” with the Scorchios and Tony Visconti on bass, then offered a colossal “Space Oddity” driven by the combined Scorchio and Kronos quartets, Philip Glass on piano and the late Adam Yauch on bass (if one’s to make any criticism, it’s that Sterling Campbell’s drums are a bit leaden).

And for his last (to date) performance at the Tibet House benefit, Bowie played “Loving the Alien” for the first time since the Glass Spider tour, with just Gerry Leonard for accompaniment, and Bowie wending back into the song as if trying to catch sight of its first inspiration. “Heathen” was the now-standard gorgeous interpretation with the Scorchio Quartet. He also sang a duet with Ray Davies (see next entry).

At the end of each show, Bowie showed up at the close for the group sing-a-long. These tended to be somewhat ragged affairs, with a happy touch of Christmas pantomime to them. Twice Patti Smith took the lead with her “People Have the Power,” while in the 2003 show, the finale was a group-sung version of Bob Marley and Peter Tosh’s “Get Up Stand Up,” the great third-world anthem whose righteous anger seems more justified with every passing year.

If Bowie ever does return to live performance, I wouldn’t be shocked if it starts at Carnegie Hall one winter.