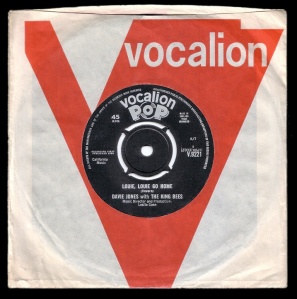 Any aspiring British rock band tried to nab the latest American record and cut its version first, and somehow a grubby bunch of amateurs like Davie Jones and the King Bees got a brand-new track by Paul Revere and the Raiders and beat all rivals to the studio. They could do this mainly because Paul Revere and the Raiders, in spring 1964, might as well have been a fictional band in the UK–they were a regional American band with no UK chart hits. So who knows how Bowie & Co. came across this song: perhaps their producer Leslie Conn, who had ties to Dick James (the Beatles’ song publisher) had suggested it.

“Louie Go Home” was the Raiders’ sequel to “Louie Louie.” The Raiders had battled with the Kingsmen throughout 1963 as to whose cover of “Louie, Louie” would chart higher, until Mitch Miller at Columbia killed promotion on the Raiders’ single after the Kingsmen finally started charting nationally. The Raiders’ “Louie Go Home” is a murky New Orleans R&B stew-the track is built on the piano, the left-hand riff doubled by saxophone and bass, all overlaid by a churning, clanking layer of percussion.

The Raiders were a stage band, so “Louie Go Home” is a series of shticks to rev up an audience–a breakdown, a call-and-response vocal, some “little bit softer now, little bit louder now” audience bait. Bowie and the King Bees dutifully try to imitate it all, but the result is thin gruel: lacking a piano, the King Bees have to weigh the riff entirely on the bass while the guitars hit on the off-beat; the drummer does his best to kill the groove, thwacking away as if determined to frustrate prospective dancers.

If “Liza Jane” took the Stones as a cue, it’s b-side is more Beatles–the vocal harmonies in the bridge are close to those in the Beatles’ version of “Money” (at 1:10, it sounds as if they’re about to sing “that’s…what I want”) while Bowie seems to be imitating John Lennon singing “Twist and Shout.”

Originally penciled in as the A-side but wisely switched, as it lacks the punch of “Liza Jane.” Earnest, clumsy, not too terrible.

So it all begins here.

David Bowie, in New Jersey in June 2004, sang the first verse and chorus of his debut single “Liza Jane” to honor its fortieth anniversary and prefaced it by calling the song “absolutely dreadful” and “excruciating,” which isn’t a bad description of the sludgy blues fragment he offered that night.

The original single, though, is pretty hot, especially given it’s the work of “five white boys from Kent singing about wayward women and freight trains,” led by a 17-year-old kid who bit his lip on stage whenever anyone cheered, and whose first gig had been a wedding anniversary at which the band played two songs and bombed (Christopher Sandford).

Bowie and some of his critics/biographers often retcon his life so that the ’60s are seen now as one long prologue, to the point where Bowie seems to just wink into being as the decade ended, as though sensing his time had come at last. This obscures the fact that Bowie was a working journeyman professional musician for much of the ’60s: “Liza Jane,” released in June 1964, predates “You Really Got Me” and “It’s All Over Now” and is contemporaneous with “A Hard Day’s Night” and “House of the Rising Sun.”

“Liza Jane” is doubly derivative (aping the Stones aping American electric blues) but it’s no matter: the bassline is thick and supple enough to balance out the stiff beat, a sax riff and guitar fills plug up the gaps, there’s your standard garage band 12-bar guitar solo (by Roger Bluck) and Bowie (still called Davie Jones here) varies from a yelp to a growl. The song mainly exists so everyone can sing “Ohhhhh-Little-LI-za!!” as salaciously as possible. Cheap (the disc seems to have been mastered loud enough to reach the border of distortion), thumping teenage music–there’ve been greater debuts, but there’ve been far more worse.

“Liza Jane” and its b-side were cut over seven hours in a West Hampstead studio, and it was “composed” by Leslie Conn, the producer, though it’s basically the band’s variation on the American standard “Lil’ Liza Jane” (Conn later called the standard a “Negro spiritual” though “Lil’ Liza Jane” is a pure pop mongrel, its ancestors a jumble ranging from Stephen Foster (whose “Camptown Ladies” has a similar melody) to the mysterious Countess Ada de Lachau, an impoverished aristocrat credited as the song’s composer on the 1916 sheet music). As much a country song as it was a blues, it’s likely some recent R&B versions were the band’s primary inspirations, like Huey Piano Smith’s “Little Liza Jane” (1956).