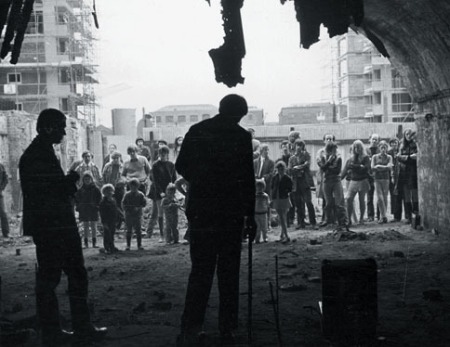 After he and Hermione Farthingale broke up, Bowie reduced Feathers, their former folk trio with John Hutchinson, to a duo, writing songs with two-part harmonies. He and Hutch became a Simon-and-Garfunkel double act: Hutch singing low and playing the straight man; Bowie offering a new character—a chatty, fey persona able to crack up the audience between numbers.

Among Feathers’ concert repertoire at the time (February-April 1969) were Bowie compositions like “When I’m Five,” “Space Oddity,” “Sell Me a Coat” and “Ching-a-Ling,” along with a number of covers, including Jacques Brel’s “Amsterdam” and “Au Suivant,”* Leonard Cohen’s “Lady Midnight” (likely a Hutch suggestion, as he was up on Canadian folk) and even Victor Young’s standard “A Hundred Years From Today.”

When Hutchinson and Bowie made their demo tape (which eventually sold Bowie to Philips/Mercury) in April, they mainly concentrated on newer Bowie compositions like “Janine” that would later wind up on Space Oddity. There were a few covers done for the session, however, suggesting that Bowie was considering them for possible inclusion (Bowie would soon make it a habit of having at least one cover per LP). They were:

“Love Song” was written by Lesley Duncan and later covered by Elton John on his 1970 Tumbleweed Connection. Duncan had a similar trajectory to Bowie—she cut a string of failed singles throughout the ’60s until finally breaking through at decade’s end (when John covered “Love Song”). Hutchinson has the lead vocal.

And “Life Is a Circus” was by the obscure folk group Djinn (so obscure that they’re often listed in Bowie references as an “American folk group,” though they were Brits, led by the late Roger Bunn, a sort of ‘fifth business’ character in early ’70s London).

Having a wife and child to support, Hutchinson soon realized he couldn’t survive playing the occasional meagerly-attended folk gig. So he left Bowie and went to work as a draughtsman. It wouldn’t be the end of Bowie’s association with Hutch, one of the more sympathetic figures in Bowie’s life, however, as he would later return at the end of the Spiders from Mars era.

Both are available on bootlegs like The Beckenham Oddity.

* Both covered by Scott Walker, the latter as “Next.”