On the morning of 16 January 1985, during a snowstorm that had left the Cane Hill Hospital in Coulsdon understaffed, a patient left the asylum grounds. He went across the road, into the Coulsdon South train station, and walked to the end of the platform. When the express train, which had run late, appeared in the distance, he jumped down onto the track. He lay his head upon the rail and turned his face away from the train, which killed him a few seconds later. He was Terry Burns, David Bowie’s half-brother.

As with many suicides, the final act wasn’t a surprise. Burns had laid on the same track the month before but had pulled away from the rail at the last minute. He had thrown himself out of a window in Cane Hill in 1982. These are just the documented attempts.

Most of us are fortunate in that our family tragedies don’t become the sport of tabloids. The Sun attacked Bowie for his alleged mistreatment of Burns, calling him out for ignoring his brother and for not attending the funeral (which he didn’t attend because he thought he would make it a press circus). The papers gave a platform to an aggrieved aunt to lambaste him. The following year Peter and Leni Gillman’s biography, Alias David Bowie, was published, with the aunt as one of its key sources and which offered as a central premise that the Bowie family was riddled with insanity and that Bowie’s tortured relationship with his mentally ill half-brother, and his fear of going mad, inspired many of his songs. Except for a note included with the flowers he sent to Burns’ funeral (paraphrasing a line from Blade Runner), Bowie kept silent.

Certainly Terry Burns had been essential to Bowie’s development; there’s little question as to that. Burns, Bowie’s elder by ten years, had helped turn David Jones into “David Bowie,” having introduced his younger half-brother to everything from Tibetan Buddhism to jazz. And the period in which Bowie and Burns had last had regular contact, the Haddon Hall days of 1970-1971 (when Burns would sometimes stay with the Bowies on weekends) coincided with Bowie’s quantum leap in songwriting—he would introduce himself to guests as “Terry’s brother” and then go off to write “Quicksand” and “Life on Mars?”

There was Cane Hill on the cover of The Man Who Sold The World, and there were the songs: “All the Madmen,” “After All,” “Five Years,“* “The Man Who Sold the World,” “The Bewlay Brothers.” Songs about doubles and brothers and shadows, about lost children, madness and isolation. But songs about “Terry” the imago, not Terry the troubled man who would take his own life at age 47. Bowie had made a doppelganger of Terry, had used it for his own ends, as a vessel into which he could channel his fears, a muse he could eventually discard. In 1993, promoting his new album, Bowie said he’d really never known his half-brother, who in his youth would disappear for years and then turn up at the house in Bromley seemingly just to upset his mother. “I think I unconsciously exaggerated his importance. I invented this hero-worship to discharge my guilt and failure, and to set myself free from my own hang-ups.”

“Jump They Say,” released eight years after Burns’ death, was “semi-based on my impression of my stepbrother,” Bowie told the NME. But “Jump” was no eulogy (how could it have been, as Bowie had already written “Bewlay Brothers”?), and there was little sentimental or maudlin about it. It was a somber, desolate song, built on a steady mid-tempo rhythm track and which only erupted into brief spasms of cold anger—even the usually buoyant Lester Bowie sounds aggrieved in his solo. Oddly enough, it was a hit: Bowie’s last-ever UK Top 10 single.

The starting point for “Jump” may have been Bowie toying with his old piece “What in the World” with which “Jump” shares a similar shifting two-chord structure, rhythmic base and even lyrical signifiers: a girl with grey eyes in “World” gives birth to the shaking man with a nation in his eyes in “Jump.”

And there’s a taste of Low‘s spiritual deadness in “Jump.” It’s even a far colder song than “What in the World,” which lies on the manic end of Low‘s emotional spectrum. “Jump” feels like it’s going nowhere, a song locked in a box, from the constant two-chord (C/B-flat) shift underlying the verses and bridges** to the looped percussion tracks (a left-mixed synthesized hi-hat and right-mixed tambourine 16ths, which play almost entirely through the track—the hi-hat drops out during Lester Bowie’s solo, while the tambourine gets down-mixed) to the bassline, which until the chorus just alternates between holding on the root note (the C bars) and playing a livelier two-note pattern (the Bb bars).

Bowie’s vocal, which keeps to the range of a fifth except for the soaring bridge, is also locked in this stasis, with Bowie arranging phrases so that “he has” falls at the same place, rhythmically, in each line (Bowie eventually alters this pattern—while he at first does the same with “they say,” using that line to end phrases in the first verse, he starts dragging it across bars in the second verse: “they/say he has/no fear they…“). This strict rhythmic pattern fits the coldness of the lyric, in which the “Terry” figure is observed as though by a scientist in a lab—“Terry” has no inner life, he’s just made up of a series of observation reports. Look at him climb! the researcher notes, with the slightest trace of life in his voice, watching as the man hauls himself up a spire like some sad parody of King Kong. And what’s the chorus but a crowd calling for him to jump? The researcher closes the file. I’d say he should watch his arse, he mutters, as he leaves the room and turns off the light.

Breaking through the song’s permafrost are a few brief interruptions—distorted, “underwater”-sounding trumpets that crop up in the intro and get a brief moment to solo; Lester’s wild spray of notes (in the Outside tour, this section was battled over by Reeves Gabrels and Mike Garson); Bowie’s pained-sounding saxophone responses to the crowd calling “jump!,” a melody that Bowie finally put to words in the last chorus. It’s a message of hope and faith (“got to BELIEVE somebody!“) though Bowie and his backing singers only emphasize the last syllable (“LEAVE!”) 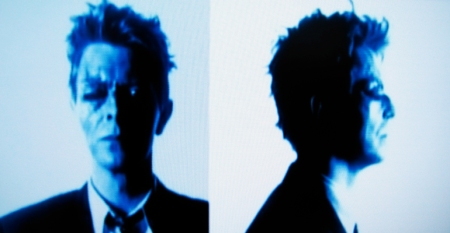 While the single went nowhere in America, “Jump” was a hit in the UK, its performance likely boosted by a strong promotional push, the hype around it being Bowie’s first “real” new single in half a decade and by its video, directed by Mark Romanek. The latter was Bowie’s best effort since “Ashes to Ashes,” with which it shared a sense of rummaging through discarded Bowie selves: in “Jump” the stewardesses from Kubrick’s 2001 share the stage with the fallen man of Lodger and the tortured Thomas Jerome Newton of Man Who Fell to Earth.

As for the man who walked into the Coulsdon South station that morning? No one knows him; no one will ever be privy to was in his mind, on that or on any other morning. He remains a secret to us, likely even to his brother. “Jump” doesn’t bring us any closer to him, it answers nothing, it explains nothing, it mourns him only in passing, indirectly, as if in a scientific paper’s abstract; the song’s falling man easily could have been someone Bowie had just read about in a newspaper. “Jump” lets us overhear a man talk to his brother’s shadow, which had always been just as much a reflection of himself.

Recorded ca. summer/fall 1992, Mountain Studios, Montreux and/or Power Station, NYC. Released as a single (Arista 74321 139424, c/w “Pallas Athena,” #9 UK) in March 1993. Performed live in 1995-1996, one of two songs from BTWN that Bowie revived. Again, there were a heap of remixes (see here for the lot). The UK 12″ single included the Hard Hands, Leftfield and Dub Oddity mixes (the latter, also by Leftfield, an instrumental that’s basically a new song, is on the 2-CD BTWN reissue); the Rock Mix (orig. on the Savage CD single, “Rock Mix” = more banal guitar) and the Brothers in Rhythm 12″ mix are also on that reissue. “Jump” was also released in 1994 as a poorly-received CD-ROM in which users could remix BTWN songs, re-edit the “Jump” video and listen to Bowie gas on.

* “I thought of my brother and wrote “Five Years,” Bowie, Rolling Stone interview, 1976.

** Much of the song alternates between B-flat and C major, the chords shifting every other bar. While the ear keeps trying to guess which way the song will go, the pattern seems that it’s never going to break, so there’s a suspension of movement, fitting the uncertainty of the track. Finally, the chorus progression (Dm7-F-Gm7-C5) offers a vague resolution, establishing the song in C Mixolydian mode. (Though you could make a case that the song’s been in F major the whole time, with the dueling Bb and C chords the IV and V chords of F. Or that it’s in standard C major, with Bowie borrowing Bb from the key of F major (as a substitute IV chord—it’s the sort of thing John Lennon loved to do), and portending a key change to F that never happens.)

Epilogue: There was another Bowie half-sibling, one who is often forgotten: his half-sister Annette, born in 1943 (she was his father Haywood’s daughter). Her story ends far happier. As Bowie wrote in the introduction to his wife’s autobiography: “When I was seven or thereabouts, my half-sister, Annette, left England for good. She had fallen in love with an Egyptian and was to travel to his village to marry him. She would write. My father may have received news but if so those letters were not shared. I never heard another thing from or about her…[when] Annette had arrived in Egypt, she had converted to Islam, which had meant undergoing a name change. Being the first Western Christian girl to ever visit let alone live in her husband’s village, the most appropriate name for her was obvious.

If you care to listen I will tell you that I, David Robert Jones, a Protestant Caucasian boy from South London in jolly old England, have a wife and a sister, both called Iman.”