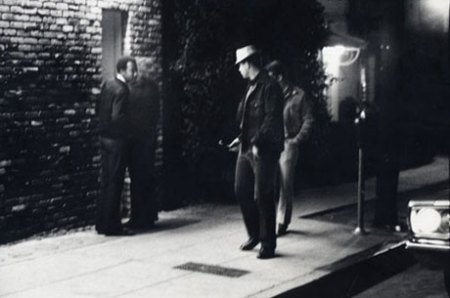 Bowie spent two weeks in Los Angeles in late October 1972. His manager Tony Defries said you had to spend like a star to become one, so the Bowie entourage, roadies and all, stayed at the 5-star Beverly Hills Hotel. Everything was charged to RCA. No one had enough cash to take a cab, so they charged limousines to room service. Afternoons by the pool, nights at Rodney’s English Disco on the Sunset Strip. To complete the LA experience, some of the Spiders took a course at the Scientology Celebrity Center (pianist Mike Garson was a Scientologist; he converted Woody Woodmansey by proselytizing on the tour bus). By the time they left LA, Bowie and company had burned through $100,000.

Sometime during his stay (allegedly after touring Hollywood Boulevard), Bowie wrote a song about an aging, debauched film star. The actor was once Hollywood’s golden boy, or so he claims, and now lives a twilight existence in Hollywood’s mortuary era, reveling in his fall. Life’s been clarified down to a series of coarse transactions, with the actor leveraging his fading fame, and depleting what’s left of his fortune, to poach young boys (and girls). These could be desperate, aspiring actors, or kids he’s hired off the street—it hardly matters so long as they’re on their knees. It’s one of the most brutal lines Bowie ever wrote: “Forget that I’m fifty, ’cause you just got paid.”

“Cracked Actor” is crude and louche, its lyric a collection of barely-double-entendre lines (“stiff on my legend,” “give me your head”). The chorus is hammered through with harsh, plosive sounds (“crack,” “smack,” “suck”—mirrored by Mick Ronson slamming on each beat), while Ronson smears guitar over every corner. The track’s centered on Ronson’s power chording and Bowie’s harmonica, the latter played through a cranked-up guitar amp and pushed high in the mix. While the song basically ends at 1:40, the guitar and harmonica extend the track for four more 12-bar choruses, starting a fifth as the track fades out, suggesting the Hollywood nightmare will keep repeating itself.

Recorded ca. 20-24 January 1973. For the 1974 Diamond Dogs tour, Bowie removed “Cracked Actor” from its back-room origins and staged it entirely within an actor’s fevered mind: he wore a cape and sunglasses and sang to a skull in his hand, a la Hamlet, then French-kissed the skull. He did the same, with even more artifice, during his 1983 tour. A curse on Los Angeles, “Cracked Actor” would rebound on Bowie: it became the title of a 1974 documentary chronicling Bowie living in LA at his lowest state, reduced to a jittery husk of a human being.