Chant of the Ever Circling Skeletal Family 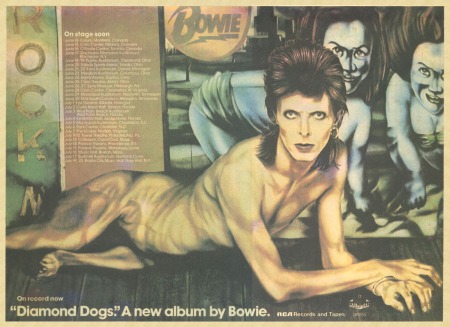 Brutish and short, “Chant of the Ever Circling Skeletal Family” was the only way Bowie could have ended something like Diamond Dogs. Segueing from “Big Brother,” the track could be Winston Smith’s complete, joyous submission to power, or it could just as well be the return of the Diamond Dogs, dancing around a bonfire on some skyscraper roof in Hunger City.

“Chant,” almost purely a rhythm track, is something of a rhythmic puzzle. Nicholas Pegg wrote that “Chant” is in alternating measures of 6/4 and 5/4, which doesn’t seem right. Rather “Chant” seems to begin with alternating bars of 2/4 and 3/4 and then, in the six “choruses” (1 chorus = 1 set of “brother,” “ooh ooh,” “shake it up” x2, “move it up” x2), it moves completely to 5/4 [edit: no, it doesn’t.]. Further accents–three beats on a tambourine every three measures, a cowbell coming in on the second chorus (hit either two or three times), what sounds like a guiro on the third—seem intended to muddle the sense of time.

[An earlier version of this entry said the track’s end repeat was a lock groove, which isn’t accurate: thus the perils on relying on 25-year-old memories. Still, I’ve retained the info on lock grooves, if that sort of thing interests you.]

The track, and the LP, end in a pseudo-lock groove, the first syllable of Bowie singing “brother” repeated in a stabbing loop of sound. The idea of a repeating lock groove on a record was an avant-garde experiment, its main innovator Pierre Schaeffer, a co-founder of the Groupe de Recherche de Musique Concrète. By the mid-’60s lock grooves had begun to appear on pop/rock LPs like the Beatles’ Sgt. Pepper and The Who Sell Out (the latter’s lock groove was an endlessly-repeating advertisement for Track Records). There the lock groove was often intended as a joke, meant to startle stoned people who were unwilling or unable to get up and change the record (Paul McCartney said the Beatles were inspired after many parties where everyone sat listening to the ticking of a record’s end groove for 20 minutes).

Recorded ca. January-February 1974. Performed during the Diamond Dogs tour of summer ’74 as well as the 1987 tour, in both cases as part of “Big Brother.” Essential cover: The Wedding Present, 1992.

Top: Try convincing your parents to let you go to this concert.