Beat of Your Drum 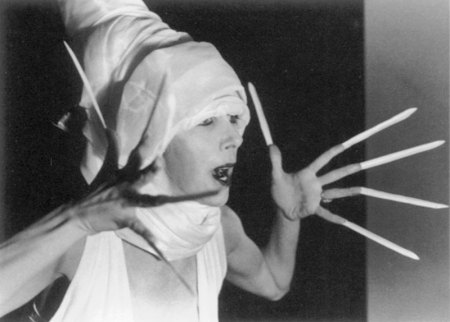 “Beat of Your Drum” uses the template of many Never Let Me Down songs: an ominous verse and a giddy chorus that seem to exist in different dimensions, with an awkward bridge/pre-chorus as adhesive to bind them together. But it just works better here, as the two incongruous elements in this case—sepulchral verses about desire, youth and ambition and a big dumb sex chorus that nicks a riff from Bruce Springsteen—complement each other, with the sordid mumblings of the verse exploding into the garish lust of the refrain.

The verses find Bowie in a nightclub, cast as an aging fashion photographer ogling a new model/conquest (Bowie’s sole description of the song was that “it’s a Lolita Number! Reflection on young girls…Christ, she’s only 14 years old, but jail’s worth it!“). Sounding inspired (perhaps he was familiar with the material), Bowie manages some of his best lines on the record, like “prison can’t hold all this greedy intention,” and for once he keeps a coherent theme going, with multiple references to film—negatives and colors fading—until he ends the second bridge with “bright light destroys me,” a play on ruining a developing photo as well as the idea of the singer as a vampire.*

Subtlety was never in the cards here: the track starts with a Morse Code synth pattern that’s drowned out two bars later by “clanging chimes of doom” synth percussion (likely all Erdal Kizilcay’s doing—he was primarily using a Yamaha DX7 with a Casio MIDI Controller for the sessions, though supplementing it with an Emax sampler). Then Bowie appears, keeping to his lower death-croon register, offering an odd, fragmented melody composed of short, three- or four-note phrases. He’s doing Scott Walker again but also seemingly parodying Peter Murphy at the same time, wrapping his influence and his influenced into a single gargoyle vocal. (Bowie liked the combination so much he soon used it again for Tin Machine’s “You Belong in Rock ‘n’ Roll.”)

Suddenly the Goth trappings fall away, as the chorus (midwifed by an all-over-the-place bridge which ends with Bowie barely holding on a high A (“TAAAME”)) is as bright and relentless as a Def Leppard refrain. The lyric’s beyond dumb, the refrain’s barely melodic (it’s just Bowie keeping mainly to one note until his closing run of fifth-dropping interjections: “I beat it! Can’t beat it! I feel it!“) and you realize soon enough that the chorus is going nowhere, just happy to stand there and applaud itself. But everyone’s so bloody eager to please: the horn/guitar riff stolen from “Glory Days,” the handclaps, the fairground saxophone, the keyboard with its nagging barrage of 8th notes. And after the second go-round of the chorus leads directly to a cheeseball Peter Frampton guitar solo, the only viable option is surrender. If only the whole album had been as tasteless as this.

Recorded ca. September-November 1986, Mountain Studios, Montreux and Power Station, NYC. On Never Let Me Down. Again, the LP edit is tighter, as it cuts a superfluous third chorus to get to Frampton’s guitar solo faster (starting at 3:13 on vinyl, 3:32 on CD) then trims another two choruses before the sax solo.

* Always thought the line from the Mekons’ “Club Mekon” (“Late one night the club was heaving/I saw a vampire move across the floor/old and white, with a silver cane/lusting for youth in the mirror”) was possibly a dig at Bowie, though Jagger or Rod Stewart seems a more accurate target.