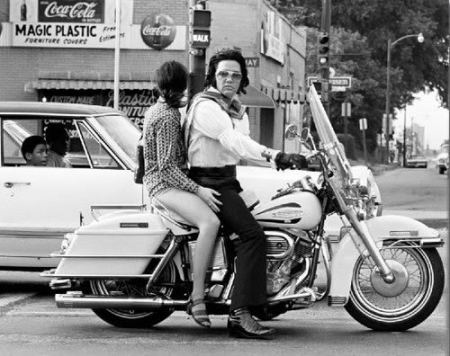 The 1950s of 1970s pop wasn’t quite right and had a strange ambivalence…The style and content [of Glam] was rooted in an idea of pop musicians being mutants from the future who were trying to blend in with us by assembling “authentic” versions of period clothing and getting it wrong. They had ’50s shoulder pads and Elvis-like lamé suits, but also eyeliner and lipstick…the lyrics touched on clichés of ’30s gangster movies and Humphrey Bogart alongside spaceships, motorbikes, aliens and jukeboxes.

“The Fifties” were invented around 1972-1973. American Graffiti (which gave life to Happy Days) and its UK counterpart That’ll Be the Day were on screen; Elvis, Chuck Berry and Ricky Nelson topped the charts; The Rocky Horror Show opened on the West End and Grease on Broadway. The actual 1950s, in all their shadow, were converted into an Eden: a sparkling, innocent contrast to the weariness, grime and open sexuality of the early ’70s.

It’s the first Bowie song to reflect the challenge of Roxy Music, whose first LP (and hit single “Virginia Plain”) had come out in the summer of ’72. The phased synthesizer lines owe something to Brian Eno’s squiggles and groans, while Bowie’s approach to the material—parodic, subversive, yet done entirely straight-faced—is similar to Bryan Ferry’s fractured takes on country-western (“If There Is Something”) and torch ballads (“Chance Meeting”).

Bowie wrote “Drive-In Saturday” during a train ride from Seattle to Phoenix in early November 1972. He was unable to sleep and, looking out the window at night while the train was somewhere in the desert, he saw a row of nearly 20 enormous silver domes off in the distance, moonlight dancing on their roofs. It intrigued him: what were they? Government post-nuclear-war prep facilities? Secret laboratories? (Most likely feed silos.)

As with “Oh! You Pretty Things,” Bowie’s SF narrative is a cover for a more basic human predicament—how kids, who typically have no idea about sex, have to improvise and fake their way through it, often using film stars and pop music as cues and instruction guides. The idea of groups of teenagers in cars, watching erotic films at a drive-in as though attending a church, is one of his sadder, more haunting images. Bowie also predicted that the Sixties would be enshrined, in the following decades, as the unsurpassed height of glamor and sexual freedom, and so used to belittle the kids who would grow up in the Sixties’ shadow. As much as the past can be warped to serve the present’s needs, the past is also toxic. 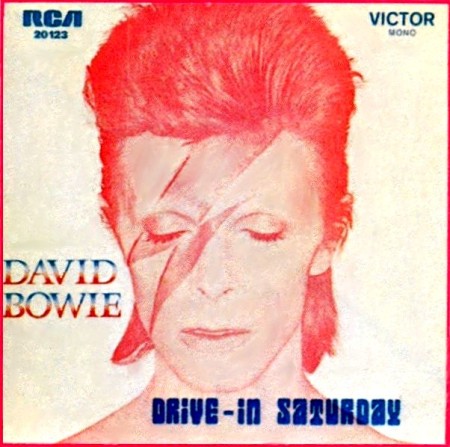 “Drive-In Saturday” opens with a pure period reconstruction: there’s a saxophone, swooning backing vocals, a basic chord structure in which the home key A steadily rises to the dominant (E), and it’s in 12/8 time (the standard meter for doo-wop, and used in other ’50s pastiches like The Beatles’ “Oh! Darling” and Madonna’s “True Blue”). The opening lines are a feint, too, offering timeless, banal romantic sentiments (“don’t forget to turn on the light/don’t laugh babe, it’ll be alright”).

Then things unsettle—a synthesizer splash in the verse’s seventh bar becomes a high, wailing note like an air-raid siren, while Bowie sings about “strange ones in the dome” and video-films. The second verse is entirely bizarre SF, with “Jung the foreman” gazing at the dried-up sea, worrying about fallout and guarding “the Bureau Supply for aging men” (Viagra?), The chorus, which changes key to G, is harmonically complex and time-shifting (so the two-bar “drive-in Sa-tur-day” alone is C/G-B/Am7/C-G/D-F#/D-E, with a move to 6/8 on “tur-day”).

The arrangement is typically intricate: take how the backing vocals often mirror Trevor Bolder’s bass (singing/playing three-note fills at the end of some verse bars, and making parallel downward steps in the long outro) or how Bowie’s vocal riffs off the saxophone, singing the same two-note pattern near the fadeout. The saxophone plays a sweet counter-melody to the vocal in the 4-bar bridges, while Mick Ronson’s guitar mainly serves as color: after his metronomic opening, he only rouses himself at the start of each chorus. It’s one of Bowie’s better vocals on Aladdin Sane, with Bowie first singing the title line softly, mainly keeping on one note, and then opening up in subsequent repeats, hitting a high G on “drive.”

Bowie introduced “Drive-In Saturday” days after he wrote it, playing it in several of his last ’72 American concerts. There are claims he debuted it in Phoenix, on 4 November, though the first surviving concert recording is from Bowie’s 17 November show at Pirate’s World, near Ft. Lauderdale, Fla. (Another recording, from Cleveland on 25 November, is on the 30th anniversary reissue of Aladdin Sane). He sang it alone on acoustic guitar, introducing it as “a song from the year 2033.” There are conflicting stories about whether he offered “Drive-In Saturday” to Mott the Hoople, with some claiming that Bowie soon rescinded the offer, others that Ian Hunter rejected it.

Recorded in New York on 9 December 1972, and issued as Aladdin Sane‘s second single (RCA 2352, c/w “Round and Round’). While it was one of Bowie’s highest-charting UK hits (#3), “Drive-In Saturday” was rejected as a single by RCA’s US division (which weirdly chose to issue “Time” instead). So “Drive-In Saturday” became something of a lost single for Bowie,  not included on any greatest-hits compilation until the ’90s. A shame, as it’s one of the finer songs he wrote in the period.