The Gift of Sound + Vision

The first box sets that I bought, when I was 17 years old, were Product, a Buzzcocks collection by Restless Retro, and Rykodisc’s Sound + Vision. I got them in the autumn of 1989, and on cassette—not an ideal medium for a box set—because I didn’t own a CD player then.

Sound + Vision, released 30 years ago today, remains the essential Bowie career compilation, despite said career being confined to a mere 11 years on it. Its recent challenger is Nothing Has Changed, whose span is far greater but whose “backwards” sequencing feels more gimmicky with each year. Also Nothing Has Changed, er, changed nothing in how Bowie was perceived—issued, like a set of bonus discs, in the midst of his grand comeback of the mid-2010s, it already seemed forgotten by the time of his death.

By contrast, Sound + Vision was intended as a major reputational reboot. Like Neil Young’s Decade and Bob Dylan’s Biograph (the latter an obvious, and admitted, influence on the Bowie set), it imposed a narrative upon a set of disparate tracks—outtakes, studio warhorses, live performances, demos. It built David Bowie a past, if one cluttered like a Victorian house, and plucked him out of the Eighties just as the decade expired. Sound + Vision (which closes in 1980) was a set of knight’s moves, sending him back across the board in leaps. (That said, S+V used Bowie’s “Serious Moonlight” 1983 tour setlists as one guide as to what to include—note how many of those songs appear on it.)

Jeff Rougvie, who put together the set for Ryko in 1988-1989, has gone into great detail on his blog as to how S+V came together (he has a book about Ryko coming out next year, too). The timing was ideal: much of Bowie’s RCA work was out of print, and had scarcely been available on CD before then, and most previous Bowie compilations had been obvious label cash-grabs. The success of Biograph, Clapton’s Crossroads and the Springsteen Live 1975-1985 sets had shown there was a market for high-end, ambitious rock retrospectives, and this was certainly one of them—a custom-made plastic silkscreen cover lid, a Kurt Loder-penned booklet, and a then-cutting-edge (and now unplayable) CDV bonus disc.

Rougvie is an American, Ryko was an American indie label, and Sound + Vision was an American take on a British artist. The track choices aren’t those of a fan who saw Bowie at the Hammersmith Odeon or “Starman” on Top of the Pops. They’re to fill in the rough sketch that the typical American fan had of Bowie’s career—S+V was an extended answer piece to the 1976 ChangesOneBowie, Bowie’s biggest US seller after Ziggy Stardust and the template of Classic Rock radio Bowie—“Space Oddity,” “Changes,” some Ziggy, “Jean Genie,” “Rebel Rebel,” “Young Americans,” “Fame,” “Golden Years,” done.

Another theme of Sound + Vision was: Look, Really, This Guy Used to Be Cool. The aim of its third disc, which spanned from Low to Scary Monsters, was to show America what it had missed by not buying those albums when they were released, Rougvie said. It also made a hipper, arty contrast to the waning Glass Spider, “Dancing in the Street,” and Jareth era. The inclusion of Bowie’s cover of Tom Verlaine’s “Kingdom Come,” an odd pick to represent Scary Monsters, was in part because Rougvie wanted to show Bowie’s ties to the New York punk scene, which was becoming mythologized by the end of the Eighties.

So let’s go back to high-school me, listening to S+V for the first time in 1989. Side One of the first tape starts with the “Mercury demo” of “Space Oddity.” The compilation begins at Bowie’s bedside as he’s strumming together the song that will introduce him to the world (Rougvie: “Bowie delivered [the “SO” demo] separately from the rest of the vault, although he left me to assembling the track list & sequence. He didn’t specify it as the first track, but later confirmed he’d hoped we’d start with it”). Then comes the B-side of “Space Oddity,” “Wild Eyed Boy From Freecloud”; the Marc Bolan “Prettiest Star” (a single unreleased in the US; American fans, if they knew the song at all, knew it as its Aladdin Sane remake), and the outtake “London Bye Ta-Ta,” lone representative of Bowie’s Deram-era Sixties (it was originally cut in 1968), with Bowie sounding like a pilled-up cabaret act.

In four tracks, you get Bowie’s deep past, if its sources are greatly in shadow: Anthony Newley, John Hutchinson, the Arts Lab, Chimi Rinpoche, Bolan, Lindsay Kemp. Then—bang—comes the Seventies: “Black Country Rock” (huh? is he covering Zeppelin?), “Man Who Sold the World” (why have I never heard this on the radio?) and “Bewlay Brothers” (wait, what?) And the side ends with “Changes.” (Rougvie: “I felt like the newbies needed familiarity after a lot of material the casual fan would only be peripherally familiar with, if at all. Plus, it’s fucking “Changes.”) 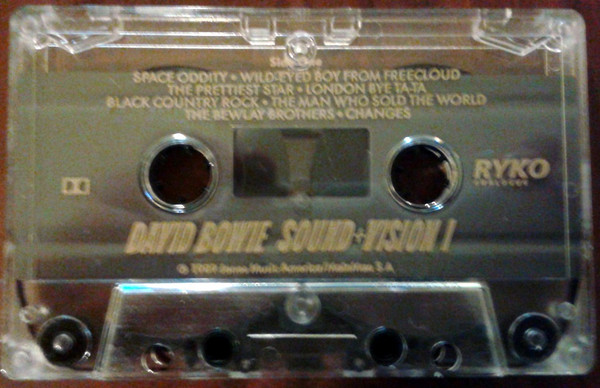 Finishing this side, I sat for a moment, then rewound to the start again. It was a few days until I got to Side Two, a history of Bowie’s glam years in jump cuts. Ziggy Stardust is represented solely by “Moonage Daydream” and the “Round & Round” outtake/B-side; Aladdin Sane via “Panic in Detroit” and “Drive-In Saturday” (another UK hit/ US relative obscurity). It ends with Ziggy dying on stage at the Hammersmith in 1973.

You can, of course, point out everything that’s missing—and there’s a lot! Where’s “Queen Bitch?” “Quicksand?” “Life on Mars?” “Lady Stardust?” But the object of the box set wasn’t to be a greatest hits compilation (that would come in 1990) and Ryko didn’t want fans to buy the same outtakes twice—thus much of the cream of the unreleased tracks (“Some Are,” “Who Can I Be Now?” “Sweet Head,” the “Quicksand” demo, “Alternative Candidate,” etc.) was held in reserve for individual album reissues.

The second disc/tape was the weakest of the set, having to carry the still-basically-Ziggy Bowie over to Thin White Duke DB in 15 tracks. The Pin Ups selections seem chosen by lot, the David Live ones don’t represent that tour well, although ending on “Wild Is the Wind” makes thematic sense as a “European” transition piece to the Berlin years. 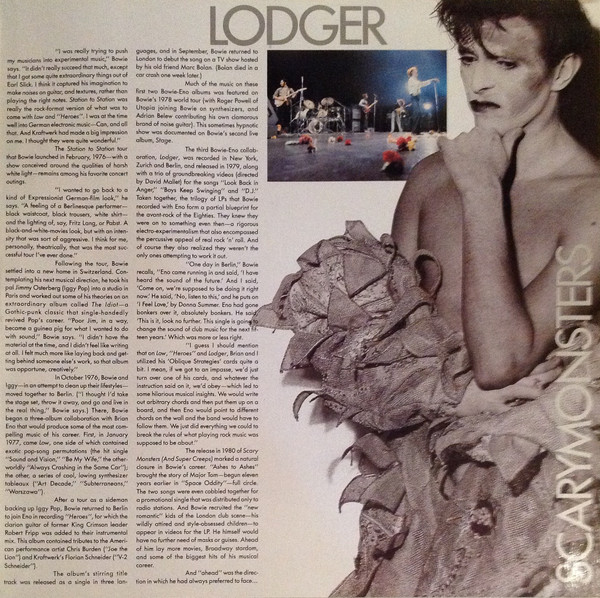 All compilations tell a story, if inadvertent ones; S+V‘s was deliberate. It gave order to decisions Bowie had made as whims, as instinctual bobs and weaves, of knowing when a style was played out and darting into another one; moves based upon little more than meeting a rhythm guitarist in New York, or dating an R&B singer, or agreeing to spend a summer making a movie in New Mexico. And by arranging these pieces in a (relatively) straight line, S+V brought out underlying patterns, the tics and oddities and continuities that Bowie brought to all his work, despite how much he felt the urge to move on, to discard his pasts. S+V showed him as the secret traditionalist he always was.

In 2003, EMI issued an “updated” four-disc S+V without Rougvie’s (or, apparently, much of Bowie’s) input. While some new selections were made in the spirit of the original—“Ricochet” is there to represent Let’s Dance—it was more hits-oriented. That said, it remains the only Bowie compilation to fully incorporate Tin Machine, including three tracks from Tin Machine II (and well-chosen picks at that—“Amlapura,” “Shopping for Girls” and “Goodbye Mr. Ed.”) For label reasons, it ends abruptly on Buddha of Suburbia, with an Earthling-era coda. 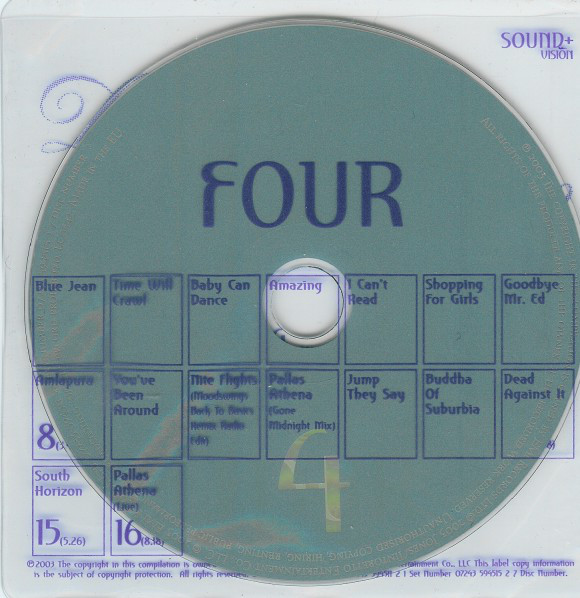 It had none of the impact of the original compilation (which had sold over 200,000 copies in under a year). Admittedly I wasn’t paying much attention to Bowie at this time, but I’ve no recollection that the updated S+V even existed—I found out about it years later. By 2003, no box set could’ve have rebooted David Bowie, a genial, regularly-touring, “regular guy” legacy rock act whose new songs weren’t heard on US radio. As it turned out, the way to refresh his public self would be to retire it for a decade.

Should the estate ever release Sound + Vision: The Remix, an eight-disc set that ends with the Blackstar outtake “Blaze,” what would it accomplish? The market is awash with Bowie retrospectives and the Bowie Story is canonical enough that there are children’s books about his life. Sound + Vision had made a workable past for David Bowie to use, and long ago it became part of it.

This entry was posted on Wednesday, September 25th, 2019 at 7:41 am and is filed under Victory and Savage Years: 1990-1993. You can follow any responses to this entry through the RSS 2.0 feed. You can skip to the end and leave a response. Pinging is currently not allowed.

15 Responses to The Gift of Sound + Vision