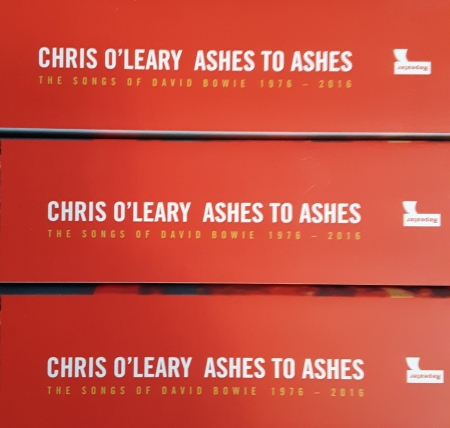 Hello, everyone. Ashes to Ashes comes out today (edit: not until the 19th in the UK, it seems? Sorry UK). You can buy it in your local bookshop (a good option!), you can buy it online, and you can get it as an e-book. See here for many ways to get it.

So this is my general thank you to everyone who visited this blog over the past ten (!) years, to those who have said something kind about it, and to those who’ve left an insightful comment. As you’ll see in the book’s introduction, I believe that the blog flourished in the early 2010s for a few reasons, the quality of its readership being a primary one. In a couple weeks I’ll talk about what I’m thinking of working on next.

If you can make it to an event in the next month (see here—but in brief summary, New York on 21 and 25 February, London on 14 March, and (details to come) Manchester on 16 March), please say hello. It will be nice to meet anyone whom I’ve only known as a name on a comment thread. 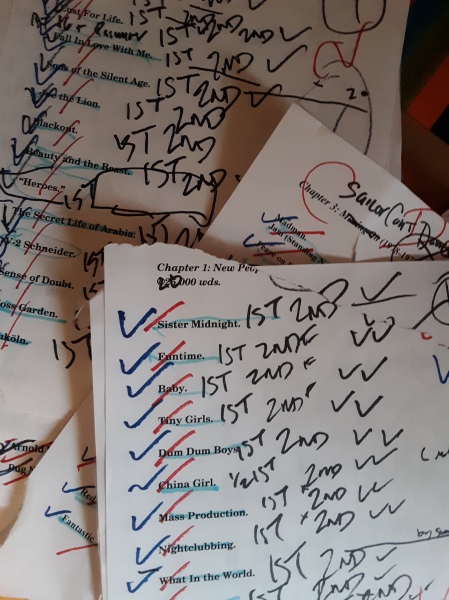 I’m putting up the book notes section in the next few days and will collect these in PDF form if that’s more convenient for readers. It’s to my great regret that these couldn’t appear in Ashes, but they would have added another hundred? pages to an already-oversized book (if you’ve ordered it in the mail, when the package shows up you’ll think it’s a pair of shoes) and jacked up the retail price, etc. But as dense and esoteric as these notes may be, they’re a vital piece of the book.

For one thing, I tried, as much as possible, to credit by name the journalists who interviewed Bowie and/or reviewed his concerts. I was blessed to write about a musician whose working life coincided with a far healthier environment for newspapers, music websites, and magazines. As late as the Reality tour, nearly every Bowie concert in North America and Europe was covered by a writer for a local or national newspaper, creating an invaluable pile of contemporary details. Someone in the 2030s writing about, say, Janelle Monáe may not have that to draw upon. The idea that YouTube clips, tweets and Tumblr entries documenting her Dirty Computer tour will be around in 20 years is…optimistic. 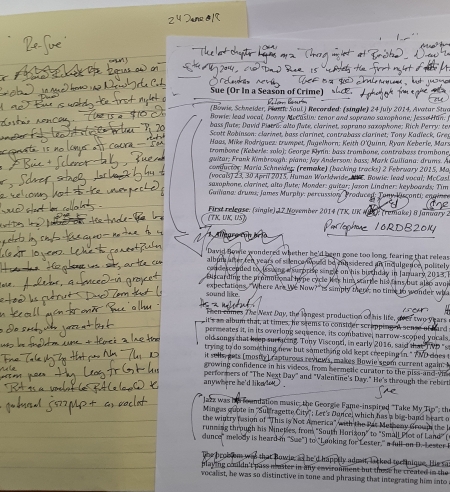 Some thoughts on how the book turned out:

Title comes from a Dziga Vertov subtitle that’s stuck with me over the years: that mix of optimism and doom. It’s the “character opening” chapter, so there are some quick intros for post-Station DB, Iggy Pop and Brian Eno. Some entries were greatly reworked; others hold fairly close to their original blog entries. Among the key pieces are “Sound and Vision” and “Warszawa.” As I’ve said before, the latter’s in great debt to Agata Pyzik, who gave—at last!—a Polish perspective for a song written about a Polish city.

The rocket-propulsed chapter—the upper of the period, with some Berlin stage-setting. “Heroes” got some substantial alterations; “V-2 Schneider” is far better than the blog, I think.

Mr. Toad provided the title. But a bear of a chapter to write, as it covers a sprawling period from the Marc Bolan and Bing Crosby duets through the 1978 tour to post-Lodger. It’s interesting to see how much Lodger‘s reputation has improved in the span between when I first wrote about it (2011) to today.

Title nods to a line from “Teenage Wildlife” (“I feel like a group of one”) but, perhaps less obviously, it’s from a 1997 article on Zora Neale Hurston. I nearly called it Except the Intellectuals, from a Renata Adler quote. I’d assumed the Scary Monsters chapter would be centered on “Ashes to Ashes,” which is a substantial bit for sure, but it turned out that “Teenage Wildlife” became its hub—even more central to the themes of ‘lateness’, modernity and anti-modernity, anger, etc. that permeate DB songs of this period (“Under Pressure” is part of this). With hope, the Baal songs work as an epilogue.

A financial title: if you’d bought shares in David Bowie in 1971 or thereabouts, 1983-1984 would have been your ideal time to cash out—you would have made a mint. World-popular Bowie, and its echoes. “Criminal World,” as blog readers know, had to bear the weight of an exploration of when a gay-identified pop star says he’s not gay anymore in 1983, aiming to be sympathetic to all sides—DB’s frustration with being defined by a homophobic media; fans who felt betrayed by his comments. Labyrinth gets a solid share of time and the chapter ends on some lighter notes.

My goal was to be not overly cruel about Bowie’s oft-bashed works: I made a pretty quick dash through what I consider the lesser half of the Never Let Me Down songs. The key pieces are “Glass Spider” and “Zeroes,” which aim to get at where Bowie was in 1987 and why, for some, his spells didn’t work this time.

A US Civil War reference—one of those grisly battles where men were stuck in the woods shooting at each other, then doing it again a week later. I’m indebted, as in a few subsequent chapters, to Reeves Gabrels, who broke down when songs were written and recorded for the Tin Machine albums. Again, my aim was not to bash a still-oft-bashed DB era but to show its serious strengths as well, to see what Bowie said he wanted to accomplish during his time in the ranks. That said, there are still a few jokes about the Machine, sorry guys.

A short but hard chapter to complete. I bet when the next box set comes out and a fresh round of retrospectives get done on Black Tie White Noise, some murkiness about this album will dissipate. At the moment it’s bit of a mess—some players weren’t credited, the thing came together over almost a year of sprawling sessions and Bowie’s insightful comments on the album were few. By contrast the Buddha of Suburbia pieces were a dream—did ’em all in a week or two, if I recall. “Untitled No. 1” remains a favorite in part because the original blog post was when Bowie came back in 2013—reading the old comments is like watching kids wake up on Christmas morning. A good memory.

Title’s from Henry Darger, as you’ll see. It meant lots of earth-moving—endless revisions, additions, cuts (“The Motel” was pared down hard, as I never thought that entry worked well)—but I think you’ll find this is one of the more thorough and, with hope, coherent narratives of how Bowie and Eno’s last collaboration began, what Leon was and what happened to it, in which order the songs came together (thanks again to Reeves—learning that the composition of “Thru These Architects’ Eyes” and “Voyeur of Utter Destruction” preceded the Leon improvisations shed light on why those, for me, had never seemed to fit ‘properly’ into the Outside frame). Spoiler: the killer of Baby Grace isn’t revealed.

Title’s from Robert Louis Stevenson (“there is one thing the imp cannot do—he cannot prolong life”). Writing the Earthling blog entries during 2013 was a slog: I was desperately trying to finish the Rebel Rebel manuscript and very burned out. In revisions, I cut entries down and focused some of this chapter on gear—Mark Plati’s samplers, Gabrels’ Parker and Roland VG, Zach Alford’s drum loops. And I wound up loving Earthling more, with its flash and scrapper’s sensibility—its sparkling conversation between six players—DB, Gabrels, Plati, Garson, Dorsey and Alford (in a way, this wouldn’t happen again until Blackstar). Book-ended by pieces on some of DB’s best tours. A subplot is that this is the last time DB truly irritated people, from Nine Inch Nails fans to a good chunk of the British press.

Title sounds like a Bond movie but according to DB, Abbie Hoffman told him this (there’s a play for someone to write.) Another monster to draft and organize, as it meant working through Bowie’s late Nineties detritus (BowieNet and Omikron and Bowie Bonds and BowieBanc, etc.), ‘hours…’ and Toy. With hope, it wound up on the side of coherence, spending a good amount of time on the long and winding creation of ‘hours…,’ an album that was made twice. Spiritual center is “Uncle Floyd,” an entry that upon revision, I realized was as much about my own losses as anyone’s. Not the only time, either: I put Nabokov’s Pale Fire in the bibliography as a joke on myself.

The title’s from a favorite poem in Jana Prikryl’s The After Party. The Heathen chapter is an ashen, po-faced, somber one, to honor one of Bowie’s more ashen, po-faced, somber albums. “Cactus” and the entry on the Legendary Stardust Cowboy hopefully provide some bright asides. I struggled with whether to keep my own part in the “America” entry (as on the blog), nearly deleting it at times, but everyone I showed the MS to said that it should stay, so it did. Still not sure.

Another woolly beast to wrangle. Reality is a tough one—it’s got a lot of songs and it’s all over the place at times (in retrospect, much like the album that followed it). Plus you’ve got to tackle all the bits and bobs of Bowie’s “semi-retirement” years. The “Bring Me the Disco King” entry is fairly intact (at the correct advice of a copy-editor, I wound up ditching the Neil Gaiman/Michael Moorcock parody section, as it didn’t fit with the other ‘alternate life’ bits). No doubt some unaware readers will say “what the hell?” at this point—Ashes gets progressively weirder as it goes on. Ending with the Scarlett Johansson songs, which I thought at first would come off as random, ended up okay, as they wrapped up the New York theme of the chapter.

Organizing the Next Day songs in more coherent form (thanks to Nicholas Pegg getting its recording dates for his latest edition) helped forge a decent storyline of the making of another long album, one full of struggle but also goofiness. “Heat,” by far the most laborious blog entry ever, writing-wise, is improved by edits, I believe. Curious how TND will hold up in the 2020s, as the “wow he’s back!” elated mood fades from collective memory—I’ve seen some bashing of it of late (for more, come to the event in Manchester).

And: the chapter you haven’t seen before (well, half of it). The title’s from Finnegans Wake, countered by a line from a Broadcast song, as you’ll see. At the least, having Maria Schneider guide you through the writing and recording of “Sue” should be of interest. I tried to give each musician stage time—“I Can’t Give Everything Away” is as much about Jason Lindner and Ben Monder as it is DB. I decided well over a year ago that the book would end with “Blackstar,” whose structure is meant to parallel “Station to Station” in Rebel (& I had the last line set far earlier, though wound up tweaking it in the last edits). Whether it all works is, of course, up to each of you.

This entry was posted on Tuesday, February 12th, 2019 at 8:35 am and is filed under Ashes to Ashes: Book. You can follow any responses to this entry through the RSS 2.0 feed. You can skip to the end and leave a response. Pinging is currently not allowed.

Leave a Reply to Sid the Cat Cancel reply