When I Met You 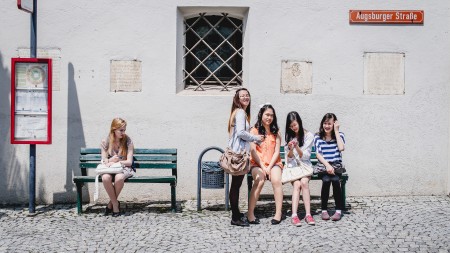 At the end of Lazarus, Thomas Jerome Newton discovers that the teenage girl he’s been talking to throughout the play is actually dead. “Not properly dead,” she notes. She’s the Baby Grace Blue of Lazarus—the girl whose murderer is never apprehended and whose death needs a ritual act to complete. Until then, she’s condemned to wander the earth (or at least Second Avenue) as a ghost. “I’m sorry, Mr. Newton, but it’s not me that’s going to help you get to the stars, but it’s you who’ll help me to die properly.”

“You’re my last hope,” Newton replies. “How can I kill that?” Cue the duet “When I Met You,” the play’s penultimate song.

Yet “When I Met You” isn’t sung by Newton (Michael C. Hall) and the Girl (Sophia Anne Caruso), as one might expect, given the narrative—its performers were misidentified as such when an audience recording from Lazarus was bootlegged. Instead it’s Newton and the “First Teenage Girl” (Krystina Alabado), one of a trio of singers/actors who serve as a Greek chorus of sorts (there are a wearying number of “Girls” in this play). When Bowie recorded the song during the Blackstar sessions, he took both parts.

“When I Met You” is a duet between a man and a voice in his broken mind—a dialogue on love, despair, and redemption by someone staring into a cracked mirror. On Bowie’s recording, the vocals are mixed to tumble, the lead voice gaining ground, the chorus vocals mounting a response. On the Lazarus cast recording, the space between Hall and Alabado’s voices is so great that each seems in a different world—their harmonizing is all top and bottom, with no middle.

A slow-paced composition that takes its time getting anywhere (the intro alone is 32 bars), “When I Met You” moves from Newton-sung verses to Newton/ Teenage Girl counterpoint/ harmony refrains to a harsh “bridge” section that’s the tension point of the song, where the home chord of G major is altered, diminished, augmented. It suggests the convulsions of Newton’s perspective, where nothing is solid anymore.

In ABBA’s “The Day Before You Came,” the singer’s waiting for someone, for something to happen, but we never learn who she’s waiting for, nor what they brought. Agnetha Fältskog crosses off the stations of her day—breakfast, train, work, lunch, train, Chinese food, TV, a Marilyn French novel before bed. She hasn’t been living as much as she’s been maintaining, and the romantic assumption is that she’s about to meet someone who opens up her life. Yet there are hints (in corners of the lyric, in the dark colors of Agnetha’s phrasing) that the “you” of the title is malignant: the murderer at the door, the tumor on the chart, the driver that doesn’t brake in time.

In “When I Met You,” the other has already come, has saved Newton in some way, and now the spell is wearing thin. “You knew just everything,” Newton begins. “And nothing at all.” (Bowie changed it to “but nothing at all” in his recording.) If Newton is Lazarus, the girl in his head has been Christ—she called him from the tomb, opened his eyes, let him speak. He was a zombie, a madman, someone lost in himself; she freed him from his trap.

In its way, it’s a long-delayed response to “Word on a Wing,” Bowie’s prayer for protection and deliverance in a dry season. “A scuzzier version of one of his grand ballads—imagine “Word on a Wing” with three-day growth and hangover,” as Alfred Soto wrote of “When I Met You.” A biographical reading is easy, perhaps too easy: Bowie thanking his wife for saving him, for Coco Schwab for protecting him (in the “Never Let Me Down” line), for his children for letting him escape being “Bowie” for a while, tethering him to earth. “When I met you…the edge had become/ the center of my world….I was off my head/ I was filled with truth/ it was not God’s truth.”

Yet whatever salvation he got from the muse/angel in his head, it’s fading away now. It’s all the same, rescued and rescuer sing to each other. The darkness has crept back, covering everything in sight. In Lazarus, Newton sings the final refrain as he prepares to stab the Girl, which he does as the last notes sound. Death’s release; no knowledge comes.

Of the Lazarus songs, “When I Met You” was the most difficult to transition into a solo Bowie recording. It had been a duet on stage, and was woven into the play’s narrative (as much as there was one). And when racked against its counterparts, it was the least of the new compositions.

Bowie tackled it during the first Blackstar sessions in January—he was starting out by doing remakes (“‘Tis a Pity She Was a Whore“) and getting down his takes on the Lazarus songs, as if to clear the ground for leaps to come. He took the scissors to “When I Met You,” cutting a line (“the dream of time”) and switching some chorus lines around in later refrains.

For the arrangement, he emailed Donny McCaslin that “the structure of ‘When I Met You’ is sound, but now we need to mess with it so we hear it from another angle. Put in a couple of passages in the corner (in darkness) and throw a small pen-light beam on the rest—like a P.I. scouting a motel room.” (“He’s never saying something like ‘can I have a bass drum on 2 & 4’?” McCaslin recalled. “It’s more these kind of images.“)

The result was what McCaslin, Tim Lefebvre, and other musicians heard as “hearkening back to older Bowie.” Bowie’s “When I Met You” lacks McCaslin’s saxophone, where in Lazarus Henry Hey had scored subtle brass lines for refrains. It runs on skitterings (Jason Lindner’s synthesizers in the intro and vocal breaks), pulses (a jaunty Lefebvre bassline) and jabs (an acoustic guitar (possibly Bowie?) strummed more scrappily than the player on the Lazarus recording), with the “Hawaiian”-sounding lead lines (McCaslin heard “an African highlife thing”) as a dreamy counterpoint to Bowie’s voice in the verses.

In the Lazarus duet, Alabado’s chorus vocal is sharp, insistent, holding on one note, spiking over Hall’s lower, moaning phrases—her final repeats of “when I met—when I met” sound like a distress call. Bowie’s backing vocals, placed further back in the mix, are both more playful and more dramatic—there’s a greater emotional spectrum to them.

And for his lead vocal, Hall, faced with lines like “the peck of a blackened eye,” “the streams of debris” and “now the luminous dark,” unfurls them, lets them roll off, stiffly at times. Bowie takes far more pleasure—there’s a grin in some of his lines, despite their occasionally despairing words. Among the last vocals that he recorded in his life, it shows that he always wrote parts with one actor in mind.

28 Responses to When I Met You