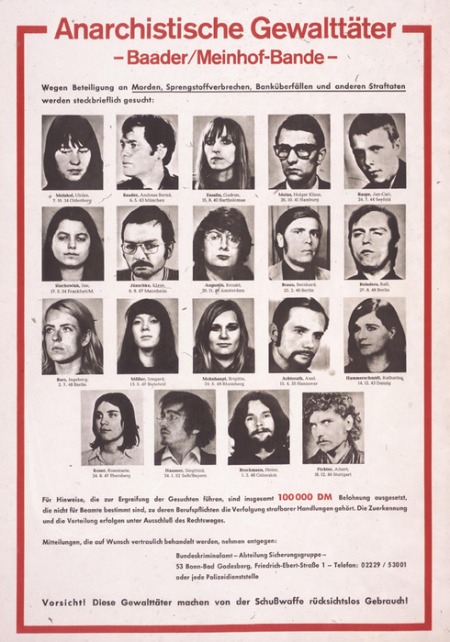 Here’s one that didn’t get many comments back when, and whose lyrical scenario seems more true to life today than it did in 1973, sadly. One of those songs whose simplicity, drive, power and wit kept it in the Bowie repertoire throughout his touring years.

In July 1972 Jerry Rubin and Abbie Hoffman came to Miami for the Democratic National Convention, and whenever they went out on the street, a mob of policemen followed them. Rubin and Hoffman expected nothing less: at the 1968 convention, the Chicago police had made a sport of clubbing and gassing protesters outside the convention hall. This time, however, there was a rumor that a camera crew funded by Warner Bros. would be making a film of the Yippies’ adventures, so the police mainly just wanted to get into the movies. Each one hoped to be the cop on screen bashing Abbie Hoffman’s head in with a club. There was no movie crew, so it was a peaceful convention.

The leading man of “Panic In Detroit” is a fading revolutionary/sex symbol whose last act is suicide, though he graciously leaves behind a last autograph. Inspired by Iggy Pop’s stories of the 1967 Detroit riots and the rise of the White Panther Party, the song’s last main ingredient was Bowie’s encounter at his Carnegie Hall show with a former classmate from Bromley Tech. This nondescript middle-class British kid had become a drug dealer operating out of South America; he’d flown his private plane to the show.

“Panic In Detroit” came as the New Left was devolving into celebrity personality-cult terrorism. The White Panthers’ John Sinclair (former jazz critic and the MC5’s former manager, commemorated by John Lennon on Some Time in New York City) and the late world-trotting revolutionary Che Guevara (whose Korda photograph, once an icon for radicals, now hangs in dorm rooms) were just the starting rounds. Now there was the Weather Underground, whose internal politics were those of a touring, squabbling rock group; Germany’s Baader-Meinhof Gang (Baader, who owned a Che poster, paid a designer to make his group’s machine-gun-and-star logo), and California’s Symbionese Liberation Army, whose kidnapping of the heiress Patty Hearst in 1974 was one of America’s most popular TV programs.(See Camper Van Beethoven’s “Tania”:“How I long for the days when you [Hearst] came to liberate us from boredom/From driving around from five to seven in the evening.”)

Political violence was a means of self-expression; revolutionary cells became performance artists, their various alliances with criminal groups a form of patronage. It was catnip for Bowie. In “Panic In Detroit,” he gave his provincial Che (late of the perfectly-named National People’s Gang) a backdrop of riot-torn streets and bloodless authority, the latter embodied by a cringing teacher and a student who runs to smash a slot machine in the chaos.

“Panic In Detroit” is also Bowie’s snapshot of the America that he encountered in depth for the first time, touring through it in late 1972: an America he spied through bus and limo windows and from hotel balconies: a country of empty spaces and fallen cities.

“There were snipers all over America, on tops of buildings,” he recalled in 1990. (There weren’t, really; Bowie was likely remembering Charles Whitman, who killed 14 people in 1966 during his sniper rampage from Austin’s University Tower, or even the “Scorpio” killer of Dirty Harry, who opens that film by picking off a woman swimming in a rooftop pool.) For Bowie, America had validated his imagination—the dystopic worlds he had been describing in song for years had turned out to be real places, filled with glamorous decay and casual murder. In Texas, Los Angeles and New York, he’d been harassed and even attacked by strangers. “It was really happening. Suddenly my songs didn’t look out of place,” he said. 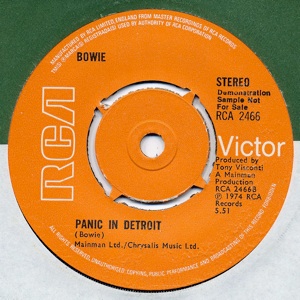 Opening with a power chord riff, its monstrous-sounding tone soon tracked with another Wah-Wahed guitar, Mick Ronson shadows Bowie with bombing runs down the scale that end with thick clots of E chordal figures. In the refrain he needles Bowie’s vocal with lines that expire in clouds of feedback. Given leave to solo in the bridge, he sneers.

Working on Ronson’s behalf are a rockabilly Trevor Bolder bassline and a mesh of percussion. Emboldened by his conversion to Scientology and bitter about his paltry wages, Woody Woodmansey refused to play a Bo Diddley-esque shuffle Ronson and Bowie had requested, saying it was corny. Instead he played 16ths on his medium toms and punctuated chorus phrases with his crash cymbal (phased, like the backing vocals). So Bowie brought in his friend Geoff MacCormack to play congas and maracas to cook up a Diddley-style “swamp” groove. The track’s central pulse is MacCormack’s moves between high and low congas, occasionally muting the high conga for effect, as on the title phrase. Gliding between B minor and D major, “Panic In Detroit” descends into the maelstrom for its minute-plus coda, with Ronson’s pick scratches, Woodmansey’s crashes, MacCormack’s congas and the wails of Juanita Franklin and Linda Lewis sounding like a collective murder.

Mostly composed in Detroit during the Spiders’ first visit there (8 October 1972), “Panic In Detroit” was completed on 24 January 1973. A rarity in the last Ziggy Stardust shows, it was a regular in the 1974 tour (a live Philadelphia recording was the B-side of “Knock on Wood”) and in many later tours: Bowie played it up until the end. He also remade the song with Tony Visconti, Zaine Griff and Andy Duncan in 1979 for Kenny Everett’s New Year’s Eve show, but another remake (of “Space Oddity”) took its place in the show —this revised “Panic in Detroit” (with a cameo by either a Speak n Spell or an imitation of one) later appeared on reissues of Scary Monsters and Heathen.

This entry was posted on Wednesday, March 23rd, 2016 at 4:27 pm and is filed under Aladdin Sane: 1973. You can follow any responses to this entry through the RSS 2.0 feed. Both comments and pings are currently closed.

37 Responses to Reissues: Panic In Detroit