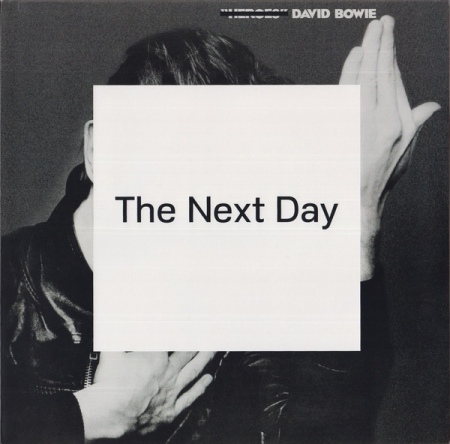 “I thought that some fan made a joke cover,” Tony Visconti recalled his reaction upon first seeing Jonathan Barnbrook’s The Next Day image. He wasn’t alone.

Commissioned by Bowie in September 2012, Barnbrook proposed that the Next Day cover image should be the defaced cover of an earlier Bowie album. “I thought it would be quite a shocking thing to do and also play with this idea of image,” he told the journalist Rob Meyers. He experimented on nearly every Bowie LP cover, with Aladdin Sane a promising candidate. But “subverting [Aladdin] didn’t work because it’s subversive already…if you subvert Aladdin Sane, you’re adding to it, not destroying it.”

In Sukita’s “Heroes” cover photograph, by contrast, “there’s a distance.” The photo is highly stylized (Bowie replicating a hand gesture from a favorite Egon Schiele painting) and completely contained: it’s Bowie as a god in a universe of one.

Barnbrook first scrawled over the “Heroes” photograph and titles: it looked like a bitter ex-fan had wielded a magic marker (it was the scabrous recycled look of some Fall and Pavement album covers). It didn’t quite work. Then he struck upon having a white square obscure much of the photo. “It had to be something that was in direct contrast to the image underneath but that wasn’t too contrived (we know all design is contrived, that is the essence of the word ‘design’),” Barnbrook wrote in a blog entry in January 2013. “It would have been clearer to many people if we had scribbled all over the cover but that didn’t have the detachment of intent necessary to express the melancholy of the songs on the album.”

Although the album hadn’t been titled when Barnbrook started his work (the code name for the design project was “Table”), The Next Day and the defaced “Heroes” image worked in tandem. “We can be heroes—just for one day,” Bowie had sung. Now his beautiful alien 1977 visage is covered by what looks like a Post-it note. Because it’s the next day, the day after being heroes, back to her being mean and him drinking all the time.

It’s also Bowie’s first album cover not to show his “current” image.* At some point, out of boredom or necessity, the likes of Dylan and Paul McCartney and Neil Young have issued albums whose covers were a painting or a photograph of something other than the aging artist. Not Bowie: his albums are a sequence of magazine covers, his “current” look as important as his current sound. (And recall that “Heroes” had extra impact because it was the first commissioned Bowie cover photo since Young Americans.) The Next Day offers messy shorthand. Bowie isn’t quite “back”: no interviews, no tours, no new cover picture. And rather than claiming he’s offering any new sound, he’s openly scribbling and pasting over his old work.

* Exceptions include Tin Machine II and the original Buddha of Suburbia. 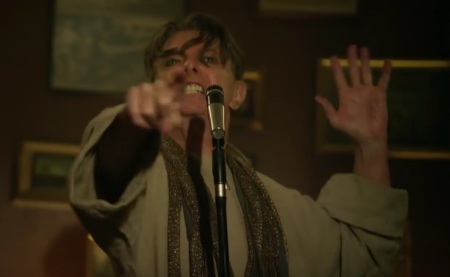 A corrupt priest goes to his favorite bar, populated some possibly depraved Catholic icons, and dances with a woman working there. The music is courtesy of a prophet who’s apparently been out in the desert for a while. The woman develops stigmata, blood sprays everywhere, the prophet’s attacked by false priests and harlots until the deus ex machina ending, complete with heaven-sent white light and the prophet being raptured away.

The reaction was to be expected. The Catholic League’s Bill Donohue attacked Bowie, though more for aesthetic incoherence than blasphemy (“it’s a sure bet [Bowie] can’t stop thinking about the Cadillac of all religions, namely Roman Catholicism. There is hope for him yet,” he concluded). A former Archbishop of Canterbury said Bowie didn’t have the guts to make a video that played with Islamic imagery. YouTube briefly deleted the video (though apparently in error, not in response to complaints), which made fans excited for a moment that Bowie was “dangerous” again. A few tabloids got to run some two-page spreads with blood and half-dressed women, which they always like doing.

It does all seem a bit tired: épater le bourgeois catholique is a very Eighties thing, and Madonna had gotten there first. What saves Floria Sigismondi’s video is its cracked sense of humor, its taste for the grotesque and Sigismondi’s eye for a shot: the way Gary Oldman’s priest, with his ducktail haircut, looks like an aged greaser; the way Marion Cotillard seems to be willing herself out of the frame though abstracted bliss.

“‘The Next Day’ is a song about a tyrant, let me leave it at that,” Visconti said in an interview, while in another he described the tyrant as a medieval Englishman [or “Catholic cardinal”] who “was very insignificant. I didn’t even know who Bowie was talking about. But if you read the lyrics, it’s quite a horrific story.”

A weary sense of obligation led me to spend a couple days trying to track down which “English tyrant” Bowie had read about, but searches for tyrants who were stuffed in hollow trees, or who cavorted with whores, or who were chased through alleys, turned up nothing in particular. Anyway Bowie’s character is far more a general idea of some grasping second-tier Shakespearean villain, a rabble-rousing priest who winds up being killed by his rabble. The video plays with this: all of its medieval Catholic imagery (Joan of Arc is at the bar, as is the eyeless St. Lucy, though the flagellant barback is more a Dan Brown nod than anything else).

It’s all a bit of theater, but the main joke is about Bowie. The sequence of Next Day videos is a storyline. “Where Are We Now” is the returned ‘Bowie’ as a mummified museum exhibit, supervised by the “real” Bowie who keeps off stage. “The Stars Are Out Tonight” is Bowie playing himself as a senior citizen. And “The Next Day” is his big, vulgar Cinescope resurrection, with Bowie howling, jumping around, cursing, performing ‘live’ again. “The normalisation,” as the blogger How Upsetting described it. “Bowie performs. He hams it up. The curtain is pulled back. The deity figure is snuffed out at the end.”

The doctors tell me I shouldn’t be here now. But I don’t go to the doctors for chemotherapy or anything anymore. I just put one foot in front of the other, and the next day is the next day, and you do your best. I’ve still got so much to do.

You can talk about the drums: Zachary Alford harping on the beat, brooking no distractions, sparing little time for fills, pacing everyone with his hi-hat. Or the guitars: the crunchy off-beat figure that comments throughout the track, and the trebly guitar that comments on its comments, and the spectral guitar that plays a rising E Dorian line to ladder up to the refrains, or all the other dubs happy to make the occasional clatter. Or the other touches, like the barely-audible rising string lines in the refrains.

You can talk about the song, happy to stay in its bright E major (some verses seem to pull off into G major, only to be dragged up or down, depending where they are, back to E), with its chassis a set of fat seventh chords (G7-C7-E7, and so on).

All well and good. But “The Next Day” is Bowie’s vocal and little else. Sequenced as the opening track, it’s Bowie offering a demonstration, in a few minutes, that he’s alive and unwell and full of piss and vinegar. His phrasings are delicious consonant runs (“ignoring the pain of their par–tic-u-lar dis-ease-es“), hooked on simple dumb rhymes (“yeah” with “yeah,” ending with “yeah”). His words blur into runs of aggressive sound, as if Bowie’s been penned up for a decade and needs to get this stuff out. Can you believe this? Echoing “Breaking Glass,” he kills off a verse by saying: Listen! Or how a stray line catches the ear—listen to the whores, he tells her—but before you process it, here comes another refrain battering at you.

And what a refrain. Bowie, seemingly doubled by a pantheon of himself, hollers down a world that wants him dead (it wants everyone dead, if you think about it). Who knows whether a line from one of Mick Ronson’s last interviews was in his mind as he wrote it, but “The Next Day” winds up being a curse at death from the ranks of the living. Whatever credos Bowie has offered, whatever dreams he’s encouraged, his work boils down to a line he’d sung at age 22, in “Cygnet Committee“: We want to live.

Even if you’re left half-dead, some near-corpse stuffed into a tree by fanatics, you’re not dead yet. So give ’em the finger, if you can. HERE I AM: NOT QUITE DYING. The anti-epitaph. The bitter pleasure derived from living despite God or the fates’ best intentions. The joy of the numbing business of life, all the small routines, all the breaths and footsteps, the eye-blinks and stomach rumbles. The small beauty of just keeping on, however pointless it all may seem. Tomorrow, and tomorrow, and tomorrow, a doomed Scot once said. And the NEXT DAY and the NEXT and ANOTHER DAY, offers the man from Bromley, roaring out those last words. One foot in front of the other. Live, live, goddamn you: live.

This entry was posted on Monday, August 10th, 2015 at 11:44 am and is filed under The Next Day: 2013. You can follow any responses to this entry through the RSS 2.0 feed. Both comments and pings are currently closed.

66 Responses to The Next Day