David Gilmour was touring in the spring of 2006 as a solo artist, as Pink Floyd, the band whose name and leadership he’d assumed since the mid-Eighties, was finally in the grave. “I’m at liberty to play with Rick [Wright] and Nick [Mason] any time,” he said in 2001. “But the weight of the whole Pink Floyd thing is something that I don’t feel like lifting these days…I just think I’ve grown out of it. Finally.”

He and Roger Waters had sniped at each other for decades over who “owned” Pink Floyd. Waters, the band’s neurotic auteur, had left in acrimony in 1983 and Waters partisans considered the Gilmour-led, still-platinum-selling Pink Floyd to be a shell of its former self. Gilmour and Waters buried the hatchet (at least for a night) in 2005, when Pink Floyd reunited for Live 8, but Gilmour used the occasion as a public burial for the band. There were offers of £150 million for a series of reunion gigs, but Gilmour was done: no more tours, no more Floyd albums.

In 2006 Gilmour put out his first solo record in two decades, On an Island, and it hit #1 in the UK (given the collapse in record sales by 2006, if you had any sort of fanbase, you had a good shot to top the chart on your album’s release week).* He played the Royal Albert Hall for three nights at the end of May, with a band and set list full of guests—David Crosby and Graham Nash, Robert Wyatt, Phil Manzanera. And at the first show, with no fanfare or pre-show hype, David Bowie walked out on stage to help sing the encores.

Gilmour said he chose his collaborators that night from “people I grew up loving…David Bowie might not have worked with Pink Floyd,” he said in 2007. “But it fits with me.” Afterward on BowieNet, “sailor” wrote that “I had a ball tonight singing with David Gilmour and the band. He invited me up to do Arnold Layne and Uncomfortably Numb.” (Bowie felt obligated to note, in a follow-up post, that the latter title was a joke.)

Bowie’s appearance at the Royal Albert Hall, following his performances with Arcade Fire the previous autumn, hinted that he was testing the waters for a return to public life. Soon enough would come the announcements: a new album, even a new tour, perhaps? Any day now, certainly. 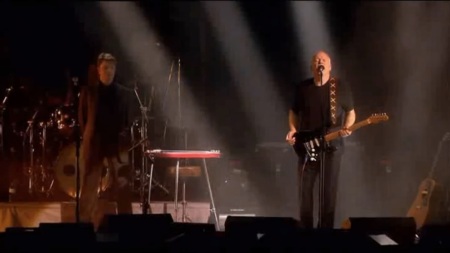 We’re doing this for everyone who’s not here. Particularly, of course, for Syd.

The encore songs were both Pink Floyd pieces: two points far apart on the band’s spectrum, though symbolically linked. Both addressed the man who wasn’t there; a man who, in two months, would finally die, though he’d left the world far earlier.

“Comfortably Numb” is a moment of grace on Waters’ misanthropic The Wall, perhaps in part because Gilmour wrote most of the music. Its lyric was pure Waters: isolation as defense mechanism, using dope-induced quietude to find a lost, better self, exalted self-pity. The B minor verses found Waters in a favorite role as a manipulative bureaucrat—here, a doctor trying to revive the catatonic “Pink” and get him functioning enough to perform (inspiration came from Waters getting a tranquilizer injection before a show during the Animals tour). The Gilmour-sung D major refrain was the release, the needle hitting the vein, the clouds lifting for a moment.

Behind it all was Syd Barrett. Was there ever more heartbroken a band than Pink Floyd? Spending decades mourning a man who’d left them, making album after album in his image. “Brain Damage,” “Wish You Were Here,” “Comfortably Numb” were all Waters trying to contact his lost boyhood friend, to try to see the world as he imagined Barrett did. Barrett’s continued presence on the margins was a rebuke: the fact that he kept on living and enduring (“[Syd] found his own mind so absorbing that he didn’t want to be distracted,” his sister Rosemary Barrett said after his death), that he didn’t need Pink Floyd a tenth as much as they apparently needed him. “When people called [Syd] a recluse they were really only projecting their own disappointment. He knew what they wanted but he wasn’t willing to give it to them,” as Rosemary Barrett said.

Bowie struggled to find his footing in “Comfortably Numb,” in part because he was miscast for the verses. Given the near-conversational melody that Waters wrote to fit his cracked recorder of a voice (it started as something of a Dylan parody, as a studio demo shows), Bowie elevated his phrasings and wound up worrying his way through the song; he’s a doctor who knows he’s a quack.

But before that he’d sung “Arnold Layne,” Pink Floyd’s first single, a Barrett masterpiece. Though it was recorded after Bowie had cut his first album, “Arnold Layne” distilled the latter—Bowie’s little bombardier, cross-dressing barkeep and Uncle Arthur are the children of Barrett’s knicker-thief and jailbird Arnold. Bowie’s songs share Barrett’s empathy for his oddball, his knowledge that there’s little separating him from the official freaks of the world—why can’t you see? Barrett had sung to a silent England. Like “Waiting for the Man,” “Arnold Layne” could seem like a song that Bowie wished he’d written, to the point where he named his “fake” rock band the Arnold Corns in homage to it. Finally singing “Arnold Layne” here, at the apparent end of his stage career, came off as an intro melody reappearing in a closing movement.

Bowie savored the song’s Mockney rhymes (“now ‘ees CORT/a nahsty SORT,” “LAYNE..had a STRAYNGE ‘obby” (see his “The Supermen”: “straynge gaymes thay would play”) and he jibed the refrains. “Takes two to know! TWO to KNOW!” flashing a V-for-victory sign. The freaks and the oddballs had won out, or at least they’d persevered, if keeping to their own worlds, as Syd had. By 2006, Arnold Layne had become a late 20th Century saint: Bowie, Gilmour and Richard Wright sang his name over and over again in tribute.

Two months after this performance, Barrett died of complications related to diabetes. Wright died of cancer in 2008. Gilmour keeps on; he revived Pink Floyd one last time in 2014 for a scrap reclamation effort; he’s got a new album coming this year, it’ll probably hit #1. Waters tours The Wall endlessly (it’s lasted longer now than the old Berlin one). And David Bowie has never performed live in Britain again.

Recorded 29 May 2006, RAH, London. “Arnold Layne” was released 25 December 2006 as a UK/European single (EM 717), with Bowie and Rick Wright’s versions of the song and Gilmour’s take on “Dark Globe.” “Arnold Layne” and “Comfortably Numb” were released 17 September 2007 on the DVD/Blu-Ray Remember That Night: David Gilmour, Live at the Royal Albert Hall.

* For instance, see other one-week UK LP #1s of early 2006: Morrissey’s Ringleader of the Tormentors, the Strokes’ First Impressions of Earth, The Streets’ Hardest Way to Make an Easy Living, etc.

BOOK HYPE: As I think I’ve mentioned, the e-book version of Rebel Rebel‘s now available, for everything from Kindle to iTunes to Nook to Google Play. See the “electronic” list on the book page.

And I’ll be the guest of Evan “Funk” Davies on WFMU this Wednesday, 29 April, from 9 to midnight EDT. So tune in: there should be a lot of Bowie played. The show will be archived on Evan’s page afterward.

32 Responses to The Pink Floyd Set