Anticipating the end of the world is humanity’s oldest pastime…Wars are never cured, they just go into remission for a few years. The End is what we want, so I’m afraid the End is what we’re damn well going to get. There. Set that to music.

“Slow Burn” was Heathen‘s lead-off single. Well, it was in Japan, Europe and the US. Not in Britain, which by 2002 was the only reliable country for a Bowie chart placing. (He’d ceased troubling the US charts in the mid-Nineties: “Slow Burn” proved no exception). Scheduled for a July 2002 UK release, “Slow Burn” never appeared. There was no British single released until September, when “Everyone Says ‘Hi‘” finally arrived to barely break the UK Top 20. Another curious thing was that Bowie quickly stopped performing “Slow Burn” live. He sang it only twice, its last performance at the Meltdown Festival in June.

His label had decided to pull “Slow Burn” from the UK (Bowie had diligently sung “Slow Burn” on seemingly every American talk show in June, and had taped a session to air on Top of the Pops), but its disappearance from Bowie’s live sets as well suggests perhaps a collective realization that “Slow Burn” wasn’t going to do the business. Was it too familiar-sounding, coming off as a generic public conception of a Bowie song? A soaring vocal with a few condor cries (the ninth-spanning “slooooooow BURRRRRN!”); a “Heroes”-esque rhythm track; a guitar line that set out to trump Reeves Gabrels; a doomy lyric.

There’s no evidence that the panicked post-9/11 atmosphere played a role in shelving “Slow Burn” (for one thing, it was a single in America). Bowie said he’d written his lyric before the attacks and that his lines unnerved him, as he’d managed to predict the feel of life in downtown Manhattan that September. There’s fear on the ground. “The walls shall have eyes and the doors shall have ears,” a faint Biblical reference (see Luke 12:3: “whatsoever ye have spoken in darkness shall be heard in the light; and that which ye have spoken in the ear in closets shall be proclaimed upon the housetops”), offered a preview of our national security state. The most damning, most prophetic lines were in the refrain, written years before the Patriot Act, Abu Ghraib and all the numbing rest of it:

But who are we
So small in times such as these… 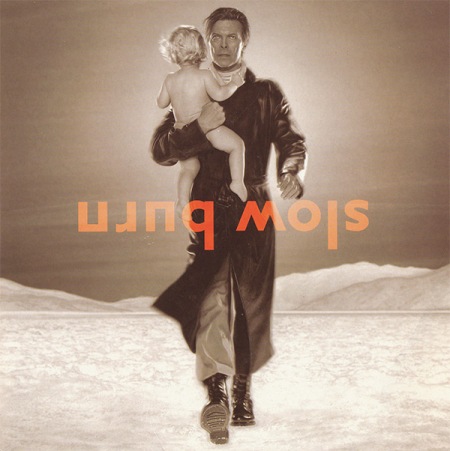 Bowie had been writing about doomed societies since “We Are Hungry Men,” with his descriptions of America as being full of killers, his clay model recreation of Seventies New York as Hunger City, the Five Years left to us, and so on. Apocalypse could be a joyful thing for him—“Five Years” meant five years of carnival before the End. At least the End was more interesting than “normal” life.

“Slow Burn” is a bled-out, bummed-out apocalypse, a recognition that after living on this earth for a while, you come to realize doomsday predictions have the frequency and excitement of commuter trains. In “Slow Burn” the nearly-static harmonic rhythm of the verses (shuttling between tonic and mediant chords, F to Am/E),* the rounds of Visconti and Bowie backing vocals (“on and on and on and on and on…” “round and round and round..”), suggest there’s nothing new under the sun despite this latest catastrophe. Even the return of the Borneo Horns (Bowie’s brass section from the Eighties) is rather muted: the likes of Lenny Pickett nose their way into the second verse and later mainly work in support of the bassline. Kristeen Young offers a piano line that goes lost in a loop. Doomsday once meant the End at last, but now even the End wasn’t going to end: it would just keeping come around, again and again, its colors fading with each trip.

There’s one vein of anger in the track: Pete Townshend’s lead guitar (unlike the lyric, this was a post-9/11 response). Offering an intro hook by answering a long-sustained chord with strings of bent, distorted notes, Townshend reappears after the first refrain for a run of sirens and shockwaves and then hangs on through the second verse, playing the same choppy chord as a counter-rhythm; it’s as if he’s itching to cut Bowie short, that he fears being caught up in the endless cycle as well.

Townshend’s been one of this blog’s minor supporting characters, partly because the blog came close to being a Townshend song-by-song survey: he was the other top contender (if I’d gone with PT, the blog would’ve been called Another Man’s Life). So I found it fun to use Townshend as an ongoing check on the Bowie experiment.

As a character in Bowie’s play, Townshend moves from being a lofty, cutting rival in 1965, lording his powers over Bowie’s shabby band playing Who knock-offs in Bournemouth (see “You’ve Got a Habit of Leaving“), to a fellow Sixties self-mythologist in 1973 (“I Can’t Explain“) to 1980, when a depressed, alcoholic Townshend shows up as a ghost from Bowie’s abandoned England, playing a bitter lead guitar on “Because You’re Young.” The latest reconnection came about when Bowie and Townshend met at a wake, the Concert for New York City in October 2001. Returning to London, Townshend got an MP3 of the rough “Slow Burn,” added his lines via Pro Tools, which Bowie and Visconti imported back in New York. So the most bloodless of their interactions yielded Townshend’s most resonant (and final) contribution to Bowie’s work: he’s the song’s blood infusion. Soon afterward Townshend, in an unfortunate mix of idealism and stupidity, would bring down the whirlwind on himself.

* Moving from the tonic (I) to the mediant (iii) chord means there’s only a one-note difference in the chords. So in our case, it’s F major (F-A-C) moving to A minor/E (E-A-C) and back. Bowie’s just swapping F for E as a “foundation” tone. It’s the same type of progression as Laurie Anderson’s “O Superman,” a possible influence? (More here). The refrain shakes things up a bit with D minor (vi) chords (the opening “slow burn”) and a B-flat IV chord (“but who are we”) but it’s soon back to the F-Am dance.

This entry was posted on Monday, September 8th, 2014 at 12:44 pm and is filed under Heathen: 2002. You can follow any responses to this entry through the RSS 2.0 feed. Both comments and pings are currently closed.