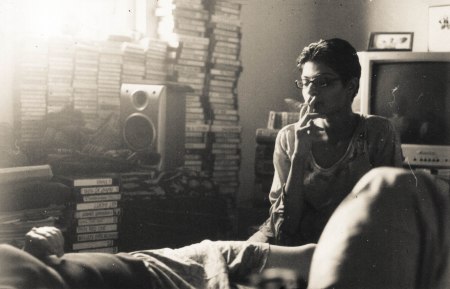 The tattered end of a baggy trilogy (“Look Back in Anger,” “New Angels of Promise“), “5:15 The Angels Have Gone” is also a curtain-raiser for “Heathen”: it’s a world deserted by God, or at least a world whose inhabitants have gotten rather sick of Him. “A man who could once see his angels—hopes and aspirations, maybe?—can’t see them anymore,” Bowie described the song to Billboard in 2002, “and he blames the crushing dumbness of life for it.”

Bowie’s angels had done little more than look for exits. “Look Back In Anger” has Bowie encountering a bored, low-level bureaucrat (one who’s long given up hope of promotion to arch-angel) who taps at his watch and tells him it’s time they should be going. The “new angels of promise” were just avatars in a video game most computers can’t play today. Now even the glum last intermediaries between man and God are gone, leaving us to steer our lives with railway timetables (the same time Pete Townshend’s Jimmy had caught a train to Brighton)* and astrology columns.

Like “I Would Be Your Slave,” “5:15” is a love ballad in which one party is an estranged god: “weeee never TALK an-ny-more!” Bowie pleads in the refrains, which makes you wonder if Cliff Richard was having his own doubts in the late Seventies. But even Cliff had some bravado in his despair: “I ain’t losin’ sleep! ain’t countin’ sheep!” Bowie’s numbed, dulled, concerned only with what he can see before him. He’s in a foreign station, being rained on, the train’s late (this could well be death, or at least Belgium).

A few colors appear here and there: Bowie’s choir, summoned by the keys of his Chamberlin, swirling in eddies and hockets of sound; a piano that scampers through the refrains; Matt Chamberlain’s drum break, a loud, unresolved argument between crash cymbals and whacked kick drum, which foreshadows Chamberlain’s “live” drums ruling the second verse; Tony Visconti’s little grudging nods on his bass.

And there are some past Bowie lives buried in it—Mr. Norris Changes Trains, “A New Career In a New Town,” even “Station to Station”—which adds to the weary circularity of the whole business. There’s the guitar riff, a small shrug of a melody confined to a guitar’s three low strings—one line starts and ends on notes sounded on an open G string, the other just cuts off, disappointed. Or the drum loop, sounding like a man tattooing a pattern on an anvil (with a shaker for company), that keeps on through the C major verses/breaks, which give way to F# minor refrains. Numbed grief gets interrupted by brief spasms of anger.

Go back to Townshend’s “5:15” for a moment (he’ll show up again soon in this survey). Bowie’s departed angels here seem like Mods: thin on the ground, all legs and wings, strange sandy eyes. The Mod could “pass”—in their sharp suits and neatly-cut hair, they could sit on a train and not draw attention, not bother the old with the impropriety of being young, even though (like Jimmy) they may have been bonked out of their heads on amphetamines or be dreaming about setting fire to the train. The Mod were the last angels in our midst, and now they’re gone. Caught the last train for the coast. Bowie’s left among the squares, a fate that his teenage Mod self would have considered worse than death.

* Also likely used for the tactile pleasure of singing “five-fifteen,” one of the more glorious collection of numbers in the English language (two quick nasally syllables cleansed by a deep long vowel; the alliterative push of “five-fif,” with its furtive romance of the lower lip and teeth). “Five-twenty-five” or “five-forty” doesn’t work half as well.

This entry was posted on Tuesday, May 27th, 2014 at 9:47 am and is filed under Heathen: 2002. You can follow any responses to this entry through the RSS 2.0 feed. Both comments and pings are currently closed.