It’s long been Bowie’s habit to rewrite his albums in the press once he’s made them. The Ziggy Stardust “storyline” wasn’t cooked up until 1973, when Bowie described it to William S. Burroughs. So in 2002, a year after having composed the songs on Heathen, Bowie began giving them a narrative structure. Some of Heathen was his version of Richard Strauss’ Four Last Songs, or so he claimed.

“There’s a certain sense of universality in those songs that Strauss wrote at the end of his life when he was 84…they’re the most terribly romantic, sad, poignant pieces that I think have ever been written,” he told Interview in 2002. “I kind of used them as a template.” (His preferred recording was Gundula Janowitz‘s performance (with Herbert von Karajan, 1973), which he described as “ach[ing] with love for a life that is quietly fading.”)

His own Four Last Songs were the album’s bookends, “Sunday” and “Heathen (The Rays),” and two mid-sequenced songs, “5:15 The Angels Have Gone” and “I Would Be Your Slave.” These were end-of-life musings, thoughts on death, parceled regrets, “hard questions.” He’d reached the point, he told Interview‘s Ingrid Sischy, where he felt was no longer growing. “Especially in one’s mid-fifties, you’re very aware that that’s the moment you have to leave off the idea of being young. You’ve got to let it go.” In another interview he said mid-life was a time of no longer becoming, but simply being.

Of course, the grand old man persona of Heathen was as much a fictive personality as Ziggy Stardust had been. Recall that Bowie was only 54—an age when things start to get creaky and the weight of memory is more of a burden, but generally an age still fat in the middle of life. There’s far more pain, loss, resignation, bewilderment and brutal aging to come (my dear acerbic great-aunt, at age 80 or so, once sighed wistfully to me: “ah, to be 50 again!”).

Bowie was playing with our perception of how pop stars age in dog years: if you’ve been kicking around for 20 years (or nearly 40, in his case) in pop music, you might as well be Methuselah. So if the world saw him as an old man, he’d play the old man: someone so bogged with life that he can barely move. 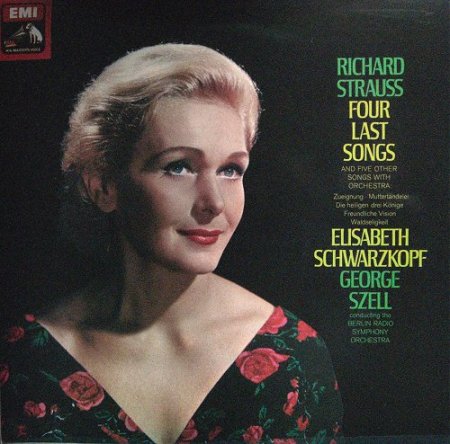 Richard Strauss was a true old man, one who’d lived too long.

American soldiers driving through Bavaria days after Hitler’s death, looking for a house to commandeer as a base of operations, came upon a stately villa in Garmisch-Partenkirchen. An ancient man strode from the front door, announced he was Richard Strauss, composer of Der Rosenkavalier and Salome, and told them to leave. Kind fate allotted one of the soldiers to be a classical musician, who gave Strauss the cover of deference and defused any chance that Strauss would’ve been hauled into a collaborators’ prison. Soon enough, troops had spilled into Strauss’ villa, asking “Hey Maestro! Who’s this guy?” when seeing a bust of Beethoven. Classical Germany fell to gum-cracking Americans at last.

By now, the 20th Century seemed a colossal joke to Strauss. Born in 1864 in a Bavaria still ruled by its mad emperor, Strauss lived through Bavaria’s absorption into grey Prussia to form Germany, the whirling spree of Kaiser Wilhelm’s lost empire, four years of catastrophic war, Germany’s subsequent fall into fascism, genocide and thuggery (which Strauss, to his great discredit, partly condoned), another horrific war and now, in 1945, utter defeat. He would even see the carving up of Germany into capitalist and Communist halves. “I have outlived even myself,” he said in 1949, upon which he finally died.

Strauss didn’t intend his Four Last Songs as a last statement: the title wasn’t his, for one thing. In 1948 Strauss scored three Hermann Hesse poems and one by Joseph von Eichendorff. Only after his death, when the four songs were grouped as a single work and re-sequenced by Ernst Roth, did the songs become his Four Last.* But the songs obviously shared a sense of reminiscence (they were scored for soprano, as if Strauss was writing songs for the memory of his wife’s singing voice) and cyclicality: in one, he quoted from a tone poem of his youth, Tod und Verklärung.

And as much as the songs spoke of resignation, death and transformation, there was a thick vein of defiance in the music. Their beauty could be smothering (Hesse, hearing Strauss’ adaptations of his poems, said they “were full of well-crafted beauty but lacking in core, merely an end to themselves.”), their vocal lines cathedrals to a woman’s voice, their brass-and strings orchestration that of a royal court. The songs proposed that the mad century had never happened: it was Strauss willing away history in the last of his music.  The Songs “were so potent as to render the idea of relevance irrelevant,” Alex Ross wrote in 1999. “They destroyed, single-handedly, the modernist imperative of progress—the notion that music must always be made new. Strauss, in fact, had gone neither forward nor backward…A progressive had become a reactionary by standing absolutely still.”

Bowie was looking out a window of Allaire Studios early one July morning in 2001, drinking his first cup of coffee. He saw two deer grazing on the mountainside and beyond them, a car slowly passing along the Ashokan Reservoir to the south. “There was something so still and primal about what I was looking at outside,” he recalled. He began to weep, began to write.

What had the image triggered? Not simply the idea of a depeopled world, one left to the deer and the crows to forage. The man or woman in the car was part of it. Were they, for a moment, in harmony with the plants and animals, or were they in the usual role of oblivious despoiler? Or did the view suggest how the world’s oblivious to our comings and goings? We depart from life one morning and the animals take no notice, the sun keeps on its paces. The slight absurdity of a man in a luxurious recording studio built in a plutocrat’s mansion weeping over the thought.

“Sunday” begins on a remote E-flat minor chord, and over a long, looping vine of a verse it tentatively grounds itself in A-flat minor. There are few voices at first: a treated guitar playing the same birdsong figure again and again; the occasional bass note, like a man quietly sounding the depth of a wall; a bed of voices to cushion the lead vocal and establish the chords, rising and ebbing in volume with each loop (the vocals were mainly Tony Visconti, who taught himself to sing “two notes at once after singing Tuvan and Mongolian music”).

The lead voice could be a man who’s survived an apocalypse, offering instructions to fellow foragers. Watch out for drifters and cars (an echo of the Mekons’ “Trouble Down South,” with its England as an American war zone: look out for wires…stay underground). It’s equally the voice of an animal, one making its way through a world ruled by indifferent nature and malicious homo sapiens. Watch for shafts of light on the road: they mean death. Crawl under the bracken for safety.** Run when the rain lessens. Follow the sun (where the heat goes). Man and animal are no different. The world is no place for either of them. A song from decades before plays in an empty room: when the rich die last, like the rabbits running...

Yet just as “Sunday” seems lost in its meander of a verse, the song gathers force. There’s movement. An elevation to F minor; the guitar is loosed from its trap; a bass drum pattern sets a floor. A paradoxical declaration: nothing has changed, everything has changed, so everything is nothing? “Nothing” is an active force: it has a beginning, it remains, it’s mutable.

The song becomes a chant. A mantra chorus of Bowie and Visconti voices is mixed right (“in your fear seek only peace…in your fear, seek only love”) while mixed left is Bowie’s lead vocal, in grand Scott Walker register, offering hints of resurrection—burning in the pyre, rising through the air, off to do it again. The associations with the fires and the smoke of the World Trade Center were unintentional, Bowie said: he’d written the lines before the attack (though he crafted the track in the studio in the months afterward). At 3:09 the track skips, resets itself.

Something has changed, though. The second verse is shorter, Bowie’s voice now harried by an electronic drum pattern. This is the trip (a lifetime), this the business we take (our souls, our baggage of dreams and fears). Then another ghost: Hush little baby, don’t you cry. You know your mother was born to die. It’s the refrain of the folkie standard of the Sixties, “All My Trials,” as sung by Joan Baez and Dave van Ronk and Nick Drake, and maybe even Bowie himself on stage with John Hutchinson and Hermione Farthingale in 1968. All my trials, Lord, soon be over.*** This world’s spent out: I’m going home. But Bowie sings that his trials will be remembered (by who?): he’s still in love with the world he’s leaving. Strauss would have approved.

His last word is a last defiance, Bowie hanging onto “chaaaaaanged” as long as he can while Matt Chamberlain roars in, brutally chastising his snare drum. Visconti’s bass is a jungle line. On stage, Bowie let his guitarists play “Sunday” out for minutes, letting his audience bask in the triumph, but on the studio version the heroics get faded out quickly, the rebirth hardly mattering. Sunday may be a day of resurrection, but night falls without fail on it.

Recorded: (basic tracks, vocals) August-September 2001, Allaire Studios, Shokan, New York; (overdubs) October 2001-January 2002, Looking Glass Studios, NYC. Released 10 June 2002 on Heathen. There were alternate mixes by Visconti (included on the European “Everyone Says ‘Hi'” single and the Canadian “I’ve Been Waiting For You” single) and Moby (included on the 2-CD version of Heathen). The former managed to make “Sunday” into a pop song, its undercarriage now a jogging loop of “ah ah ah ah” voices a la “O Superman”; the latter was pointless.

* Strauss also orchestrated an 1894 song, Ruhe, mein Seele!, in 1948 and was working on another piece—it’s arguable he was considering the songs as discrete units (the Hesse poems as one opus number, the von Eichendorff as another, etc.) and never would have classed them as a single work.

** Probably the only time “bracken” has been used in a rock song. [edit: no, “bracken” turns up in Robyn Hitchcock’s “No, I Don’t Remember Guilford” and XTC’s “The Meeting Place” and likely others—thanks crayontocrayon & Casey W.] The phrase “under the bracken” is in D.H. Lawrence’s “A Fragment of Stained Glass” (a narrative with some similarities to Bowie’s lyric here) and Tove Jansson’s Moominpappa’s Memoirs.

*** “All My Trials”/”All My Sorrows” is a fascinating piece of American ersatz folklore. Though often claimed to have been derived from a 19th Century slave spiritual, the song is likely a cuckoo’s egg—a piece cobbled together ca. 1955, its lines a hash of cod-spirituals and John Bunyan-esque imagery over a melody nicked from a Barbadian lullaby.

This entry was posted on Monday, May 12th, 2014 at 12:41 pm and is filed under Heathen: 2002. You can follow any responses to this entry through the RSS 2.0 feed. Both comments and pings are currently closed.