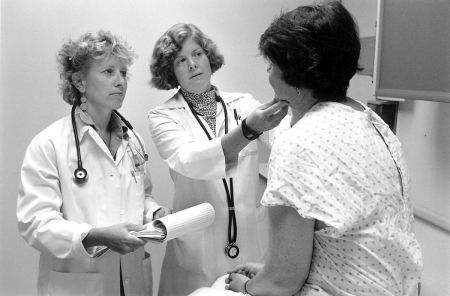 Being a pop music fan is transactional. You buy the records (well, you used to), and if you like them, you join the fan club: pay your dues, subscribe to the newsletter, and maybe you get an autographed picture in the mail, or an exclusive Christmas record, or first dibs on concert seats. If you’re a member of the fan club in good standing, you could win a contest to go backstage or have lunch with the star, or maybe his drummer. The more time and money you devote, the further you can go into the circle (but only so far). It’s a one-sided relationship seemingly designed for abuse: fan clubs milked for cash by managers; female fans sexually propositioned by roadies, bodyguards and hangers-on for backstage access.

What was hopeful about the first generation of Internet pop music fandoms was that (sometimes) both parties, fan and star, seemed to want a less exploitative relationship. BowieNet was among the brightest of the new worlds: for a relatively cheap subscription, you got a number of actual exclusives and chances to “talk” to Bowie online. And the site was serious, for a time, about keeping up its participatory half of the deal. BowieNet members got to vote on single mixes and cover art; most of all, fans competed to write a lyric for a Bowie song.

This was a gimmick: “What’s Really Happening?,” the first “Cyber Song,” with Bowie singing the fan-written lyrics in the studio while being filmed via webcam and a Lucent 360 “BowieCam.”* The webcast provided “a ground breaking “insiders view” into the studio session,” as per the breathless PR copy.

The contest ran from 2 November to 15 December 1998. Bowie claimed he read through most of the reported 20,000-25,000 entries (“there were a lot of potty ones,” he told Chris Roberts: one wag rewrote “Laughing Gnome” to make it fit Bowie’s melody, another sent in “Wind Beneath My Wings” unaltered). He found many fans contributed work in the vein of the as-yet-released ‘Hours,’ “very soul searching and angst-ridden” stuff. There were some funny contributions too, “so flip they’re almost successful, because they were written with such a lack of responsibility attached. Often things work really well when you don’t feel the pressure of having to make them good. To play at something is often more productive than earnestly striving.”

He (and BowieNet voters) narrowed the entries down to 25, then he picked a 20-year-old Ohioan, Alex Grant, as the winner. “It was impertinent, it scanned well, and it was easy to sing,” he said of Grant’s lyric. Hoping to reduce the number of “Cygnet Committee”-style rants, Bowie had offered as a template to would-be lyricists a wordless top melody rough track: three sets of four lines, mainly seven syllables each (the end phrases shortened to five). Grant’s lyric tightly fit the metrical constraints and shifted from an AAAB rhyme scheme (box/locks/clocks/mind) to an AAAA one (eyes/bye/lie/cry) to an ABAA second verse (glass/sinking/past/last).

Grant wanted the lines to question the medium that created them. “When I first logged on three years ago, [the Web] was this beautiful magic thing but after a certain amount of time I was getting stuck inside of that, my whole life became the Internet,” he said in an interview at the session. So the opening verse is a look at “virtual” life, our personae now grown inside Dell desktops or iMacs, with the natural mechanics of our bodies reduced to “outdated clocks.” This idea went a bit astray in the last verse, with its sinking glass clouds “falling like the shattered past,” though this stanza was the most Bowie-esque, with a clunky mixed metaphor that seemed derived from a cut-up.

For his troubles Grant got a $15,000 publishing contract from Bug Music, the complete Bowie catalog on CD, a $500 gift card to the internet retailer CDNow (in its last year of independent existence), subscriptions to BowieNet and Rolling Stone magazine and the raw envy of other Bowie fans.

They’re amazing kinds of people…I’ve been through the fan sites of other artists and I’m really proud of my lot…Because it’s produced a kind of a community feel, that one doesn’t become the focus of everything all the time. It’s amazing how much you get into their lives and find out about what they’re doing and what’s interesting them other than just being part of the BowieNet site.

The “What’s Really Happening?” contest was reminiscent of Todd Rundgren’s No World Order, a 1993 Rundgren project in which fans were producers and engineers: you could alter the tempo of tracks, choose different mixes, make bars a capella or dub in guitar lines. You could make Rundgren’s record your own, veto his decisions. This was the Nineties’ idea of 21st Century pop: you, the fan, would help make the music; you would become an aesthetic minority shareholder of sorts.

Yet by encouraging fan participation at a lyric-writing or mixing-stage level, was the artist consigning her work to communal mediocrity, making it a slush of good intentions? Would you want to hear Something/Anything, the work of one weirdo locked in a studio playing nearly every instrument, or No World Order? Was the artist giving away too many magic tricks? The night Bowie and Grant recorded “What’s Really Happening?” BowieNet fans had a real-time comment thread as they watched the session: “Bowie’s drinking a Zima!” “What a boring song!” “Reeves is a Teletubbie” “Whoever wrote Shinin’ Star wasn’t an experienced songwriter either :)” “Coco [Schwab]: how did you get the nickname Coco?” “you haven’t missed anything except David wailing the same line incessantly“). (It’s archived here.) Imagine a live thread while Bowie and Eno cut “Warszawa” (“wtf is this in Portuguese?” “I MISS RONNO”) (cf. the Sermon on the Mount scene in Life of Brian).

It’s telling that “What’s Really Happening?” was a dead end: never again would Bowie offer this degree of fan participation. As I wrote in the BowieNet piece, Bowie now uses the Internet as a one-way distribution hub: putting out product, letting fans respond to it and hype it as they will. Where the creative fan impulse went, where the sense of community went, are the Bowie fansites on Tumblr. Occasionally something from my site gets reblogged 100 times, sending the quote or photo off into this seemingly endless run of Bowie fans, who make GIFs of his various incarnations, who write poems and limericks about him, who annotate and snark at and love him. This, as it turned out, is 21st Century fandom: not artists ham-handedly trying to make their fans Official Contributors, but fandom on its own branching off into thousands of bottle universes, forming and breaking off like atoms. It’s about as happy an ending as one could hope for.

“What’s Really Happening” as a composition and recording gets lost in these sort of discussions. So a brief consideration: it’s a basic G Dorian song whose verse melody is a Sixties mingle (2 cups “You Keep Me Hangin’ On,” 1 cup “Pictures of Matchstick Men”) and whose main guitar riff comes off as a tribute to late Britpop (see Space’s “Female of the Species” or Suede’s “She’s in Fashion“). The hectoring chorus, with its glum accumulation of major chords (D-C-B-A), was among the dreariest he’d written in a decade, with Bowie reduced to recycling a line from Tin Machine’s “One Shot.” (It’s ironic that while Bowie likely kept control over the chorus to ensure his “Cyber song” at least had a hook, one wonders if Grant could’ve improved it).

Some backing tracks had been cut in Bermuda, while during the “Cyber” session in New York Reeves Gabrels cut some lead lines and Mark Plati, producing the session, did some bass overdubs (Grant and a friend, Larry Tressler, sang some backing vocals). Comparing the demo version to the final cut shows a decision somewhere along the line to clutter up the mix, perhaps in the hope of distracting from the fact that the song’s basically over at the two minute mark, with Bowie having to repeat half of the first verse and the intro (there’s a brutal cut at 2:36, suggesting they just looped the original intro) before we get to Gabrels’ outro shreddings.

Initially Bowie said “What’s Really Happening?” was going to be a Web exclusive (the contest rules didn’t specify that the track would appear on the album), but he later chose to include it on ‘Hours,‘ and fairly prominently (it was the lead-off track of Side 2 for the dwindling number of cassette buyers). Its tempo and guitars served as a good dividing point between the somber “Side 1” songs and the “Side 2” rockers. A time-stamped curio, “What’s Really Happening?,” more than any other Bowie track, is also the product of noble intentions.

* Everything under the moon in 1997-1999 apparently had a “Bowie” prefix; you wonder if Looking Glass Studios had a “BowieLoo.”

** Bowie cracked to Roberts that “I can now nick 25,000 songs over the next few years. It’s all done for me, no prob. It’s all fitted out, I got it in a big store room. Change the odd word, nobody’ll ever know, who cares?” When Roberts joked that the songs would all have the same chorus, Bowie replied: “So what—all this shit is up in the air. Intellectual property? Don’t make me larf!”

Note: I tried to track down Alex Grant for this entry, as he’s never been interviewed for any Bowie bio or magazine piece, and I thought he’d provide some fresh perspective. Given his relatively common name and a lack of Internet footprints (BMI lists him only as the co-composer of “What’s Really Happening?”) I had no luck. Mr. Grant, if you by chance read this, please contact me and I’ll put up any response/recollections you’d like to make (even if it’s “wow, your site sucks”).