“I’m Afraid of Americans,” made and remade over the course of two years, has no definitive version. It’s an Earthling album track, a soundtrack obscurity and, in its most popular incarnation, a Trent Reznor single remix, which was a minor US hit in 1997. Slot it as another of Bowie’s “stateless” songs, in the company of “Holy Holy” and “Strangers When We Meet.” Originally called “Dummy” (a Portishead nod?), the song came out of the final sessions for Outside in January 1995, its initial mix a fairly rote Brian Eno concoction of drum, synthesizer and distorted vocal loops, a few of which—a monotone laugh hook and a synth hook that pinged around an E-flat octave—persevered through most subsequent revisions.

Its first lyric hinted at Bowie’s renewed interest in David Byrne (see “I Have Not Been to Oxford Town”), its chorus calling back to the Talking Heads’ “Animals”: “I’m afraid of the animals!” Bowie howled, with an apparent vocal improvisation turning “animals” into “Americans” by the close of the track. Not making the cut for Outside, “Dummy” was quickly slated for Johnny Mnemonic, a Keanu Reeves-starring adaption of a William Gibson short story, which opened in May 1995.* But allegedly Eno told Bowie to rescind the offer, as the film sounded bad (one ill omen: Bono had been offered a role and turned it down). So instead “Dummy,” by now retitled “I’m Afraid of Americans,” wound up on the soundtrack of Joe Eszterhas’ and Paul Verhoeven’s Showgirls.

This was the version of “Americans” that I first heard, as Showgirls, at least in New York in the winter of 1995-1996, quickly evolved from first-run flop into a cult film playing the midnight circuit. Given the ludicrous nature of Showgirls, (“I’m erect. Why aren’t you erect?” “Only people I know got pimp cars are pimps.” Only Road House has better lines), Bowie growling lines like “dummy wants to suck on a Coke” seemed appropriate—its lyric is basically poor Elizabeth Berkley’s plotline in the film. The Showgirls soundtrack, an uninspired collection of mild Goth and pop industrial, was released around Christmas ’95 and went into rotation, well at least in a few West Village and Upper East Side bars I frequented, more for its connection to the revered film than for any merit of its own.

I mention this because “I’m Afraid of Americans,” from my perspective, was the last Bowie song that had any purchase in America, the last song of his (chronologically-speaking) that I can recall hearing in public, Bowie’s voice intoning in a club or piping out through car speakers (mainly the track’s Reznor mix incarnation). In the US at least, “Americans” is the last Bowie song that rattled around in a wider culture, existing outside of Bowie fandom: its paranoid video was part of the TV compost of the late Nineties. 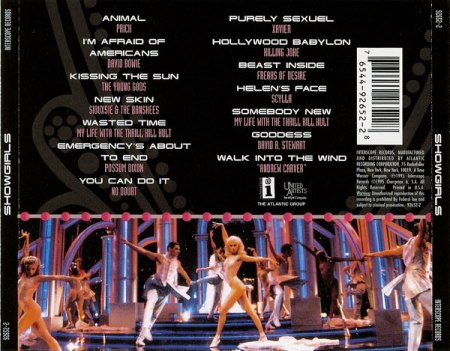 Maybe he was embarrassed that a song of his wound up on the Showgirls soundtrack, or he might have been looking for workable material in the time-tightened Earthling sessions. In any event, Bowie revised “I’m Afraid of Americans” in August 1996, changing the lyric’s protagonist to “Johnny” (a callback to Mnemonic, or perhaps to Bowie’s own “Repetition.”)

He kept the structure of the song, a one-chord vamp in F major,* mainly intact: spare verses sewn through with loops and hooks and given a near-conversational phrasing, Bowie keeping to a two-note range; choruses where multiple-tracked guitars kicked in and Bowie moved to his higher register, his phrases now spanning fifths (“afraid of the WORLD,” “afraid I can’t HELP IT”). For Earthling, he transposed and rewrote verses: the Showgirls version’s opening verse became the Earthling version’s third, while he put in a new opener that incorporated the “laugh” hook.

The remake was bright and “current”: its arrangement was a stew of everything from Nine Inch Nails to favorites like Underworld and Photek (the new opening line sounded like “Photek’s at the wheel”), its mix was in line with the post-Pixies, post-Nirvana “alternative” rock template of volleying between sonic extremes for verses and choruses. But the new mix was also cluttered, with seemingly every bar affixed with baubles: a keyboard gurgle, a feedback whistle, assorted static, twinging high synth note loops, a synth line in the chorus that sounded like “Macarena,” various Reeves Gabrels pull-offs and bent notes. For ballast it had its main hook, a riff sounding root and fifth notes of the F chord, carried first on keyboard and then, in the chorus, thundered by Gail Ann Dorsey’s bass.

So dedicated to spectacle, the Earthling “Americans” could fumble the drama: the climactic “God is an American” section began with Bowie singing over Mike Garson’s keyboards, a sense of lightness and unease (slightly suggesting Laurie Anderson’s “O Superman,” which Bowie would play live during the subsequent tour). But the mood died when Bowie then up-shifted to another chorus, singing, in strained voice, over jacked-up drums. Still, the tasteless shifts in tone and the over-the-top mix fit what Bowie intended: the singer was afraid of Americans, but his song was meant to cater to their debased tastes.

Where the song’s first lyric had Bowie afraid of the natural world, in later versions his paranoia found richer territory. “Americans” were an easy target. By the mid-Nineties, with the Cold War wound down and the virtues of Yankee capitalism unquestioned, the public face of the United States, to some, was a bloated, drunken fan celebrating his team’s victory well after the game had been called. God is an American, as Bowie sang.**

As much as Bowie had been fascinated by America as a kid, as much as commercial success there had consumed him in the early Seventies, he never shook his view of the country as being fundamentally crass, incoherent and violent (he loved to describe his first visits to the US in 1971-2 as a time when there were “snipers on the roofs”). He explained the lyric of “Americans” to journalists by saying he was referring to the public face of America, the one that everyone else in the world has to see: its gaudy advertisements, its junk food, its all-conquering franchises, its action films. “I was traveling in Java when [its] first McDonald’s went up: it was like, “for fuck’s sake,’” he said. Meanwhile the “real America” of blues musicians and Beat poets (“the aspects of America that are really magical to us,” Bowie said) remained hidden, even (or especially) at home.

There was a bit of Gnosticism here: while the visible America is a false, fallen world, the true “magical” one is accessible only to those who learn to see it. What most of us see is just surface America, the backlot that “Johnny” walks through in the song while eating, driving, screwing, preening in the mirror. Even the false God (again, pure Gnosticism) who created the world is an American, and he’s busy drowning out any murmurs of resistance with Entertainment Tonight and the OJ Simpson trial.

But Bowie’s “real” America was just as tainted: blues musicians and Beat poets are just as commodified as Pepsi, as are “outsider” artists, punk rockers, skateboarders, rappers and any other potential subversives. They’re just less-attended wings of the same carnival tent. The fact that “I’m Afraid of Americans” became a minor US hit (like “Young Americans,” another jeremiad turned into a good-time song by the country it belittled) showed how the carnival endures: piss on the tent, and you get brought in and made into a fresh act.

Its video was a European tourist’s nightmare of walking in an American city. Some thuggish American will single you out for your weird clothes and accent, and chase you down; everyone’s armed; the street people are jabbering and menacing; the cabbies are lunatics; the whole place is overrun by machine guns and Christian fanatics. (Trent Reznor, looking like a Manson Family member and wearing Travis Bickle’s jacket, plays a convincing heavy).***

The video used Reznor’s first remix of the song, which was issued as the radio single. In it, Reznor scrubbed the track of much of the Gabrels/Eno jiggery-pokery, instead staggering new loops and riffs for ominous effects (a static grinding noise mixed right builds to swamp the first chorus). The bassline is held back until the second chorus, where it’s delivered via harsh, distorted guitar. Later choruses are shaken by jackhammer synth beats; “God is American,” chanted over a chanted loop that’s shadowed by an murderous bassline, is the last word: the song never returns to the bravado of its chorus again, instead just muttering its way to the fade.

For me, it’s the best version, but other spins of the wheel turn up equally appealing/appalling faces: the fledgling version trapped in the high trash of Showgirls; the geegaw-filled Earthling take; the Ice Cube remix, where Cube chases Bowie’s voice through the track as Reznor did in the video (“shut up and be happy!” he yells. “Superbowl Sunday!“); the various live versions that rely on the muscle-flexing chorus for effect. A hydra-headed song, “Americans” is Bowie’s last bitter populist moment.

Original version recorded ca. January 1995, Record Plant, NYC, and released in December 1995 on the Showgirls OST (Interscope 92652-2). The remake, recorded at Looking Glass Studios in August 1996, appeared on Earthling, while Reznor’s various remixes were issued on a US-only CD single (Virgin V25H-38618, #66 US), issued October 1997. Performed live throughout the remainder of Bowie’s tours.

* Most of the time the song stays on a F7 chord, but the guitars shift to F5 power chords to beef up the choruses. A C minor (the dominant chord of F’s parallel minor) makes a cameo appearance in the “God is an American” section.

** One ancestor to this song is Jackson Browne’s “Lawyers in Love,” a vicious late Cold War satire in a cheery pop package, complete with doo-wop breaks: it’s the US fulfilling its Manifest Destiny at last (“now we’ve got all this room! we’ve even got the moon!“), with God sending spaceships down to blessed America in time to watch us watch the six o’clock news, and where even the layabout Jesus Christ has to get a job. Browne’s prediction that “I hear the U.S.S.R. will be open soon/As vacation land for lawyers in love” was pretty much how it turned out.

*** Recall that around this time the papers were playing up a “wave” of German tourists being mugged and killed in Florida. Also, the ill-fated 1996 revival of Doctor Who opens with Sylvester McCoy walking out into a San Francisco street, immediately being shot by thugs and dying on an operating table thanks to American surgical malpractice.

50 Responses to I’m Afraid of Americans