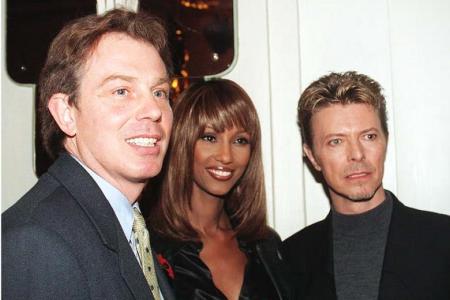 Having revived Tin Machine for the title song of Outside, Bowie perhaps had the Machine on his mind for “We Prick You,” his hostile takeover of an Eno drum track. With a refrain that originally went “we fuck you we fuck you we fuck you” and lines like “dripping on the end of a gun,” it easily could’ve been a crass, wearisome track, in line with the Machine at its most tasteless. Instead “We Prick You” was punchy, catchy and strange, another in a set of songs on Outside that found Bowie managing to refine his work from the past decade: Outside can seem like the music Bowie thought he was making in 1987 or 1989, a better realization of his ambitions.

Eno provided the drum ‘n’ bass-lite loops and the various synth colors, like the “marimba” fills that wink in and out and the main four-note synth riff that repeats throughout, and which slightly distorts towards the close (the track was originally called “Robot Punk”). But he was also heard in Bowie’s array of bizarre backing vocals, some of which sound like zombified Eton toffs, and which could all hail from the funny-voice bestiary of Eno’s “Dead Finks Don’t Talk.”* Bowie had even wanted to sample Camille Pagila for the “you show respect, even if you disagree” tag, but wound up doing it himself via varispeed (Bowie kept trying Paglia’s office, but she thought it was a joke and never called him back). On stage Bowie responded to this voice as if it was an officious God, talking back and shaking his head.

“We Prick You” moves from spare beginnings (a bassline over two drum loops, mixed far left and right, that’s joined, in eight-bar increments, by a drum machine and two main keyboard tracks) to a chorus that boasts one of the finest latter-day Carlos Alomar guitar riffs, a piece of barbed funk that calls back to the Miracles’ “Love Machine.” Alomar was just one hook in a track devoted to them—the “I’m Not in Love“-esque loops of endless “ooohs” high in the mix in later verses, the goonish counter-melodies (“shoes, shoes, little white shoes“), Bowie’s righteously sung “TELL the TRUTH! TELL the TRUTH!,” and the title line, repeated thrice like an anathema, and which is occasionally pummeled by snare drum fills.

The lyric has a similar density, working as: a blunt sex joke; a more subtle sex joke (“wanna come quick, then die”) playing on the phrase “little death” as orgasm; a feminist statement (the chorus could be Woman putting Man on trial, the first lines yelled by the prosecutor, the title line being the defendant’s confession); the trial of Leon Blank in Bowie’s anti-narrative; an occult reference (the alchemical symbol of Christ being pierced with a spear); and the idea of sex as a form of bodily mutilation, a variation of Ron Athey’s 4 Scenes in a Harsh Life, where Athey had stuck needles into his arms and scalp during his performance. A collection and implosion of ideas and sounds, signifying nothing and seemingly everything, “We Prick You” is Bowie at his purest.

Recorded ca. January-February 1995, Hit Factory, NYC. In 2012, another mix of “We Prick You” surfaced (see above) with some unfinished Bowie vocals; it was possibly an outtake from the Hit Factory sessions. Played only during the Outside tour.

* One of the voices on “Dead Finks” is Eno’s dead-on parody of Bryan Ferry.

Top: Ambitious man, in search of steady employment, consults with established power couple at the Q Awards, 1995. (Jarvis Cocker presented the “Q Inspiration Award” to Bowie and Eno that night.)

This entry was posted on Monday, March 18th, 2013 at 11:29 am and is filed under Outside: 1995. You can follow any responses to this entry through the RSS 2.0 feed. Both comments and pings are currently closed.

67 Responses to We Prick You