I have to leave that to you guys. But I would get behind it [her career] a lot more if I really felt anything for her music. It’s conventional in the extreme. I guess I’ve seen too much, because I don’t really find her provocative, either.

While Nile Rodgers gamely talked up Black Tie White Noise during its release, he later said he’d been frustrated and disappointed with the record. In a long, hilarious rant to David Buckley, Rodgers groused that his hands had been tied throughout the sessions, that Bowie was running away from making the radio-friendly smash that the world expected from a Rodgers/Bowie collaboration (“Star Wars 2,” as Rodgers called it). Instead, Bowie seemingly wanted to make a private album on a platinum budget (“This record is about my wedding,” he said, to which Rodgers replied: “But David, no one cares about your wedding! Let’ s make a hit!“) and kept rejecting the guitar licks that Rodgers played him (“maybe the licks I thought of stank…but I knew they couldn’t all suck!“). Rodgers tried to use Iman, a friend of his, as an intermediary, but she backed her husband.

The problem was that a decade had passed since Let’s Dance, and Bowie had been through the crucible of the Never Let Me Down debacle and the Tin Machine years. He couldn’t make himself commit to a record that pretended the past 10 years hadn’t happened: he couldn’t make Star Wars 2. Compromising his songs, guessing at a sound that a mass audience would find palatable, had only gotten Bowie Tonight. So the intentions of producer and singer had reversed. In 1982, Rodgers, trying to make a name for himself outside of disco, had wanted to make an art-rock record like Scary Monsters: it was Bowie who pushed for a more marketable sound. Now Rodgers, a long-established hitmaker, wanted to have another #1 album to his name, while Bowie wanted a stranger, jazz-influenced, club-oriented record.

Nothing baffled Rodgers more than the fate of “Lucy Can’t Dance” (“a guaranteed number 1 record,” he later said. “Imagine Nile Rodgers and David Bowie come out with a song called ‘Lucy Can’t Dance’? I was already accepting my Grammy“). An easy choice for a lead-off single, “Lucy” instead was nearly shelved, Bowie only relenting by including it as a CD bonus track. Bowie’s never said why he did this. Perhaps the song’s cheery, trebly sound clashed with the rest of the album; perhaps he thought “Lucy” was such an earworm, such a piece of candyfloss, that it offered too easy a pleasure, that he would look ridiculous miming it on Top of the Pops. 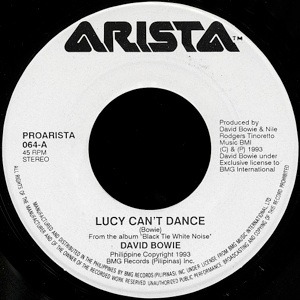 Like “You’ve Been Around,” “Lucy” was a half-decade-old composition. Originally called “Lucille Can’t Dance,” it dated to the 1988 Los Angeles session where Bowie had demoed “Pretty Pink Rose.” While the original demo isn’t circulating, so it’s unknown how much the lyric changed in four years, the final “Lucy Can’t Dance”* is Bowie’s vicious take-down of an artist that many at the time considered to be his successor: Madonna.

As with Gary Numan, Bowie lacked his typical generosity of spirit towards his contemporaries with Madonna, to whom he could be cutting, even cruel (making a joke about Madonna getting beaten up by Sean Penn on “Pretty Thing”). Whether it was paranoia, that a younger, hungrier artist was taking some of his best bits, or just an old con artist deprecating an up-and-coming one, as he could easily see the seams and wires that the audience was missing, Bowie’s general dismissal of Madonna is understandable, if petty and regrettable (imagine the music the two could have made together).

So “Lucy Can’t Dance” is a piece of well-aimed snark, targeting Madonna at a time when her cultural presence was inescapable (it was the era of the Sex book, one of the most tedious and expensive pieces of pornography ever released). “Lucy, I know what you’re going to do” (because he’s already done it)…now you’re looking for God in exciting new ways” (as if predicting Madonna’s Kabbalist period). Who died and made you material girl? (a sharply clever line, making the typical play on “material girl” but also suggesting that Madonna only took form when someone else (cough) had left the stage). And the chorus refrain, Lucy can’t dance but she knows what the noise can do, is a pitiless indictment of an artist who has no soul but who approximates the music of those who do.

Of course, all of this could have been said about Bowie as well, and he knew it: Bowie’s lines in the bridge (“So I’ll spin while my lunatic lyric goes wrong“) mock his own penchant for word-salad lyricism and his own cracked ambitions. But all the best put-downs have a taste of self-mockery in them (“Like a Rolling Stone” is arguably about Dylan himself as much as Edie Sedgwick, or whoever the intended target was): it just adds sting to the venom.

A rather shapeless song, “Lucy” was built of long sets of verse/refrains that alternate between A major and G major, and a D major-based chorus, linked by a harmonically-chaotic bridge (rambling up from B minor (“pursuing your frenzy“) to a G major (“sexual noise”)/G minor (“you live and you die“) switch-up to close on a diminished E chord (“eye“)). Its vocal phrases keep to a few patterns: a fourth-descending line in Bowie’s lower register (the opening lines of the verse; the chorus hook), a double-tracked rising-and-dipping line that’s up an octave (“did the world just explode...”) and the nagging “da da da da-da da-DA-da-da” hook.

Rodgers shaped the track to pop on the radio, loading it with hooks: showers of clacking percussion (the opening burst sounds like pencils being rattled in a metal can), his low-mixed, underwater- sounding guitar fills, trumpet blasts, a unyielding synth bass. All for naught: the song slipped out, barely noticed, offering only a suggestion of an alternate 1993 in which “Lucy” fought it out with Madonna singles on the radio.

Recorded ca. summer-autumn 1992 at Mountain Studios, Montreux and the Power Station, NYC. Released as a CD bonus track on Black Tie White Noise, though it was issued as a promo single in the Philippines in 1993.

* “Lucille” suggests Bowie was considering an early rock & roll reference at first (either/both the Little Richard song and BB King’s guitar). “Lucy,” in addition to being easier to sing, may also be a nod to The Linguini Incident, as it was the name of Bowie’s co-star Rosanna Arquette’s character (& in another Madonna tie, Arquette had co-starred with Madonna in Desperately Seeking Susan). And of course, Nile Rodgers had produced Madonna’s Like a Virgin soon after he’d made Let’s Dance.

This entry was posted on Tuesday, September 25th, 2012 at 12:00 pm and is filed under Black Tie White Noise: 1993. You can follow any responses to this entry through the RSS 2.0 feed. Both comments and pings are currently closed.