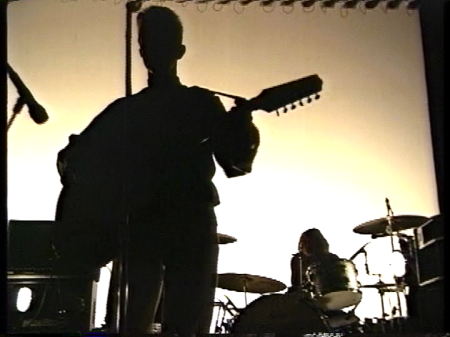 At one point Bowie said Tin Machine would also be a three-album project. Does that mean there’s only one more record to go?

“He said that this was a three-album thing,” Tony Sales says. “It will take three albums, possibly, for people to start to understand where we’re coming from.”

Said Bowie last year: “I think our intention is to stay together as long as all of us have the same enthusiasm that we have now. I think once it starts to feel like a job, I think that’s the last thing we want to feel.”

After months of sporadic rehearsals, warm-up gigs and occasionally baffling television appearances, Tin Machine began what would be its last tour in October 1991. It was a gradual trek westward, starting in Europe (Bowie took time off to propose to Iman in Paris), then going on to Britain in early November. At the last UK show, at the Brixton Academy, Bowie was struck in the eye by a pack of cigarettes that someone had hurled on stage, a preview of the even ghastlier eye injury he’d receive a decade later.

The Machine was in America by mid-November. As with the European shows, the band generally played clubs, including two of Connecticut’s finest: Toad’s Place and the Sting.* It was both a reaction to the arenas of the Sound + Vision tour and a blunt acceptance that Tin Machine generally couldn’t fill a 10,000-person hall. “There’s a fair amount of improvisation in terms of how we approach some songs. And that wouldn’t hold well in a large place—particularly at this stage,” Bowie said at the time. “First of all, the people don’t know the material at all. I don’t know how many people would be interested in coming to see a Tin Machine show in an arena. I’d imagine a lot might come along hoping I’d be doing old songs or something. We don’t want that feeling at all.”

On 20 December 1991, the band was in Seattle, playing the Paramount Theatre, for its final US gig. By then, “Smells Like Teen Spirit” had conquered MTV (and would peak at #6 on the Billboard Hot 100 the following month), Seattle was the center of a gold rush of record labels and promoters, and the Machine was irrelevant, yesterday’s insurrectionists, playing to a less-than-full house.

By then there were other tensions and fractures. The tour was getting middling to scathing reviews (Greg Kot, on the Chicago show: “there was nothing noble about a group of graying rock ‘n’ rollers collectively working through a midlife crisis on stage and then having people pay to watch it.”) And Bowie, who still didn’t have a solo record contract, was essentially funding the tour himself. “A small room packed with people is a cool thing, but it’s not economical,” he recalled to Kot in 2002. “I was paying for that band to work, and I was gradually going through all my bread, and it became time to stop. I had to build my audience back up again.”

And allegedly Hunt Sales was at low ebb, regularly using drugs (see “Sorry”), which soured the group’s camaraderie and made Bowie in particular agitated. “That really destroyed the band, more than anything else,” he later recalled. “It got to a situation where it was just intolerable. You didn’t know if the guy was going to be dead in the morning…We just couldn’t cope.”**

The Machine played a final leg, a short trip to Japan in January and early February 1992. The last song that they played at the Budokan, on 17 February 1992, was the first song that they’d recorded, “Heaven’s in Here,” which Bowie now infused with bits of Roxy Music’s “In Every Dream Home a Heartache” and Perry Como’s “Dream On, Little Dreamer.” There had been vague talk about cutting a third Tin Machine album, about going on another tour in a year or so, but Tokyo was the end, and they knew it.

So there’s a poignancy in Tony Sales’ version of “Go Now,” which he played throughout the tour. Tony Sales tends to be forgotten amidst the discussions of Hunt’s antics, Gabrels’ guitar playing and the various doings of their charismatic lead singer, but he was a fine bassist and R&B singer for whom Tin Machine was the payoff of a professional life of near-misses. It’s easy to imagine that he took the band’s demise the hardest.

“Go Now” was a hit for the Moody Blues in 1965, though it was also notable, in retrospect, for being another sign that American R&B was being supplanted by British copies (while it had been a minor R&B hit for Bessie Banks the year before, the Moodys’ version all but erased the original from common memory). A waltz built on a set of descending piano thirds, “Go Now” was built so sturdily that it could withstand a good deal of emoting, though it worked best when sung simply and moodily, as by Banks or Denny Laine. So it’s a shame the Machine yet again couldn’t resist overkill, as their performances of “Go Now” were often garish overextended affairs, the song flogged to the point of being unrecognizable. The song’s title proved too apt a target, with people in the audience occasionally yelling “yeah, go now!” back at Sales. It was a fittingly heartfelt, frustrating and chaotic close to Tin Machine, and here we’ll let the band lie in peace.

“Go Now” was performed throughout the “It’s My Life” tour.

An endnote on Oy Vey, Baby: This live album, issued in July 1992, is arguably the most unloved release in the entire Bowie catalog, having failed to chart in the US or the UK upon release. It’s currently out of print. Composed of tracks taken from the Chicago, Boston, New York, Tokyo and Sapporo gigs, it’s actually a decent live document of a band that, even as they were slowly disintegrating, was still putting on tight shows. “Amazing,” from Chicago, is better than the studio version; the Tokyo “Goodbye Mr. Ed” has Bowie in fine voice and Gabrels on form. The asinine title, a Hunt Sales jibe at the latest U2 album, didn’t help the record, nor did the inclusion of a 12-minute “Heaven’s in Here” and an eight-minute “Stateside.” The mix was mainly the work of Reeves Gabrels, who described it as “deconstructionist R&B,” and who later said it was his favorite Tin Machine album. The video release (also out of print) is a wholly different beast, being entirely taken from the 24 October 1991 show in Hamburg.

* As I was a teenager in Connecticut in the late Eighties, I’d regularly gone to these clubs. As fate would have it, I was living in Boston by the time the Machine came to them.

** This quote, the most open that Bowie ever got about the Sales situation, is found in both Nicholas Pegg’s book as well as Dave Thompson’s Hallo Spaceboy. In both cases, the interview it’s taken from is not cited and I could find no original print source for it. I’m assuming it’s from a TV/radio interview, most likely the BBC’s “Golden Years” radio doc from 2000.

Photos: video stills from one of the last Tin Machine shows, Tokyo, 5-6 February 1992.

This entry was posted on Monday, September 10th, 2012 at 11:32 am and is filed under Victory and Savage Years: 1990-1993. You can follow any responses to this entry through the RSS 2.0 feed. Both comments and pings are currently closed.