If Bowie’s work on Tin Machine II seems maddeningly uneven, with the likes of “Shopping for Girls” matched with dreck like “You Can’t Talk,” it was in part because making the record was a sideshow for him. At the same time, in the fall of 1989, Bowie was consumed with readying his past for show, planning an elaborate re-issue of his back catalog and a world tour that would serve as its epilogue.

In 1988, compact discs had outsold LPs for the first time1 and by late 1989 vinyl was all but kaput. But the first wave of catalog CDs, churned out simply to get albums into stores, were slipshod, tinny-sounding, with artwork which rivaled that of cassettes (cropped, blurred photos; often no lyric sheets). The first Beatles CDs, which at least standardized US-UK album sequences,2 were primitive if passable, but the majority of Sixties bands’ catalog CDs were dreadful: vastly inferior, sonically, to the LPs they were supplanting. These discs only sounded “good” because for many people the contrasting item was an old, scratched, finger-smudged LP.

Bowie’s catalog was scarcely available on CD. RCA had put out an initial run of discs that by 1987 had all but vanished, as the rights to the albums had reverted back to Bowie. Rather than dump another batch of cut-rate CDs into the market, Bowie envisioned a series of high-end reissues, for which he could charge a premium, rather than the reduced prices that catalog issues usually merited. Essentially, the plan was to market a record that many people already owned (say, Ziggy Stardust) as a new release. It was rock & roll entering its archival, collector’s edition phase, a gambit aided by a booming economy, a new shiny recording medium and a clever strategy like Bowie’s, which baited fans with the promise of, at long last, new old songs.

Bowie was inspired by Frank Zappa, who had used Rykodisc, an independent CD label based in Salem, Massachusetts, to issue his back catalog. Zappa had loaded the CDs with extras, and sometimes re-recorded old tracks (a path Bowie blessedly never followed). Bowie signed an agreement with Rykodisc in March 1989,3 allowing Ryko to selectively raid his vaults for potential extras (with Bowie retaining veto power). These outtakes, demos and live cuts, provisionally around 50 tracks, would be added to various reissues and as well as to a career-spanning boxed set that Ryko issued in September 1989 to kick off the series.

[A brief aside on Sound + Vision. I have a soft spot for it, as I received it for an Xmas present in ’89 and it served as a great entry into Bowieland. But it’s a frustrating compilation at times. Using the Stage version of “Station to Station” was inspired, but substituting “Helden” for “Heroes” was a bridge too far.]

The Sound + Vision plan was tripartite: unveil the boxed set; stagger-release the CDs (the last batch wouldn’t come out until 1992—above is the aluminum “Tech Unit” that Ryko issued as the official holding case for one’s complete Bowie reissues); go on a six-month tour that would be billed as the last time Bowie ever played the hits. For the latter, Bowie needed a lead guitarist who had stage presence, who was familiar with his back catalog and with whom he had a good camaraderie. At first, Bowie assumed he would use Reeves Gabrels.

Gabrels balked, in part because he thought doing the tour would’ve meant bad blood with the Sales brothers, who were definitely not invited. But Gabrels also instinctively knew that he was the wrong choice for the gig, as the audience for this tour wouldn’t tolerate any of his deconstructionist assaults on classic Bowie hits. So instead he recommended one of his inspirations: Adrian Belew. 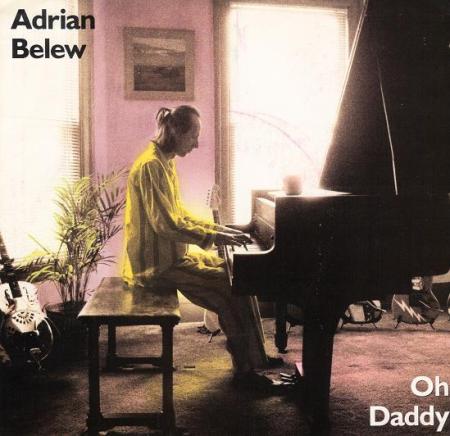 Belew had last worked with Bowie on Lodger. He had spun through the Eighties: as a counterpart and possible replacement for David Byrne in the Talking Heads (during a low period for band morale, Tina Weymouth and Chris Frantz asked Belew to consider taking over as lead singer/guitarist); playing “David Byrne” in a revived King Crimson; forming an indie band (the Bears); closing the decade with a solo record, Mr. Music Head, whose goofy father-daughter duet, “Oh Daddy,” was a modest hit.

Belew was sitting by a swimming pool with the band America (now there’s a story untold) when he got Bowie’s call. He was intrigued by the idea, and he and Bowie began mapping out plans for the tour, which songs to include, how to arrange them with a stripped-down band. But Belew also had a solo contract with Atlantic, and in late 1989 he was making Young Lions, the follow-up to Mr. Music Head. So becoming Bowie’s lead guitarist for much of 1990 would mean putting the promotion of his own album on hold. As a lure, Bowie offered to sing on and provide new songs for Belew’s album, which could be performed during his “greatest hits” concerts.

So Belew sent Bowie a few tracks he was working on. Bowie sent back a tape with a song that he had recorded as a studio demo in 1988, “Pretty Pink Rose.” This hailed from a session in Los Angeles produced by Bruce Fairbairn, and cut with Bryan Adams’ backing band (see “Heaven’s In Here”).4 Years later, Belew was unsparing as to what he thought of the demo:

David’s office sent a cassette. Excitedly I opened it and played it. “Oh gawd,” it was awful! Imagine how I felt. Here I was on the verge of touring for a year with David Bowie and thinking we might produce a duet of perhaps a “hit” song of David’s, only to be confronted with something which sounded lifeless, limp, and plodding. I didn’t know quite what to do.

So working alone at a studio in Wisconsin, Belew tried to salvage the song. First he jump-started the plodding rhythm track. Recalling an old Beatles trick in which Paul McCartney played what sounded like straight 4/4 while Ringo Starr played a shuffle (or vice versa), and so creating a “pulling” rhythmic sensation that felt like half-time, Belew used a sampled “growling” bass and played variations against it on a 1955 Ludwig drum set.

Then he tweaked with the song’s structure. He made a tongue-in-cheek grandiose intro out of a play on the chorus melody, a brooding quasi-classical synthesizer musing that’s suddenly upended by a wailing guitar. He replaced a keyboard ostinato that had run under the chorus vocal on Bowie’s demo with a double-tracked guitar line. For the verses, Belew found that the way Bowie’s vocal melody “sat” allowed for him to write a series of responses on guitar: this created an volleying dialogue between guitar and singer, an effect further heightened in the final mix when Bowie and Belew traded off vocals.

As for the guitar tracks, Belew said: I was using Stratocasters equipped with Kahler tremolos at the time. I discovered you could adjust the tip of the Kahler tremolo arm downward facing the strings and then play the strings using the tip itself. Like “tapping,” only using the tip of the tremolo arm instead of your right hand fingers. It was the perfect bit of “flash” I was looking for. And it just happened! I had never seen it done before (or since).”

The finished track shifted between 16-bar uptempo verses driven by propulsive rhythm guitar and moody choruses that sounded more like bridges and were well suited for a classic Bowie croon. It was punchy, full of hooks, a ready-made piece of guitar pop. Bowie, stunned that Belew had made a possible hit single out of a song that hadn’t been good enough for Tin Machine, wrote an inspired lyric in response.

Bowie and Belew cut their vocals in a raucous session in NYC in January 1990, just before Bowie unveiled the Sound + Vision tour. The original vocal intro, Bowie intoning “she had tits like melons…it was love in the rain,” was sadly discarded, but an uncorked joy remained in the final lyric, a gonzo kiss-off to the waning Cold War. She’s just been to Russia and they’re dying their faces, the song begins: capitalism gaudily triumphant at last, the funfair finally heading East, streaking across the broken borders. They’re dying over there, is the subsequent pun, which Bowie sings with a smirk. The video took the idea further: Bowie and Belew, two louche representatives of the West, cringe before and court Julie T. Wallace, cast as a dominatrix in traditional Russian garb.

And where Never Let Me Down and the Tin Machine records had their wearying share of heartbreaking, ball-breaking women, here Bowie made his obsession into a force of nature (Belew’s whinnying, goading guitar solos also seem like a parody of Gabrels at his most excessive; it’s a master mocking a pupil). She’s the poor man’s gold, she’s the anarchist crucible!, Bowie hollers. She upturns civilizations wherever she spins, tearing up Paris looking for Tom Paine, who’s slipped loose from the jails, heading for the Finland Station. For a moment around 1990, it seemed like the world could be reset, and the optimism of the time echoes in “Rose.” But in its second verse, Bowie growled out a premonition of what the next two decades really would hold: the left wing’s broken, the right’s insane.

“Pretty Pink Rose” is a brief taste of glam élan during Bowie’s bilious mid-life crisis. It’s also frustrating. Belew’s surgical repairs to the song showed that, in the hands of a musician with something at stake, Bowie’s sub-standard material could be restored to life. It makes one wonder how much of the banal music that Bowie released in the late Eighties had finer, if unborn incarnations. “Pretty Pink Rose” easily could have been a throwaway. Instead it was Bowie’s best single since “Absolute Beginners.”

Recorded at Royal Recorders in Lake Geneva, Wisconsin, on 11 November 1989, with vocals cut at Right Track Recording in NYC on 15 January 1990 (info via Belew’s website, from which I also took the history of “Rose”‘s restoration). You can purchase the instrumental version directly from Belew here. Released in May 1990 as Atlantic A7904, c/w “Heartbeat” (only #89 UK, though it hit #2 on US “Modern Rock” charts). There’s an alternate mix released on the promo CD single: it’s about thirty seconds shorter, has less lead guitar and even has a different second verse (I’ve not heard it). The video, filmed in a day at an abandoned German railway station, was never officially released.

1: The market leader until 1993 was the cassette, mainly because it was cheaper and cars didn’t have CD players yet. The transition happened earlier in the UK: by 1990, CDs had a greater market share than cassettes.

2: It’s nice that for everyone under, say, 35, Revolver has always had “I’m Only Sleeping” on it, Rubber Soul has always had “If I Needed Someone,” and Help! is where you find “I’ve Just Seen a Face” and “Yesterday.”

3: This was only for the US. Bowie finally struck a UK licensing agreement with EMI in 1990.

PS BUT HEY WAIT THERE ARE MORE TIN MACHINE SONGS. Yes, yes! As the last two TMII songs were recorded in 1991, we’ll get to them after these few Belew/Sound + Vision posts.

This entry was posted on Wednesday, August 15th, 2012 at 10:38 am and is filed under Victory and Savage Years: 1990-1993. You can follow any responses to this entry through the RSS 2.0 feed. Both comments and pings are currently closed.