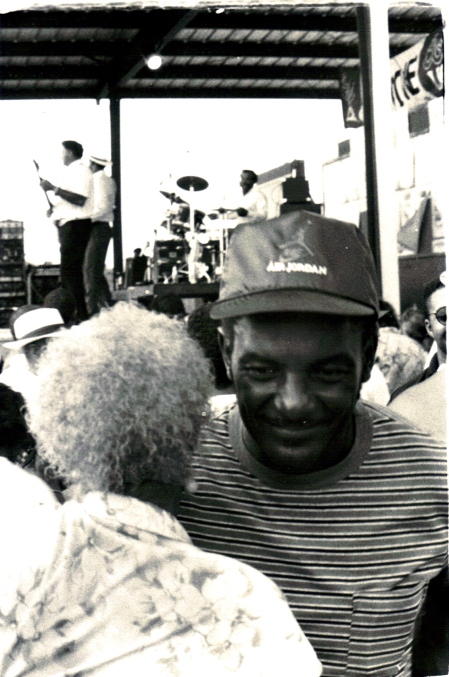 Slated for Tin Machine II until late in the day (it was replaced by a track cut in the March 1991 final sessions for the album, either by what proved to be the master take of “If There Is Something” or the newly-recorded “One Shot”), “It’s Tough” was then sunk into the memory hole, with no public trace of its existence until a few versions leaked in 2008. According to one source (recounted on the TW message board), Bowie played a rough mix of a provisional TMII to an Australian friend, who called “Tough” the weakest track, a verdict with which Reeves Gabrels allegedly concurred. So “Tough” was kicked off the album, knocked down to a proposed B-side and ultimately shelved.*

The Machine had spent time working “It’s Tough” into shape, hardening the “Lust for Life”-esque bassline, tweaking its intricate multi-guitar intro (while sounding like a synthesizer pattern, the intro’s base is more likely a rapidly-picked guitar, close to the opening of the Talking Heads’ “Burning Down the House”) and revising its structure: earlier versions had overused the “it’s tough! but! it’s okay!” refrain, while the apparent final take has an additional verse and a jabbing Bowie saxophone solo.

Bowie also scrapped some luridly violent lines (“someone driving a 4×4 threw acid on her face/she told the cops that she hacked him up/with the sharpened edge of his license plate“) in favor of a more obscure lyric that quotes Dean Martin at one point. While his earlier vocal had been more committed to malice, there was still a sharpness to Bowie’s observations, a spit in his delivery, that had been lacking in his work for over a decade: All the rats are winning…Squeezing out a generation/waiting for the next…So I lie! lie! lie! It’s the return of the Thin White Duke to a Los Angeles about to boil over in 1991. A repeated “I’m not ready for this” serves as a prayer and an excuse (& echoes a Mekons song from a few years before).

Listening the various bootleg versions of this track is an exercise in frustration, as any one of them have more kick and power than the lesser half of Tin Machine II. Cutting “It’s Tough” was a blunder, foreshadowing Bowie’s odd sequencing on Black Tie White Noise.

* The “final” version of “Tough” likely comes from a promo CD of Tin Machine II that was assembled before its last recording sessions (recall that Bowie was shopping around the TMII tapes for a year, looking for a label).

This entry was posted on Monday, August 6th, 2012 at 10:16 am and is filed under Victory and Savage Years: 1990-1993. You can follow any responses to this entry through the RSS 2.0 feed. Both comments and pings are currently closed.