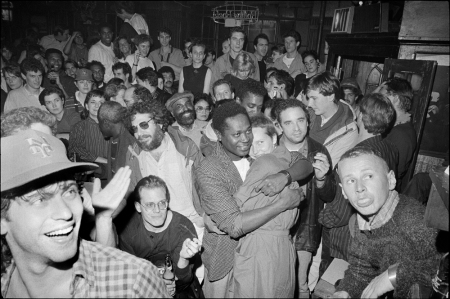 “New York’s In Love” is in contention for being Bowie’s most crapulent original composition. The lyric, built on a central metaphor that Bowie blends to mush—New York’s like a sexy yuppie lady! She’s clean but she’s dirty! Watch her strut her stuff!—is atrocious, with even the few decent scene-setting opening lines (“the clouds are stuck like candy floss“) grating when you know that in a 1987 interview, Bowie took Mark E. Smith to task for writing “fourth-form poetry.”* As for the yo-yoing vocal melody, Bowie could barely handle it in the studio—he’s audibly straining on “Go Go Boys” and “fam-i-ly” in the second verse—and the live version linked above documents some even more ragged singing.

In its weak defense, “New York” was likely one of the Never Let Me Down songs most intended as a big production number for the tour—hence its chorus, which is paced leisurely enough (nearly a bar between each vocal phrase) to allow time for dancers to move to their next positions, and whose melody, nearly the same phrase repeated nine times, asks little. (The chorus also has a modestly interesting progression, with a C major 9th chord challenging the song’s E major tonality.) Carmine Rojas’ tight, driving bassline is the only thing seemingly holding the track together at times, while the meat-handed guitar solos are Bowie’s own: it’s the “raw” sound Bowie had in mind when he assembled Tin Machine, though he hedged his bets by hiring a guitarist with chops.

Recorded ca. September-November 1986, Mountain Studios, Montreux and the Power Station, NYC. On Never Let Me Down (it’s extended for a murderous 30 more seconds on the CD) and performed during the Glass Spider tour.

* Bowie said the intention was to show “that real vain aspect of big cities. They’re so pompous and big and in love with themselves.” No comment. In this same lively interview, with Musician in August 1987, after dissing the Fall, Bowie also ridiculed the Jesus and Mary Chain, calling them “awful” and “sophomoric—like the Velvets without Lou.”

This entry was posted on Wednesday, March 7th, 2012 at 9:33 am and is filed under Never Let Me Down: 1987. You can follow any responses to this entry through the RSS 2.0 feed. Both comments and pings are currently closed.

37 Responses to New York’s In Love