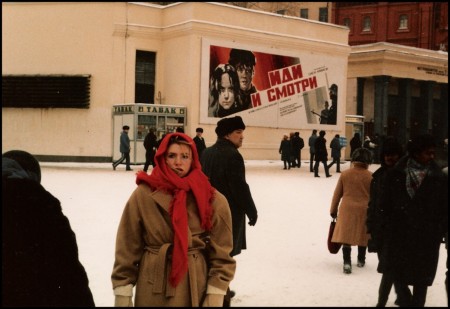 Labyrinth‘s climactic song is a brief piece of psychotic recitative with an unstable time signature (it’s shifting between 3/4, 4/4 and 6/4, though much of the first half is in free time); it lacks a melody and its refrain, if there is one, is a wailing three-line expiration. Who knows what Jim Henson made of “Within You” when he heard it, but he gamely built a sequence around it.

The scene: Sarah (Jennifer Connelly) finally reaches the heart of the Labyrinth, where she discovers an M.C. Escher-inspired three-dimensional set of stairwells. Sarah, like many bright teenagers in the Eighties, has Escher’s Relativity poster on her wall—it’s another clue that the entire Labyrinth world has been assembled out of her mind. Bowie confronts her—only now he’s apparently a hologram able to walk on walls—and she defeats his stratagem by choosing to sacrifice herself (or her potential adulthood) to save her brother.

But the histrionic “Within You” doesn’t really work here. The problem (as commenter Pinstripe Hourglass noted on “As the World Falls Down”) is that Labyrinth has consistently retreated into pretending it’s only a girl’s adventure story whenever it’s encountered signs of adolescent turmoil, so that Sarah and Jareth’s connection is based on a single scene, the ballroom hallucination sequence. Having Jareth act like a catastrophically devastated lover here seems off base. You could argue that he’s offering a variant of the alluring sexual fantasy of the “World Falls Down” scene, with Sarah here shown the operatic emotions of an imagined adulthood, the potential to be heartbroken so much that you can’t breathe. That said, Sarah spends most the sequence running up and down stairs to fetch her brother, as if she’s playing the last level of Dragon’s Lair.

“Within You” begins an octave-spanning bass-synth motif that Bowie’s opening phrases parallel, then there’s a quartet of higher-pitched, more desperate lines (e.g., “your EYES can be so CRUEL”, with Bowie peaking on a high G for each line) that lead to a collapse: the quasi-refrain that expires with the four-bar “I—I can’t live within you.” The portentous vocal and the chimes-of-doom synthesizers suggest that Bowie’s slightly mocking the high dramatics of his Berlin records—it’s like “Warszawa” reworked by a heartsick Goth.

Even by that standard, the arrangement is overkill, with four keyboardists (Brian Gascoigne , David Lawson, Robbie Buchanan and Simon Lloyd) apparently in a contest to see who could go most over the top—maybe Arif Mardin was offering a prize at the end of the session. The laurel should’ve gone to whoever did the synth arpeggios.

This entry was posted on Wednesday, January 25th, 2012 at 2:53 pm and is filed under Labyrinth OST: 1986. You can follow any responses to this entry through the RSS 2.0 feed. Both comments and pings are currently closed.

22 Responses to Within You