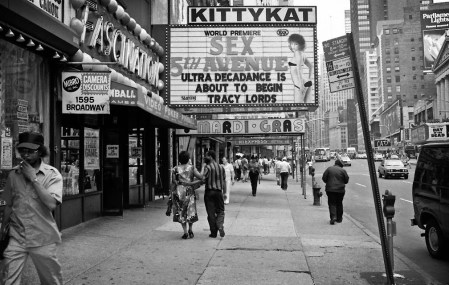 In the mid-Eighties Bowie transferred his allegiance from David Mallet, who had directed most of his iconic videos, to Julien Temple. Temple was slightly younger, flashier, more ambitious, and Bowie enjoyed his energy, the sense of being part of a movement that would invigorate British film, a New New Wave (it didn’t quite turn out that way). Bowie and Temple would hang out at Bar Italia, indulging each other’s nostalgia—Bowie’s, for Swinging London; Temple’s, for the punk summer of 1976.

So when Temple decided to bring Colin MacInnes’ Absolute Beginners to the screen, Bowie wanted part of it. MacInnes’ 1959 novel was a herald of the Sixties: in part a British response to Catcher in the Rye, it was one of the first celebrations of the teenager. MacInnes was an odd prophet of the youth explosion, as he was 45 when he wrote the novel (part of a loose trilogy that also included City of Spades and Mr. Love and Justice). But he had been a determined outsider all of his life, a bisexual whose allegiances lay with society’s misfits and outcasts. The Absolute Beginners trilogy is an ode to immigrant London, with MacInnes regarding African and West Indian immigrants as Britain’s saviors, the New Britons with style and soul. At the end of Absolute Beginners, the narrator, ready to emigrate in disillusionment, is stopped in his tracks by seeing a group of African immigrants disembarking an airplane. (“I shouted out above the engines, ‘Welcome to London! Greetings from England! Meet your first teenager!”)

But MacInnes had fallen into the same hole as Norman Mailer, prizing Africans and West Indians for their “realness,” and abstracting them in his own way as much as any bigot. For example, here’s his “A Short Guide for Jumbles (to the Life of their Coloured Brethren in England)” (1956): Do Africans not like us then? Not very much, because our outstanding characteristics of reliability and calm don’t touch them, and we lack the spontaneity and sociability they prize.” By contrast, white Britain was “The ‘Express’ Families” of MacInnes’ 1960 essay: “sexless sparrows in their suburban love-nest…outside their world of consecrated mediocrity, nothing exists whatsoever.”

Temple’s adaptation could have made much of this, viewing this condescending utopian dream of an alliance between blacks and British hipsters from the perspective of a post-Brixton London, but instead he downplayed that aspect of the novel, even as a satire. While climaxing the film with a West Side Story version of the Notting Hill race riots of 1958 (complete with a new Jerry Dammers track), Temple’s interests lay more in showing the scaffolding of Modernity Britain being assembled.

Bowie, asked by Temple to do a theme song for his adaptation, offered to play a role as well, and wound up as Vendice Partners, a Satanic ad man with a wavering American accent.* Bowie’s Partners is the distillation of his time: Vespa scooters, E-type Jaguars, streamlined Italian suits (as Bowie’s biographer Christopher Sandford noted, it was “poignantly, the world of Terry Burns,” Bowie’s elder half-brother, who had killed himself in early 1985). Partners was also Bowie’s long-stewed revenge on the ad industry, in which he had dabbled as a teenager to support himself, and a winking acknowledgment that youth culture had been compromised, sold out and repackaged while it was still in the cradle.

What was intended as a small-scale genre picture, a witty tribute to the dawn of the Sixties by its veterans (Ray Davies also has a minor role, singing his best song of the Eighties), instead became the center of colossal expectations. Absolute Beginners would save the ailing British film industry, it would launch a new generation of stars (Temple’s lead actress was the 17-year-old Patsy Kensit, who had recently been quoted saying “all I want is to be more famous than anything or anyone'”), it would revive the musical, it would make millions, it would be revolutionary. Naturally, the UK press hated it before primary shooting was completed. Partly intended as a critique of Thatcherism, the film’s aspirational feel, its rapidly-ballooning budget, its overinflated expectations and its flash barely masking a shoddiness, marked it instead as a pure product of its time.

The film also seemed cursed. London’s rain-plagued summer of 1985 meant that location shots had to keep being postponed. A set caught fire. Most of the cast took ill, some with pneumonia. When Absolute Beginners finally premiered in March 1986, it had been debated, belittled and gossiped about for so long that its actual debut seemed like old news. The film was reviewed modestly, sold modestly, and faded away. As Nicholas Pegg wrote, “it’s still regarded today as some sort of grand folly, often by people who’ve never seen it.” 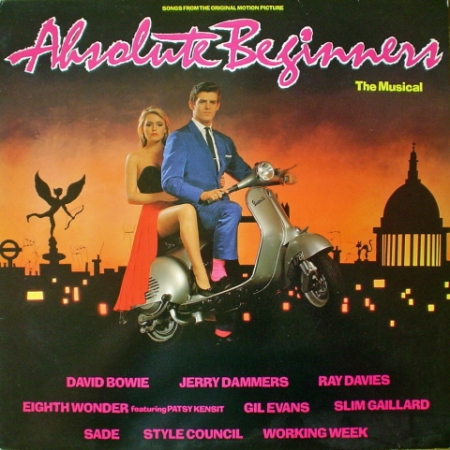 “That’s Motivation” was the first song that Bowie wrote for the film, and it would serve as his character’s major set piece. It’s a seduction song, with Partners corrupting the teenage Colin with a philosophy summed up in Alan Sinfield’s comment on MacInnes’ novel: “If you listen to jazz, dress snappily and stay cool, then the rest of it needn’t bother you.”

That said, “Motivation” is a pretty weak song, its horn-driven beat a melange of Irving Berlin’s “Heat Wave” and “The Name Game,” while Bowie’s lyric throws in Sixties references (Far From the Madding Crowd) and recently-used creaky imagery (the bloody skies of “This Is Not America” are back). The need to extend the song to fit in assorted set pieces (the dance on the giant typewriter (inspired by Ready, Willing and Able), the Great Dictator-referencing globe scene, the tap-dancing on TV, the Seven Deadly Sins count-down**) means that “Motivation” feels like it goes on forever, especially when it’s stuck in one of its nearly amelodic bridges. Still, the studio band assembled for the soundtrack are sharp (including Elvis Costello’s pianist Steve Nieve) and the song does what it needs to do—it’s a secondary color for an overly ambitious film sequence.

* A deliberate move by Bowie, and one reflecting MacInnes’ essay “Young English, Half English” (1957), about Tommy Steele: “[when Steele] speaks to his admirers between the songs, his voice takes on the flat, wise, dryly comical tones of purest Bermondsey. When he sings, the words (where intelligible) are intoned in the shrill international American-style drone.”

**A pedantic footnote. Bowie’s recounting of the Seven Deadly Sins mistakenly uses jealousy instead of envy, but there’s a subtle difference between the two.

This entry was posted on Thursday, January 5th, 2012 at 12:25 pm and is filed under EMI Years: 1983-1990. You can follow any responses to this entry through the RSS 2.0 feed. Both comments and pings are currently closed.