“Loving the Alien” is a deliberate “Bowie masterpiece” that aims for the heights of “Station to Station” and “Heroes” and misses. “Alien” obviously meant a great deal to its composer, as he worked to hone the song throughout the Tonight sessions, he led off the record with it, he spent a chunk of his most substantive interview in 1984 trying to make sense of it and he later refitted the song with a simpler arrangement that better suited it. But in all of its incarnations “Alien” seems ultimately a failed promise: it yearns to be more substantial than it is.

On the album, the sheen of the track’s production and its somnolent tempo smothered the song, but “Alien” also had some fundamental flaws that its later, tasteful arrangements couldn’t disguise, either. As a song it doesn’t quite hold together: it feels padded and its joins are shaky, while its frustrating lyric ranges from banality to brilliance in the course of a line.

“Alien” began as a full-band demo that Bowie cut in Switzerland before the Tonight sessions. Known as “Demo No. 1,” cutting a releasable version of it became a focal point of the Tonight sessions. Bowie realized that “Alien,” obviously one of the better-quality pieces on the album, would have to serve double duty—not only the Epic Bowie Song of the record (“Ricochet” had this role last time around), it also had to be a potential single. So the version of “Alien” that wound up on Tonight is, in its somber way, compromised. It can seem like a down-tempo remake of “Let’s Dance” in places—Carmine Rojas’ near-identical descending bass hook is there, and the guitar solo that closes out the track sounds like an outtake from Stevie Ray Vaughan’s work.

Bowie wrote the song out of anger, he said. He had worn a crucifix since his chaotic days in Los Angeles and had come to believe the cross held some beneficial power over him—not as a religious symbol (Bowie wasn’t a Christian except in the nominal sense) but as a good-luck charm, a tangible piece of white magic. Musing on this, he began to piece together a vague theory on religion: that much of it, from Judaism to Islam, had been built on a consecutive series of mistranslations.

“Loving the Alien” is Bowie’s last Los Angeles song, as he later admitted. Its lyric is a pulp of a variety of crackpot religious “hidden history” books popular in the Seventies and Eighties—Hugh Schonfield’s The Passover Plot, Baigent, Leigh and Lincoln’s Holy Blood, Holy Grail and, most of all, Donovan Joyce’s The Jesus Scroll, which Bowie mentioned in his interview with Shaar Murray. The common thread of these books (from which Dan Brown cherry-picked conspiracies for his Da Vinci Code) is that the official Christian Gospel is a lie, with Jesus Christ having not died on the cross but having fake-engineered his own death for political reasons (Schonfield) or having lived in obscurity until 80, dying a forgotten mortal (Joyce), his descendents still around today (Baigent –> Brown).

One of Bowie’s consistent themes, from the start of his mature work, was the allure and abuses of power. So he took from this jumble of religious hearsay the idea of a Church holding dominion over the dreams and desires of countless generations of human beings, despite its teachings being at heart false, or based on botched translations. For Bowie, the Church is the ultimate Saviour Machine, having the same contempt for the people that it’s allegedly serving (remember that Bowie’s super-computer in that song was called “The Prayer”).

The existence of extra-terrestrial intelligences would have a profound impact on religion, shattering completely the traditional perspective on God’s relationship with man. The difficulties are particularly acute for Christianity, which postulates that Jesus Christ was God incarnate whose mission was to provide salvation for man on Earth. The prospect of a host of “alien Christs” systematically visiting every planet in the physical form of the local creatures has a rather absurd aspect. Yet otherwise how are the aliens to be saved?

“Loving the Alien” “had to do with Major Tom,” Carlos Alomar once told David Buckley. This was an error—the lyric has nothing in it to suggest a follow-up to “Space Oddity,” and there’s no evidence that Bowie had intended “Alien” to fall in the sequence after “Ashes to Ashes.” But Alomar hit home indirectly, as “Alien” does seem like an apocryphal sequel to “Space Oddity,” in which a transformed man (a Major Tom come home) is misinterpreted as a savior, Bowie drawing on various cod-mythic histories in which Jesus Christ was said to literally be an alien being worshiped by an ignorant population—a Starman waiting in the sky.

Bowie sets his lyric in the Holy Land, with Crusaders and Saracens, and their counterparts in Israel/Palestine a millennium later, battling to hold a place that may not have been holy at all (in the Murray interview, Bowie also said he was reading a “historian” who claimed that Ancient Israel was actually in today’s Saudi Arabia—I couldn’t determine who he was talking about). If the verses are a jumbled historical narrative, actors caught up in an endless cycle, time folding into itself, the chorus offers escape: salvation by collective delusion. But if you pray, all your sins are hooked upon the sky, Bowie sings, in his best line of the song. Pray away your enemies, pray away your sins, by loving something you don’t understand, even something false, he sings. Then again, prayers sometimes work. Bowie didn’t get rid of his crucifix, after all.

Bowie had always had a soft spot for conspiracies and wild, speculative cod-histories, with “Quicksand” and “Station to Station” being compendiums of the strands of thought that the books had generated in his mind. But the strength, the uncanny power, of those earlier songs is their interiority—they are more dream journals and stream-of-consciousness fictions than they are any valid speculations on life. They are, in their gnomic ways, true, because everything is true in the mind.

Where “Alien” goes astray is its attempt to impose this sort of dream-speculative scheme upon a real, bloody political situation, especially in its weak second verse—the Middle East of 1984, with the Lebanese Civil War raging and the First Intifada only a few years away. Doing so brings Bowie’s muddled thoughts out into the sharp air, where they expire—his speculations seem trite, his viewpoint that a privileged, rich man idly wondering why people act the way they do, with the abstracted air of someone watching the convulsions of an anthill. The sympathies he has in the chorus, the way Bowie joins with the desire for prayer and release, removes some of this coldness, but there’s still a slight condescension in it. 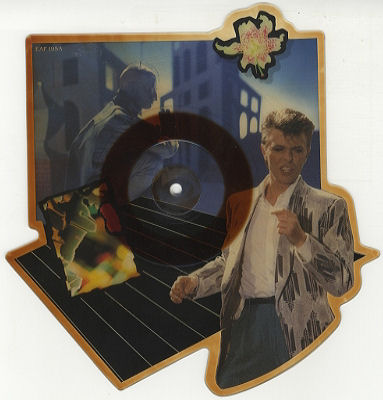 It’s a fortunate thing in music that so much of the subconscious comes through with the melody and the placement of a particular word on a particular note. For better or for worse, the information is inherent in the song, not in the writer or his intentions or even in the lyrics. It’s probably my strongest point that I write evocatively in terms of musical and verbal expression.

“Loving the Alien” was intended as an epic, so it opens with an extended 20-bar intro sequence broken into three stages—an assembling of players, then a brief vocal hook of repeating “ah ah ah”s—inspired by Philip Glass’ Einstein on the Beach via Laurie Anderson’s “O Superman,” a song Bowie covered on stage a decade later.* Then Guy St. Onge plays the opening riff on marimba (a bit suggestive of the Psychedelic Furs’ “Love My Way,” from two years before), and the song coalesces with Alomar’s arpeggios set against Rojas’ bassline.

After two albums of fairly basic chord progressions, here Bowie offers a murky one worthy of Space Oddity. “Alien” has an indeterminate key. While the sheet music sets it in G major, its tonality is much vaguer—the verse fits in with G major (Bm/D/Cmaj7/D6, which is III-V-IVmaj7-V6 in G), but the chorus ranges far outside that key, with the arrival of a B-flat, a C minor and an F minor 7th, all of which suggest a move to C minor. The change fits Bowie’s lyrical shift from “earth” in the verses to “heaven” in the choruses.

Bowie’s vocal is also crafted well, with his verse lines often starting with hopeful slight ascents and then descending whenever he hits a piece of reality, a Saracen or a telegram. Or take the way he slightly lowers the high note with each repetition of “pray” or “prayer” in the chorus, as if dialing down expectations—the initial “if you PRAY” has Bowie hitting a high G (the dominant note in the C minor chord the band is playing), the subsequent “PRAY and the heathen” falls to a natural F, and “PRAYERS they hide” falls to an E. And he sings his lines well and passionately, ripping his voice on “SKY.”

But there’s a real strain in “Alien’s” construction at times: take the brutal way the pre-chorus is dragged to the chorus, with three bars of upward jolts in quintuplets. Or how the extended coda sequence, which drags on for two minutes, goes nowhere at all, just recycling the intro sequence and eventually throwing in an uninspired guitar solo.

Of course, there’s much to admire in “Alien”: it’s cryptic in the best Bowie way, and it sounds good, with Arif Mardin’s strings tasteful by the standards of Tonight, and the vocal chorus, usually a catastrophic force on the record, is put to fine use here, with the choir-sounding backing vocals. But there’s something off about “Alien”: there’s a sense of misfiring, of the song pushing for a grandiosity it doesn’t quite earn. It’s a magician not quite pulling off an old trick, though believing that the cards are still speaking to him.

Recorded May 1984, Le Studio, Morin-Heights, Quebec. Released as a single in May 1985 (EA 195, #19 UK)—its video, with its mix of surreal imagery (the backing band out of de Chirico paintings) and Eighties cheese (Bowie’s outfit and ur-Rick Astley dancing) sums up the song’s muddled impact. Performed during the Glass Spider tour and, in a somber reincarnation, in some of the Reality Tour shows.

* While Bowie took pains to dismiss “O Superman”‘s influence on “Alien,” saying that Glass was the only inspiration, this seems a bit too Anxiety of Influence, as “Superman” has obvious lyrical affinities with “Alien” and plays with the same themes of faith and power. Anderson’s opening lyrics (“O Superman, O Judge, O Mom and Dad”) are her play on Le Cid’s aria “O Souverain, O Juge, O Pere.” “In the opera, these words are uttered as a prayer of resignation, the hero putting his fate in God’s hands. In the Anderson song, the three O’s change meaning. First, she prays to Superman (Truth! Justice! The American Way!) but by the end she longs for Mom and Dad.” (Isaac Butler, “Here Come the Planes.”).

This entry was posted on Wednesday, December 14th, 2011 at 11:33 am and is filed under Tonight: 1984. You can follow any responses to this entry through the RSS 2.0 feed. Both comments and pings are currently closed.

32 Responses to Loving the Alien