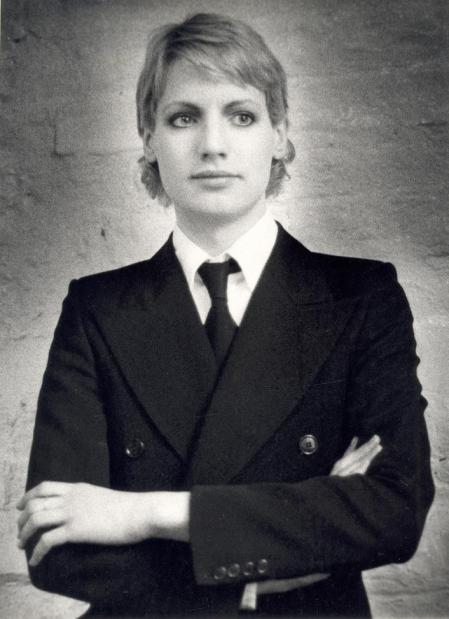 “Boys Keep Swinging” is Bowie taking on the Village People, with an irony far beyond the double-entendres of “YMCA” or “In the Navy.” There’s never a knowing aside, never a line sung with a wink: Bowie sells his pitch in his “Golden Years” croon, with a joyful bellow on “luck just kissed you HELLO!” while he gives the crude line “life is a pop of the cherry” some grandeur.

The whole piece is dedicated to camaraderie, with the backing singers taking over on the refrains as Bowie’s vocal sinks into the bassline, while the lead and supporting voices collide on a line like “you’ll get your share!” Bowie’s tone is beyond detachment or parody: the lyric and performance could be an extraterrestrial’s baffled report on human gender roles. If you are a male of the species you can wear a uniform! You can buy a home of your own!

Yet “Boys” isn’t really that far apart from “In the Navy,” with its lustily-chanted chorus, its barely-hidden gay anthemic qualities, its goofy delight in the cartoon masculine. It calls back to Bowie’s early “childhood” songs (“Uncle Arthur,” “When I’m Five”) in that the lyric’s perspective seems like a boy’s cracked idea of what manhood is, with lines suggesting adulthood is like joining a Scout troop: Uncage the colors! Unfurl the flag! From there it’s an easy path to another of the song’s buried themes, which is that traditional “manhood” can resemble a fascist cult, while a dedication to the ultra-masculine echoes an obsession with “feminine” pursuits like fashion (Bowie would go further with this in “Fashion,” where being in vogue is akin to goose-stepping).*

As with “Look Back In Anger,” there’s a sense of Bowie recrossing old ground here. The “Berlin” records are relatively chaste—love and sex, when they appear at all, are compromised, violent, alienated acts. There’s nothing with the swagger of “Suffragette City” or “Queen Bitch” on the Berlin albums, certainly nothing as salacious as “John, I’m Only Dancing.” Suddenly, in the last hours of the Eno partnership, Bowie returned to the spirit of glam, though lacing it with a harsher irony than before (“Rebel Rebel,” by contrast, has an open spirit that’s missing here) and inventing the New Romantics in the process. (Bowie decision to finally release his disco remake of “John” in late 1979 may have been inspired by the success of “Boys.”)

In David Mallet’s promo film for “Boys,” Bowie appeared in drag as his three backing singers. His rubbing-the-lipstick-off gesture was a steal from Romy Haag: it was a classic finale move by drag queens (Bowie loved the “anarchic” feel of destroying makeup that had taken hours to apply). Bowie’s mimetic talent, his ability to create a character in a few gestures, are amazing in this video, as each of his three women is distinct: the brassy Sixties belter; the faded, elegant dowager (modeled on his former co-star Marlene Dietrich); and his skeletal high society vampire. The latter is especially frightening; when Bowie rips off his Rebekah Brooks wig, he looks like a demon.

“Boys Keep Swinging” was one of the last songs completed for Lodger. It had a hard birth, though Adrian Belew recalled Bowie coming up with the lyric and vocal in a week during the overdub sessions.

During early takes of the rhythm track, Bowie, frustrated by what he called a “too professional” sound (Bowie wanted to sound like “young kids in the basement [were] just discovering their instruments,” Carlos Alomar said), was inspired by one of Eno’s Oblique Strategies cards (“Use Unqualified People”) and had the band switch instruments, a trick used during Lust For Life (“Fall in Love With Me”). Alomar competently played drums and Dennis Davis not-so-competently played bass, requiring Tony Visconti to redo the bassline during mixing. Visconti used the opportunity to play a hyperactive line that echoed his work on The Man Who Sold the World (it’s possibly inspired by the main riff of the Beach Boys’ “You’re So Good To Me.”). It became one of the track’s main hooks. George Murray was assigned to keyboards but was apparently erased from the final track, as he’s not credited on the LP sleeve.

“Boys” is the same chord progression as “Fantastic Voyage,”** and while at a far brisker tempo, its structure is basically the same as “Voyage”—two verses and two choruses, the latter extended while stalling, harmonically, on the A chord (starting with “we’ll get by I suppose” in “Voyage” and the last “when you’re a boy” in “Boys”). The drone in the background, led by Simon House’s violin, is, yet again, an echo of “Waiting For the Man,” here by way of “Heroes.”

Its lyric wrapped up early on, “Boys” cedes its remaining 90 seconds to a gonzo Adrian Belew guitar solo, again compiled by Visconti and Bowie from various takes (the only clue Belew was given about the song was that Alomar was playing drums). Belew recalled Bowie buttering him up during the session, saying that “Boys Keep Swinging” had wound up being a homage to Belew, as he was boyish and was a “world-is-your-oyster kind of guy,” Belew recalled in an interview with David Buckley. It’s Belew’s most inspired performance on the record, so flattery works.

Recorded September 1978 at Mountain Studios, Montreux, and March 1979 at the Record Plant, NYC. Released as a single (RCA BOW 2 c/w “Fantastic Voyage,” #7, UK) in April 1979. Covered by the Associates in 1980 and Susanna Hoffs a decade later. Blur ripped “Boys” off so much on “M.O.R.” that they were forced to credit Bowie and Eno as co-songwriters.

* The chorus has a taste of the Shirelles’ “Boys,” whose cover by the Beatles is an inadvertent early gender-challenging song, with the affable croaker Ringo singing blissfully: “I’m talkin’ ’bout boys! Yeah yeah boys! What a bundle of joy!”

** Visconti has said there was a third song using this progression cut during the Lodger sessions, but it was scrapped. According to the sheet music, the two Lodger songs don’t quite have the same progression—in the verses, “Boys” has a Bb where “Voyage” has a G minor.

This entry was posted on Wednesday, July 27th, 2011 at 9:26 am and is filed under Lodger: 1979. You can follow any responses to this entry through the RSS 2.0 feed. Both comments and pings are currently closed.