Fall in Love With Me 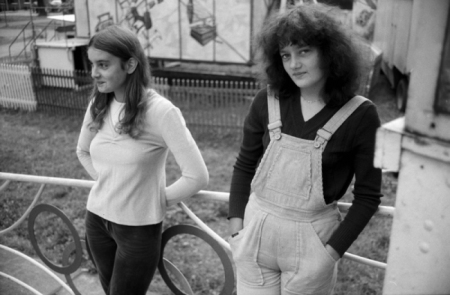 During a lull in the Lust for Life sessions, the players swapped roles for a laugh. Ricky Gardiner sat behind the drum kit, Hunt Sales took his brother’s bass and Tony Sales played guitar. They jammed for a while, fell into a shambling groove. Carlos Alomar came in on lead guitar, while Bowie, on organ, played yet another variation of his “Laughing Gnome”/”Speed of Life” descending riff. Iggy Pop went into the booth and free-associated a lyric. Edited down to six minutes and change, the jam became the album closer.

Sure, “Fall in Love With Me” falls in the minor rock & roll tradition of padding out an LP with an extended studio jam or mashing a few half-written songs into a closer medley. It’s a throwaway performance, but the record would be weaker without its welcoming groove, its sense of earned ease. Pop’s lyric is alternately goofy (“a table made of wood,” sung blankly as if it’s an odd thing to find), cutting (“you’re younger than you look”) and touching (“when you’re tumbling down, you just look finer”). It’s addressed to the same girl as in “China Girl” or “Baby” or “Sixteen” or “Tiny Girls,” it’s always the same girl, for Iggy—young, pure, yet somehow broken. What’s missing here is the obsessiveness; “Fall in Love” is an open-ended seduction.*

And for an album filler “Fall in Love” was influential enough. Bowie, noting how Pop could improv a vocal on the mike, how the musicians could shake out a song seemingly on a whim, rethought how to make a record. He would go beyond the experiments of Low: no more demos, no more neatly written-out lyrics, no more arrangements. During the summer of 1977, in Hansa Studios, Bowie went out on the wire.

Some unions end in recrimination and slander, others just wither. The great creative partnership of Pop and Bowie ends here, as well as it could have, with a vamp cooked up over a long afternoon in West Berlin. It’s loose talk over beers, tall tales, gibes, idle confessions, shot glass epiphanies. Then someone looks at the clock, a few excuses and goodbyes are exchanged, and the party breaks up.

* Julian Casablancas owes his career to this and a few other Pop vocals on Lust.

This entry was posted on Thursday, April 14th, 2011 at 9:39 am and is filed under Lust For Life: 1977. You can follow any responses to this entry through the RSS 2.0 feed. Both comments and pings are currently closed.

20 Responses to Fall in Love With Me