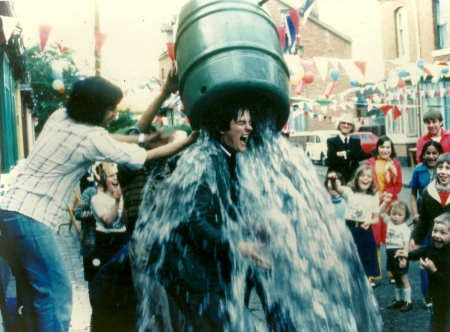 On paper, The Idiot and Lust For Life seem almost identical—both produced and performed by Bowie and Iggy Pop, with nearly all songs co-compositions. Yet Lust For Life is far more Pop’s record, with Bowie seemingly relegated to a supporting role (as during the spring 1977 Idiot tour, where Bowie just played keyboards and sang backup).

If Bowie seems a lesser presence on Lust for Life, it’s not for want of effort. The album sessions were a creative war between Bowie and Pop, with Bowie losing more of the battles. Bowie had written much of the music beforehand and had demoed it on cassettes, but Pop, coming off a triumphant tour and far more confident than he had been during The Idiot sessions, had grown irritated by Bowie’s control-freak tendencies—Bowie had kept the master tapes of The Idiot, and had pushed RCA to issue Low two months before it (so critics assumed Pop’s record was responding to Low, and not (as it was in truth) the other way around).

So making Lust For Life, Pop often rejected Bowie’s original arrangements and vocal melodies (see “Success”), instead pushing the band to put together something from scratch. Pop also had allies in the studio this time, as Bowie’s regular right-hand-man Carlos Alomar was matched by the second coming of the Stooges for a rhythm section: the brothers Hunt and Tony Sales.

The band (along with the lead guitarist Ricky Gardiner, who had come up with the riff for “The Passenger” during a springtime walk in the countryside) was hardened during the manic cross-Atlantic Idiot tour (29 shows in six weeks). Iggy’s set consisted of Stooges classics, a handful of songs from the album he was allegedly promoting (“Sister Midnight,” “China Girl” and “Funtime”) and three new, unrecorded numbers. At the two Rainbow Theatre shows in London, the punk vanguard paid homage to a godfather—milling backstage were Johnny Rotten, Brian James of the Damned, Howard Devoto (who gave Pop a copy of the Buzzcocks’ Spiral Scratch, saying “I have all of your records, now you have all of mine”), the Adverts, Billy Idol and Johnny Thunders, who worried that Bowie was making Pop “go cabaret.”

Pop hadn’t been on stage since October 1974, and the tour was his first-ever billing as a solo artist. He had something to prove, had a crack band and so kept a brutal pace, with the detox work Bowie and Pop had done in 1976 going by the board (“the drug use was unbelievable and I knew it was killing me,” Bowie said in 1993). After a brief recuperation in Los Angeles, Pop returned to Berlin, rented an apartment in the Tempelhof-Schöneberg district and in June 1977* made Lust for Life at Hansa Tonstudio 3.

“Turn Blue,” regularly played during the Idiot tour, is the oldest song on the record, a remnant from Pop and Bowie’s first disastrous attempt to record together in Los Angeles in May 1975. Originally called “Moving On” (co-written with Bowie’s old friend Geoff MacCormack**), it was revived for the 1977 tour, with the lyric greatly reworked by Pop and the LA-based artist Walter Lacey.

The rambling lyric is essentially Iggy Pop free-styling at the mic, with Bowie coming in afterward with vocal overdubs to sweeten things out and add structure to the song. (That said, Pop’s not improvising the lyric in the studio, as he had sung “Turn Blue” much the same way on stage months before). Over a seven-minute vamp, Pop rants, murmurs, squeaks, cries, gives comic asides (“Jesus? This is Iggy”); he gets snagged on lines and beats himself against them (“I shot myself down!” “They’re stepping on our hearts!” “BLACK!! STRONG!!” “Don’t forget me!”). It ends with the singer either shooting himself or shooting up: maybe it’s both.

Lust For Life is in part Pop channeling Jim Morrison—“The Passenger” was inspired by a Morrison poem, and “Fall In Love With Me” seems to be summoning his ghost—and there’s a taste of Morrison’s unhinged cod-poetic ramblings in “Turn Blue,” though Iggy’s weird, belligerent, pure Id of a vocal, the goofy intensity of his performance, makes what could have been a tortuous album-filler track into a piece of deranged performance art. When Bowie comes in on harmonies, the track even seems like a dark parody of the extended soul ballads from the Young Americans sessions.

* Most early Bowie chronologies place the Lust For Life sessions in either April or May 1977. But Paul Trynka turned up records by Eduard Meyer at Hansa noting that some of the Lust sessions occurred on 8-12 and 14 June 1977. Most musicians involved recall that the album was cut in one go, in about 10 days, so a logical surmise is that Lust for Life was recorded ca. 4-20 June 1977.

** MacCormack, then known as “Warren Peace,” was Bowie’s closest friend, traveling companion and occasional collaborator (“Rock and Roll With Me”) from 1973 to 1976. MacCormack dropped out of the picture around the time of Low and little more was heard of him publicly (Pop said the split was because MacCormack “had become more Hollywood than was great for [MacCormack and Bowie’s] relationship,” though they seem to have patched up at some point in the ’80s). As for Lacey, the only other reference I could find of him was performing a spoken-word piece in 1982 called “Meatpack Man.”

This entry was posted on Thursday, March 24th, 2011 at 9:44 am and is filed under Lust For Life: 1977. You can follow any responses to this entry through the RSS 2.0 feed. Both comments and pings are currently closed.