It began when Iggy Pop and David Bowie were drunk one summer night. “Politely drunk, after-dinner drunk,” Pop recalled. One glass of wine too many. The two stumbled into a room at the Château d’Hérouville, the haunted Val-d’Oise castle in which they were making Pop’s record. Pop sat down behind a child’s drum kit and Bowie at a toy piano. They started playing, hit upon a groove, got it on tape; they called the piece—barely a riff—“Borderline.”

Pop kept the tape, tried to craft a lyric. He was having an affair at the time with another guest at the castle, Kuelan Nguyen, the girlfriend of a French actor/singer, Jacques Higelin. Nguyen spoke no English, Pop no French, so the two communicated in gestures, expressions and pidgin reductions of each other’s language. Pop would grow frustrated trying to get through to Nguyen in sign language and brutalized French; she once put a finger to her lips and shushed him.

Pop spent days working out the vocal (he would improvise much of the final lyric while standing at the mike, Bowie recalled). As with “Dum Dum Boys,” Pop was working in a pop tradition: here, a song with language as an obstacle hindering lovers, like the Beatles’ “Michelle” or Chuck Berry’s “La Juanda,” where Berry asks a Mexican girl to dance, but neither understands the other (or pretend not to—she may be a prostitute, he may be negotiating).

Yet in “China Girl” broken communication is besides the point; it’s what happens when the two manage to connect that ruins the singer. Pop was using stereotypes older than Victoria, casting “Nguyen” as the mysterious, sensual Orient and himself (“Jimmy”) as an unwilling agent of the corrupt West. In the song, there’s a decline from natural elements—the falling stars, or heartbeats as “loud as thunder,” which Pop sings softly and slowly, letting space in between each note—in the first verses to the modern effluence in the bridge and final verses: Marlon Brando1, swastikas (another Eastern symbol perverted by the West), television, cosmetics, even juice boxes (see Bowie’s video). 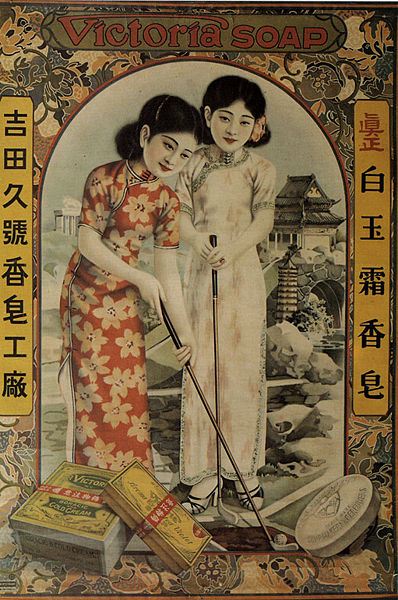 “I’ll ruin everything you are,” Pop sings. Yet he can’t avoid doing so—his passion’s too addicting and consuming—and it’s not clear what’s he ruining. He’s more in love with his own depiction of her than whatever reality she offers; he’s the man who fears he’s poisoning his dreams, and spends his days raking through half-memories of them for impurities. The wordplay of the title line—with “china” also being pure heroin, as well as being a reference to the girl’s fragility (though she seems far more together than Iggy is)—muddies things further, and a widening of the lens finds Pop playing on the West’s views of China itself (a stand-in for “the East,” as Nguyen was Vietnamese): a mirror reflecting its own flaws, a canvas on which it can project its own fantasies2.

As with many of The Idiot‘s tracks, “China Girl”‘s vocal, a twisted nerve of a performance, is set against a dense, distortion-filled musical backdrop, and it’s the variable element in a circular, minimal song structure—the song’s mainly built on a trio of repeating 4-bar chord progressions, and sometimes the chords (G6, E minor and Em7) are the same set of notes, just arranged in different sequences. The track erupts more than it starts, with Pop suddenly lurching into view a beat into the song, his singing drenched in distortion and submerged in the mix as if it was one of Phil Palmer’s guitar overdubs. Pop’s voice finally becomes distinct at the moment he goes mad: I stumble into town, just like a sacred cow (yet another Eastern holy object debased), building to the scream on “it’s in the whites of my eyes!” which blows out the mike preamp.

Over Laurent Thibault and Michel Santangeli’s bass and drums tracks, Bowie and Pop overlaid stabs of Palmer’s guitar buttressed by Bowie’s distorted Baldwin piano, while synthesizers, serving as a string section, drone through the final minutes, while at least two dubs of Bowie’s saxophone appear in the last verses (at times, it sounds like Andy Mackay’s work on early Roxy Music records). The chirping riff that Bowie had played on toy piano (owned by Thibault’s 8-year-old daughter) is prominent in the final mix. 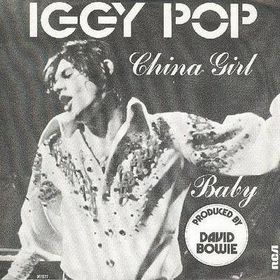 Of course, “China Girl,” for most of the world, is a David Bowie song. The Bowie single’s popularity has made the original “China Girl” into a successor: Pop’s recording now sounds like a bizarre sequel to Bowie’s, a piece of sonic vandalism done to an ’80s classic.

Bowie’s “China Girl” was one of his trio of MTV-fueled hit singles in 1983, the glossy new testament appended to his knottier early work. And where “Let’s Dance” was a rousing call to the floor and “Modern Love” cloaked its paranoiac sentiments with a call-and-response chorus, “China Girl” was slick anomie. The track’s sonic perfection, a feeling that all impurities had been refined away, furthered its cold sense of irony, its deliberate invocation of stereotypes, from Nile Rodgers’ “Chinese” guitar riff that opens the song, to the way Bowie mocks how the girl says “mouth,” to its high-end video, where Bowie, dressed like an Old Etonian, pats the head of his pyjama-clad “Chinese” girl as if he had bagged her on safari (while also making a disturbing visual play on Eddie Adams’ “Execution of a Vietcong Guerrilla” photograph); the girl has dragon lady fingernails, Bowie courts her by slanting his eyes, and it culminates in a scene shot in Sydney’s Chinatown district, where Bowie hurls a bowl of rice into the air.

Bowie cut “China Girl” in part to help Pop, who was broke and barely recording in the early ’80s, and he’d record a half-dozen more Pop compositions or co-compositions over the next five years. It wasn’t just altruism: Bowie’s frequent recycling of Pop collaborations, and increased use of covers in general, suggested a vicious decline in the pace and quality of Bowie’s songwriting in the ’80s, a decade Bowie spent in comfortable indifference, shot through with occasional bursts of midlife anxiety.

In 1982 Bowie, with a newly-signed EMI contract, recognized in “China Girl” a potential smash that he and Pop had obscured in the studio. Even the live versions of the song the two had played in 1977 sounded far more commercial, driven by Hunt Sales’ frenetic drumming and Bowie’s organ playing, more “96 Tears” than Krautrock drone. (Bowie had intended “China Girl” to be the lead-off single of Let’s Dance until Rodgers convinced him to go with the title track).

Where Pop sings the original in a building frenzy, Bowie’s vocal in the remake is cool, assured, even playful (the lilting run of high notes on “wake up in the mor-ning,” the repetition of “she says…” ), while the build to the “whites of my eyes” bridge is more a demonstration of power. Everything fits, everything has its place, from the way Carmine Rojas’ bass lags the beat (and moves to a staccato sequence in the last verses), to the precise drum fills (either Tony Thompson or Omar Hakim) imbued with the Power Station’s trademark ambient sound, to the placid wash of synthesizers and keyboards that suffuse the track. Bowie and Rodgers layered the track with a string of hooks (the new ‘oh-oh-oh-OH-oh-oh” intro, Rodgers’ “Chinese” guitar riff, echoed on keyboards3, and two Stevie Ray Vaughan guitar solos to close it out).

Was Bowie’s remake was a desecration of Pop’s desperate original? Did it turn Pop’s self-evisceration into “a cheesy pop song” (as Hugo Wilcken wrote)? Or was it somehow closer, via its mandarin disco sound, to what Pop had been trying to get at? Bowie, talking about the song at the end of the last century, said “China Girl” was about “invasion and exploitation,” and if so, Bowie was by far the more adept exploiter. His perspective was wider, his sense of self-loathing, though far more cloaked than Pop’s, was possibly greater. Pop was too much in his own shadow; Bowie saw the rot, the sense of love as corruption, as being just a lesser form of cultural toxin, far more clearly—he shone it up, he sold it well. 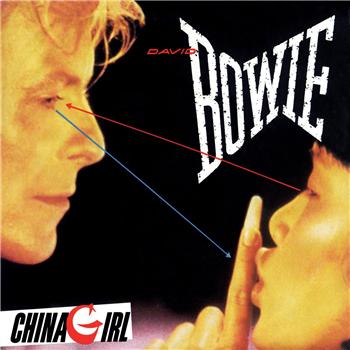 Pop’s “China Girl” was recorded in July-August 1976, in Château d’Hérouville and Musicland, Munich, and was released as a single in the UK in May 1977 (RCA PB  9093). The Bowie remake was cut at the Power Station in autumn 1982 and was issued as a single in May 1983 (EA 157, #2 UK, #10 US), its performance helped by the David Mallett-directed video, featuring the New Zealand model Geeling Ng (who Bowie briefly dated) and an often-censored shot of Bowie’s ass. Bowie and Pop would both play the song regularly on tour, with Bowie performing it alone on acoustic guitar for the Bridge benefit concert in 1996.

1 Neil Young’s “Pocahontas,” which is a lost cousin to “China Girl,” was written around the same time, and also features a cameo appearance by Marlon Brando.

2 This entry appears at the peak of the “Tiger Mother” mania, which is the latest incarnation of “the Chinese will bury us” national death-crisis storyline that’s been a regular feature in the U.S. over the past decade. Oliver Wang’s two–part response is worth a read.

3 Nile Rodgers, interviewed by David Buckley, said he wrote his “Chinese” guitar riff in part because he was flummoxed by the song’s ambiguities. “In black music, if you have a song called ‘China Girl’ it had damn better convey some message about a girl you met in China or something…You call a song ‘Let’s Dance’ you damn well better make sure people dance to it.” While Rodgers feared he was “putting some bubblegum over some great artistic heavy record,” Bowie said he loved the riff.

Thanks to SEP for kicking up some ideas, and to Lance Hoskins for the Japanese band score to the Bowie “China Girl.”