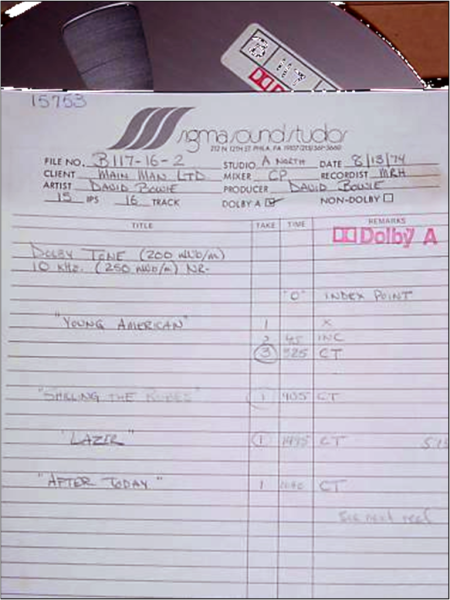 The rumors were true. Many Bowie researchers had concluded that “Shilling the Rubes,” long considered to be a lost Bowie classic, was only just a working title for Young Americans, a name that bootleggers occasionally slapped upon another outtake. Then in 2009, a reel from Bowie’s Sigma sessions supposedly turned up in a Philadelphia street fair (it’s speculated that the tape went astray (cough) from the rest of the Sigma reels, which are housed in the Drexel University Audio Archive) and it subsequently sold on eBay for $15,000.

The tape, apparently a rough mix from early in the sessions (13 August), featured an early take of “Young Americans,” a rewrite of the Astronettes song “I Am a Laser,” an early version of known YA outtake “After Today” and the grail itself: “Shilling the Rubes.”

Only about a minute’s worth of each track circulated, apparently as a sampler for prospective buyers on eBay. So all we have of “Rubes” are an eight-bar intro in which Mike Garson’s piano faces off against Andy Newmark’s drums, and the first verse, which is an intriguing bit of sleaze by Bowie, suggesting that “Rubes” was revisiting the love-as-prostitution theme of “Sweet Thing.” The fragment cuts off before the chorus (if there was one), thus retaining “Rubes”‘ status as the great unheard Bowie song. One imagines the whole four-minute track will turn up someday (though there’s already been a gold-plated reissue of Young Americans), but until then “Shilling The Rubes” will remain largely imaginary.

Recorded 13 August 1974. Perhaps only one person on the planet besides Bowie can listen to “Rubes” in its entirety. And there’s of course the chance that the whole story’s fraudulent (though the outtake really sounds genuine), which would be fitting given the song’s title, an equivalent to “fooling the suckers.”

This entry was posted on Thursday, October 7th, 2010 at 10:01 am and is filed under Middle RCA Years: 1973-1976. You can follow any responses to this entry through the RSS 2.0 feed. Both comments and pings are currently closed.

12 Responses to Shilling The Rubes