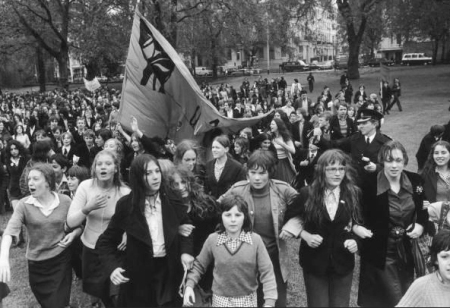 Cream’s “I Feel Free,” a staple of the early Spiders From Mars shows, was both a crowd-pleaser (it was a hit song in a set mainly consisting of unreleased material) and a means to let Mick Ronson solo like a madman (“Width of a Circle” later filled this role). “I Feel Free” was a memory chain for Bowie, as his half-brother Terry had suffered an attack during a Cream concert in Bromley, as well as for Ronson, who had worshiped Cream as a teenager and who, in The Man Who Sold The World, had made a tribute album to them.

Bowie made a habit of almost covering the song on record. “I Feel Free” nearly made the cut for Pin-Ups, while another attempt during the Scary Monsters sessions in 1980 survives in bootlegs as an instrumental track. In 1992, Bowie finally cut “I Feel Free” for Black Tie White Noise. By then it had become an elegy for Terry Burns, who had killed himself in 1985, and a tribute to Ronson, who was dying of cancer and whose guitar solo on the track was among his last-recorded performances. Ronson died at age 47, a few days after the record was released.

The “I Feel Free” performance from Kingston Polytechnic on 6 May 1972 was later collected on RarestOneBowie, a semi-official bootleg released in the ’90s by Bowie’s estranged former management company. The Black Tie White Noise recording, an attempt at contemporary R&B as perpetuated by Nile Rodgers and with Bowie intoning the lyric in his lowest register, was cut ca. autumn 1992 and released in April 1993. The video features a 46-year-old Bowie at the height of his Dorian Gray period and a motley backing band that includes the Manhattan Transfer’s stunt doubles, an eyepatch-wearing man apparently hired to gyrate in place, and a Jimi Hendrix impersonator who mimes Ronson’s guitar solo.

Top: March by the Schools’ Action Union and the National Union of School Students, Speaker’s Corner, Hyde Park, 17 May 1972.

4 Responses to I Feel Free