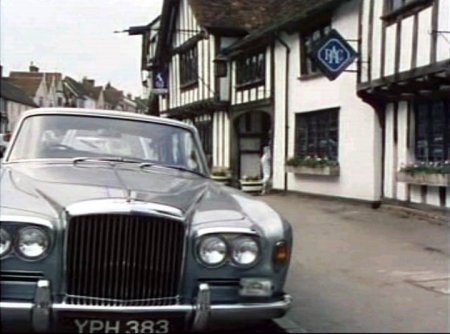 “Rupert the Riley,” the silliest and most endearing of Bowie outtakes, is Bowie’s ode to his car, a Riley Gamecock. With its sound effects, nightclub saxophone and its droning engine of piano, bass and hummed backing vocals (the last similar to those in Fairport Convention’s “Cajun Woman“), it could be a rough mix from Roxy Music’s first record.

The track was another go at creating a fake rock & roll singer. Bowie had already tried out Freddi Buretti (alleged lead singer of The Arnold Corns), and now he gave a song to a character known as Mickey or “Sparky” King (whose stage name, at least for this unreleased single, was Nick King). King was part of the Bowie circle in the early ’70s: in Bowie’s words, he was “a ‘club boy’ who I encouraged to sing.” King lived brightly, dangerously and not long—around 1974 he was stabbed to death by someone allegedly hired by one of his lovers, a colonel who King was attempting to blackmail. He left behind only this happy ghost of a song.

Recorded 23 April 1971 by the “Nick King All Stars” and never released, though it made the shortlist for Bowie’s greatest hits/rarities box set Sound and Vision. There are two versions, one with a Bowie lead vocal and the other (linked here) sung by the late Mr. King, with Bowie on backing vocals.

This entry was posted on Tuesday, February 23rd, 2010 at 8:16 am and is filed under Early RCA Years: 1971-1973. You can follow any responses to this entry through the RSS 2.0 feed. Both comments and pings are currently closed.

7 Responses to Rupert The Riley