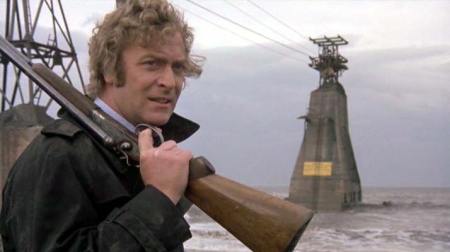 America is the noisiest country that ever existed.

On 27 January 1971 David Bowie finally came to America. He had dreamed of an entrance like Oscar Wilde’s: Wilde had stepped upon a New York City dock after a cross-Atlantic cruise and was met with a mob of reporters eager for choice witticisms. Instead Bowie had to endure a flight (which he hated) and when he landed at Dulles Airport, with his Lauren Bacall haircut and “wearing a purple maxi-coat and a white chiffon scarf” (Christopher Sandford), he was detained by customs agents, who searched him, sniggered at him and finally released him after an hour. Only Mercury publicist Ron Oberman and his immediate family were there to meet him (here’s a great photo from Bowie’s first night in the U.S., during which Bowie went to a kosher deli in Silver Spring, Md.).

Bowie was in the U.S. to promote The Man Who Sold the World. He brought only his guitar, a satchel of notebooks and few dresses selected by his wife. He went from Washington DC to New York to Chicago to Los Angeles, where he made friends with DJ/scenester Rodney Bingenheimer. He also met RCA house producer Tom Ayers, which set in motion a courtship that culminated in RCA signing Bowie later that year.

The United States of Bowie’s first visit was a fantastically prosperous country that had gone mad and now seemed to be at war with itself. Nineteen seventy-one would see the Attica prison uprising; anti-busing forces in Detroit blowing up school buses with dynamite; a radical group called Movement for Amerika planting bombs in banks across the country; the Weather Underground bombing the U.S. Capitol; another leftist group called Rise planning to poison the Chicago water supply. In Wilmington, NC, a band of vigilantes called Rights of White People assembled. Hippies were occasionally lynched in New Mexico—for example, a sixteen-year-old hippie girl who passed a bad check was shot to death by a storekeeper in Albuquerque (no charges filed). Crime rates hit staggering new levels, fueling a general belief that violence in America had become as common as it was random (in LA, a man drew a gun on Bowie and told him to “kiss my ass”).*

Bowie traveled through America in absorption: listening to top 40 radio (“Rose Garden,” “Stoney End,” “Groove Me”), meeting producers and starlets, gorging on new records (in San Francisco, Bowie heard a Stooges LP for the first time). On sheets of hotel stationery he wrote out his ideas for a fake rock star, inspired by another new find, the Legendary Stardust Cowboy. Perhaps he’d name the plastic rock singer Iggy.

“Hang Onto Yourself” (or “Hang On To Yourself,” depending which record it’s on) is the fruit of Bowie’s U.S. trip. A rock & roll blast, a groupie sex song, it was first recorded at a session where Bowie met Gene Vincent. Tom Ayers had introduced Bowie and Vincent in LA and, depending on who you believe, Bowie jammed with Vincent on a studio demo of “Hang Onto Yourself,” or Vincent was at the demo session but didn’t play, or Vincent had utterly nothing to do with it. Bowie would use one of Vincent’s signature stage moves (crouching at the mike with his injured leg behind him) in his Ziggy Stardust act; Vincent died of a stomach ulcer some eight months after meeting Bowie. 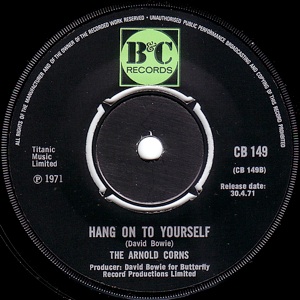 Bowie came back to the UK with his demo of “Hang Onto Yourself,” which was still a sketch—just a single verse, a chorus and the makings of what would be the song’s guitar hook. Bowie initially used the song for the first draft of his “fake rock star” project, where he wrote and produced songs for a Dulwich College band The Arnold Corns and their cherubic lead non-singer Freddi Burretti (more on this when we reach “Moonage Daydream”).

The demo and the Corns versions of “Hang Onto Yourself” are plodding and underwritten, and seem to be a botched attempt to mimic the Velvet Underground’s “Rock and Roll” (the line “and me, I’m on the radio show” echoes Lou Reed’s “and me, I’m in a rock & roll band”). The Corns single ends with a minute or so of elaborate grunting, suggesting that once again Bowie was parodying Marc Bolan.

“Hang Onto Yourself”‘s main riff (it opens the track and follows the end of the choruses) is also storied plagiarism—it seems to be nicking The Move’s “Fire Brigade,” which in turn had raided Eddie Cochran’s “Something Else.” The tradition continued, as the Sex Pistols’ “God Save The Queen” in part ripped off “Hang Onto Yourself” (Glen Matlock admitted the Pistols nicked a number of Spiders riffs, while future Pistols guitarist Steve Jones actually stole the Spiders’ gear, taking the line “the bitter comes out better on a stolen guitar” literally).

Throughout much of 1971 Bowie and his reconstituted band of Mick Ronson, Woody Woodmansey and Trevor Bolder kept up a brutal rehearsal pace, often playing all night in the top room of a Beckenham pub. Over the months they honed Bowie’s tentative rockers like “Hang Onto Yourself” into hard shapes. The version of “Hang Onto Yourself” cut for the Ziggy Stardust LP is faster and has better dynamics—much of the chord structure has been moved up a step (so the signature riff is now D/C/G, compared with C/Bb/F in the Arnold Corns version), Bowie’s lyric is saucier (“she’s a funky-thigh collector,” “we move like tigers on vaseline”) and Bowie now softly insinuates the chorus, rather than belting it out. Trevor Bolder’s bass holds the track together in a tight grip, while Ronson, in his own words, strapped his guitar on “and thrashed it to death, basically.”

It was a classic lead-off song, and Bowie opened most of the Spiders from Mars sets of 1972-1973 with it, as well as many of his 1978 concerts (a Philadelphia recording leads off Stage, the 2-LP live record culled from that tour). Bowie revived “Hang Onto Yourself” on his 1983 tour, letting his rent-a-gun guitarist Stevie Ray Vaughan play with it, and brought it back again for his “Reality” tour of the mid-2000s.

Top:  Michael Caine in Get Carter.

* most examples of 1971 America are taken from Rick Perlstein’s essential Nixonland.

This entry was posted on Monday, February 15th, 2010 at 10:20 am and is filed under The Rise and Fall of Ziggy Stardust and the Spiders From Mars: 1972. You can follow any responses to this entry through the RSS 2.0 feed. Both comments and pings are currently closed.

7 Responses to Hang Onto Yourself