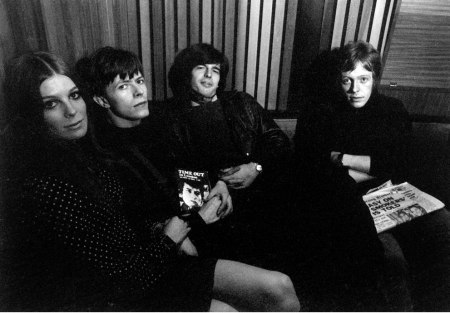 He had avoided it as long as possible, but by the summer of 1968 David Bowie had become a hippie. He grew his hair down to his shoulders, sat around his manager’s house naked, cooked macrobiotic meals, joined a communal arts lab and, saddest of all, formed a folk music trio.

This was Turquoise, soon to be rechristened Feathers. Turquoise was founded by Bowie, his first serious girlfriend Hermione Farthingale, ballet dancer and amateur singer, and London folkie (and former guitarist for The Misunderstood) Tony Hill, who soon was replaced by John “Hutch” Hutchinson, former lead guitarist of Bowie’s old band The Buzz. Hutchinson had recently returned to the UK from Canada, his head full of the new Canadian folk music (Gordon Lightfoot, Joni Mitchell, Leonard Cohen), and he found that Bowie now “was into softer things…he didn’t need a band to pump it out anymore.”

Following in the path of grubby hippie groups before them and the countless numbers after them, Feathers played a meager circuit of university halls and folk clubs. It was a bit of passive rebellion on Bowie’s part—his manager Ken Pitt, desperate to get Bowie some paying gigs, had pushed him to develop a cabaret act, which went nowhere, and landed him a brief spot in a Lyons Maid “Luv” ice cream commercial (directed by Ridley Scott!). Bowie later described Turquoise/Feathers as being in part just a device to spend more time with his girlfriend, but the group also reflected Bowie’s belief that since he wasn’t getting paid anyhow, why not form a “non-commercial” band that performed just for the joy of it?

So Feathers played sets consisting of recited poetry, a few recent Bowie compositions (like “When I’m Five”) and some Jacques Brel covers, interspersed with mime routines. “Ghastly,” the mime Lindsay Kemp recalls in Marc Spitz’s new Bowie biography. The band’s enforced democratic vibe (everyone sang, everyone played guitar) resulted in, as it typically does, a determined sense of mediocrity.

The only Feathers record was “Ching-a-ling,” which Tony Visconti recorded on the sly—booking a session at Trident Studios without managerial approval and hoping the track would get picked up by a label. The b-side was meant to be Tony Hill’s “Back to Where You’ve Never Been,” but as Hill was suddenly replaced by Hutchinson, that idea naturally fell through. “Ching-a-Ling” is not bad and not memorable: it simply floats along like a soap bubble. It may be the most depressing thing that Bowie recorded in the entire decade.

Recorded on 24 October 1968 (Bowie’s sung verse is cut on most versions of the track; it’s no loss); on Deram Anthology (the full version finally appeared on the David Bowie reissue). Bowie and Hutchinson recorded a demo version in mid-April 1969.

This entry was posted on Wednesday, November 4th, 2009 at 10:19 am and is filed under Deram Years: 1966-1968. You can follow any responses to this entry through the RSS 2.0 feed. Both comments and pings are currently closed.