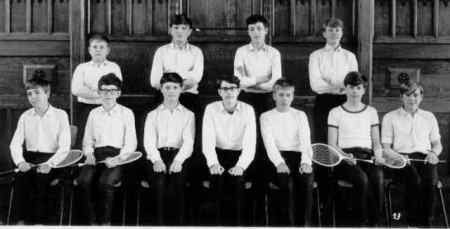 The great lost Bowie song of the 1960s, “Silver Treetop School For Boys” is nostalgia tempered by psychedelia. A boy notes the boundaries and the landmarks of his school days. All falls within the standard range, to the point of being generic memory—rolling the cricket pitch, headmasters barking commands—until the bridge, when the singer is called out to see “a thousand boys and masters” sitting upon the cricket ground together and sharing joints. It’s an edenic image of cross-generational harmony that’s tinged with the ominous (the English master who thinks he’s a purple mouse, the head “who’s usually sad…swinging from a tree”).

“Silver Treetop” (especially in its interpretation by the mysterious band The Slender Plenty) is a study in relentlessness, its lyric tightly welded to its melody. The first three verses are set back-to-back-to-back with just a measure’s worth of “yeah yeah”s separating them; the dense lyric (there’s a syllable seemingly for every piano note played) is countered by a descending guitar riff that hits at the start of each bar (and “SIL-VER-TREE-TOP-SCHOOL-FOR-BOYS” is a basically a guitar riff transposed to words). The bridge, with its longer phrasing and its leap to falsetto, breaks the pattern, followed by an empty verse of “la la” singing (the Beatstalkers do a guitar solo) and ends with its masters-and-boys communal tripping.

In the months while he was waiting for Deram to release his debut record, Bowie recorded a few demos, hoping to place songs with up-and-coming bands. He was allegedly inspired to write “Silver Treetop” after reading in the newspaper about a pot-smoking scandal at Lancing College (Bowie’s own formal education had ended in 1963 when he left Bromley Tech to be a pop idol, or so he told his housemaster).

Ken Pitt sent Bowie and the Riot Squad’s demo of “Silver Treetop” to producer Steve Rowland in May 1967. A few months later, two UK bands cut it–Glasgow’s The Beatstalkers (who shared Pitt as a manager and who were known for their riot-inducing live act and their tartan trousers) and The Slender Plenty, of whom almost nothing is known. Listen and compare (for me, the Slender Plenty’s version crushes the Beatstalkers’). Various writers have claimed that Bowie is singing backup on both, either or neither.

Bowie’s demo was recorded ca. April-May 1967; the Beatstalkers’ version was issued as CBS 3105 c/w “Sugar Chocolate Machine” in December ’67; and the Slender Plenty’s was released in September ’67 as Polydor 56189 c/w “I’ve Lost a Friend And Found A Lover.” Neither of the singles charted.

P.S.  I don’t know how the song’s title should be written. References like Pegg’s guide list it as “Silver Treetop,” where the labels of both the Slender Plenty and the Beatstalkers singles have it as “Silver Tree Top.” I go with the former simply because “treetop” looks better when written.

This entry was posted on Thursday, October 8th, 2009 at 2:06 pm and is filed under Deram Years: 1966-1968. You can follow any responses to this entry through the RSS 2.0 feed. Both comments and pings are currently closed.