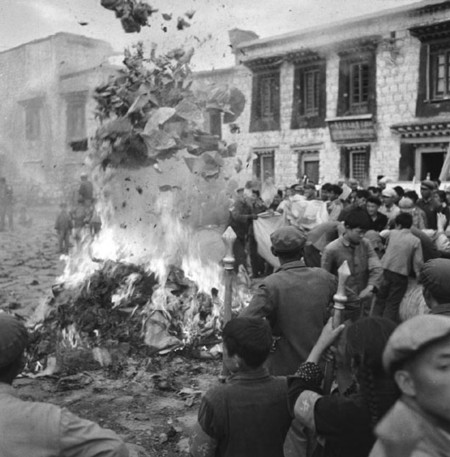 I want to go to Tibet. It’s a fascinating place, y’know. I’d like to take a holiday and have a look inside the monasteries. The Tibetan monks, Lamas, bury themselves inside mountains for weeks, and only eat every three days. They’re ridiculous—and it’s said they live for centuries…As far as I’m concerned the whole idea of Western life—that’s the life we live now—is wrong. These are hard convictions to put into songs, though.

I stumbled into the Buddhist Society in London when I was about seventeen. Sitting in front of me at the desk was a Tibetan lama, and he looked up and he said “Are you looking for me”? He had a bad grasp of English and in fact was saying “Who are you looking for?” But I needed him to say “You’re looking for me.”

“Silly Boy Blue” is gorgeous and stately; it proceeds slowly past us like a monarch. A British teenager’s attempt to depict Tibetan culture in a pop song seems like it can’t help but be ridiculous, but Bowie, humbled by the grandeur of a culture that’s fired his imagination, writes a sweet pop hymn with a taste of majesty. It’s his first great song.

Most of all, it’s got a joy of a melody—one so memorable that you could sing lines like “yak butter statues that melt in the sun” over it, as Bowie does, and still come off all right. (That said, there are yak butter statues all over Tibet—as surreal imagery goes, it’s pretty literal in this case.)

Bowie’s interest in Tibetan Buddhism wasn’t a sudden trendy affectation—he had begun exploring the religion when he was in his mid-teens, first inspired by reading Heinrich Harrer’s 1952 book Seven Years in Tibet, and he eventually met and befriended the Tibetan lama Chimi Youngdong Rimpoche, who was exiled in London. Bowie even fantasized about becoming a Buddhist monk—cropping his hair and dyeing it black, wearing saffron robes and even changing his skin color (he’d have to settle for becoming Ziggy). Buddhism was an early influence in his songs: he had meant for the backing chorus of his single “Baby Loves That Way” to sound like chanting monks.

“Silly Boy Blue” is structured as four verses, divided in pairs by a bridge. As if emulating a long climb up a mountain, the song changes key on the third (wordless) verse. The first recorded version of the song, recorded in late ’65 with the Lower Third, had a basic Beatles knock-off rhythm that seemed ill-suited for the song’s aspirations, so here Bowie’s used a classic Hal Blaine “on the four” beat for dynamic effect—it’s a variant of Phil Spector tracks like “Be My Baby” and “Zip-a-Dee Doo-Dah.”

It’s telling that Bowie’s lyric, while full of Tibetan Buddhist imagery (the references to chelas and overselves, etc.), still sympathizes with the young monk who can’t pay attention, who’s a bit at odds with his culture. Even in the midst of worship, Bowie has an eye for the heretics.

Recorded on 8 December 1966; on David Bowie. The Lower Third demo (whose lyric is completely different) has never been released but is found on bootlegs like The Forgotten Songs of David Robert Jones. Bowie recorded “Silly Boy Blue” twice in BBC sessions, most notably in a 1968 performance featuring an elaborate Tony Visconti arrangement complete with gongs and chimes (on Bowie at the Beeb). It was covered by Billy Fury in the same year.

Bowie’s 1997 “Seven Years in Tibet” is a thematic sequel of sorts, while Bowie revived “Silly Boy Blue” for his failed Toy LP around 2000 and performed it at the Tibet House Benefit at Carnegie Hall in February 2001, where it sounded as if he had discovered a lost folk song and sung it back to life. Nicholas Pegg notes that Right Said Fred’s 1991 hit “Don’t Talk Just Kiss” nicks some of the verse melody.