Did You Ever Have a Dream 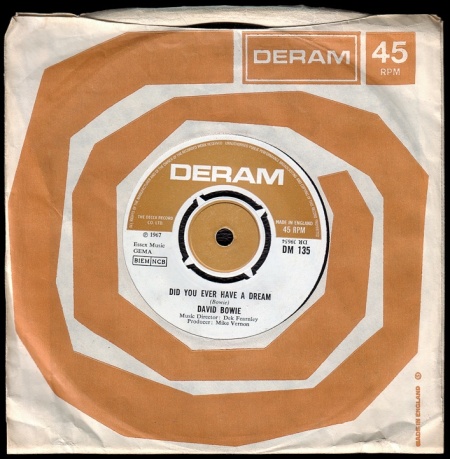 Did You Ever Have a Dream.

Recorded in the second session for Bowie’s debut LP, “Did You Ever Have a Dream” only slipped out as a B-side almost a year later. It’s a bit odd that the track was so neglected as it’s one of the more straightforward pop songs Bowie recorded in the period, although its lyric is about the joys of astral projection.

Bowie could play both sides of the net at once: in the same session he lampooned ’60s hipsters with “Join the Gang,” he also dashed out a dippy song that seems desperately wedded to its period; it’s the sort of record that caters to the worst affectations of its audience.

Still, it’s fun enough in sparing doses. Inspirational verse: “You can walk around in New York while you sleep in Penge.”

Recorded 24 November 1966 and released in July 1967 as the b-side to “Love You Till Tuesday”; on the Deram Anthology.

This entry was posted on Tuesday, September 8th, 2009 at 1:28 pm and is filed under Deram Years: 1966-1968. You can follow any responses to this entry through the RSS 2.0 feed. Both comments and pings are currently closed.

4 Responses to Did You Ever Have a Dream