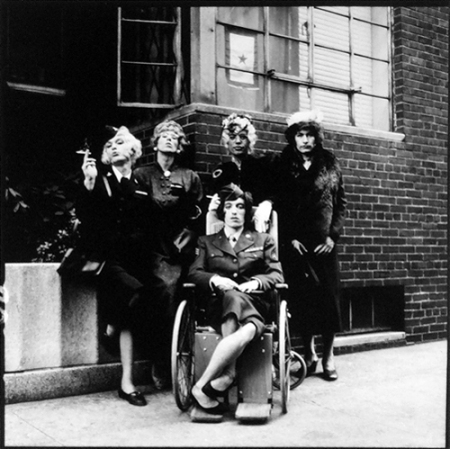 Following the success of The Beatles, States Worship [in the UK] has been replaced by a cool, if deep, chauvinism, but as it is impossible to think of England as having no past, this is dealt with by treating history as a vast boutique full of military uniforms, grannie shoes and spectacles…by wrenching these objects out of their historical context they are rendered harmless.

She’s Got Medals” is a dirty joke, a shaggy dog story as recounted by old friends over an evening in a pub. A local woman disguises herself as a man to join the army during the war (“passed the medical/don’t ask me how it’s done“) until, tired of “picking up girls…and shaving her curls,” she deserts under fire and returns to her original sex. Like “Uncle Arthur,” the song suggests that behind every normal neighborhood figure (here a respectable older woman) lies eccentricity, lunacy or lurid scandal; it’s sung by Bowie in a wry stage-Cockney voice.

Bowie and his friend/collaborator Derek “Dek” Fearnley frame the song in a bizarre setting, from the twisted fanfare for winds that opens the track to the bridge, when Bowie delivers his lines over church organ followed by a surge of winds and thumping drums. It gets so over the top that Bowie winds up stepping on his own joke. (Bowie and Fearnley, neither of whom could read music, bought a book on music theory and instrumentation, Freda Dinn’s The Observer’s Book of Music, and basically used the Deram studio and its session men as their entry-level workshop.)

The odd arrangement seems meant to distract you from noticing that the song’s a bit undercooked: the verses trundle along to a slowly descending piano line, and often two bars’ worth of Fearnley’s bass pad out the verses. The chorus is simply a repeat of the end bars of the verse, only slowed down and sung by a drunken pub choir.

Bowie has never revived this song: pity, as it could’ve worked if, say, Mick Ronson had rearranged it as a guitar-heavy glam track. Still, it’s the first draft of later Bowie gender-bender staples like “Queen Bitch.”

Photo: Jerry Schatzberg, The Rolling Stones in uniform, “Have You Seen Your Mother, Baby, Standing in the Shadow?” single, September 1966.

This entry was posted on Wednesday, September 2nd, 2009 at 7:44 am and is filed under David Bowie (s/t LP): 1967. You can follow any responses to this entry through the RSS 2.0 feed. You can leave a response, or trackback from your own site.

6 Responses to She’s Got Medals