I Pity The Fool 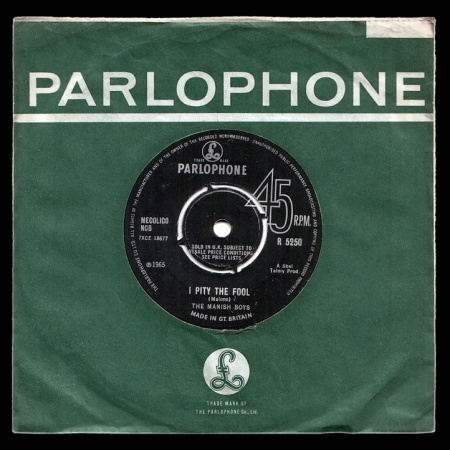 Only a few times in Bowie’s life has he seemed directly inspired by black popular music: the “Young Americans” era, arguably the Nile Rodgers-produced “Let’s Dance” period, and the mid-’60s. “I Pity the Fool” is Bowie covering Bobby “Blue” Bland, and it’s about as close to straight-up soul as DB would ever attempt.

Bland’s “I Pity the Fool,” which topped the US R&B charts in 1961, is lyrically a feint. The verse, which Bland sings with a slow, dismissive coolness, suggests that the singer has moved on, that he just has pity for whoever his two-timing woman ropes in next. Then the bridge (there’s not really a chorus: the song’s main hook, the descending “I pity the fool” phrase, starts the verse) reveals that the singer isn’t out of the mess yet—he’s still entwined with her, there’s no way out, and it’s killing him. Bland, backed by a righteous horn section, just howls the lines, infusing them with self-hatred and disgust: “LOOK at the PEOPLE!!…They just STANDIN’ there, watching you make a FOOL of ME!”

It’s asking a great deal for an 18-year-old kid to match this, and Bowie can’t. Wisely, though, he reduces the emotional spectrum to a teenager’s primary colors—arrogance and indignation at being shamed in public. He’s at his best in the bridge, when he can snarl and howl as petulantly as he can.

It helps that Bowie’s got a better band this time ’round (the Manish Boys, who he joined just after cutting “Liza Jane”) and a savvier producer, the American expat Shel Talmy, who recorded the Who doing “Anyway Anyhow Anywhere” and “I Can’t Explain” around the same time as this cut. One of Talmy’s favorite session pros, Jimmy Page, is on lead guitar, though Page isn’t doing much more than tracing the lines of Bland’s regular guitarist, Wayne Bennett. Woolf Byrne and Paul Rodriguez are the horns, a pale reflection of the killer six-person brass unit that sharpens Bland’s single.

Released 5 March 1965 as The Manish Boys, Parlophone 5250 (alt. take issued without notice on Early On).

This entry was posted on Monday, August 3rd, 2009 at 2:19 pm and is filed under First Singles: 1964-1965. You can follow any responses to this entry through the RSS 2.0 feed. Both comments and pings are currently closed.

2 Responses to I Pity The Fool